The Works Progress Administration (WPA) was a part of President Franklin Delano Roosevelt's New Deal that lasted from 1935-1942. In Milwaukee, the WPA had a division that provided work for women and African Americans. This was an integrated project, a rarity at the time. Workers began with simple handicrafts, like scrapbooks, but as their skills developed, they began to make more complex crafts such as dolls (like the Honey Chile doll depicted here), rugs, and furniture. At any one time, the Milwaukee WPA had 250-1,000 people working for them and some of the women went on to start their own craft shops. The pieces at the Milwaukee Public Museum comprise the highest quality collection to come from the Works Progress Administration handicrafts era in Milwaukee. Learn more about this collection at www.mpm.edu/collections/research/history/wpa-mhp 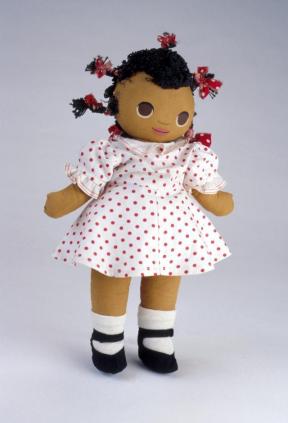