Mesoamerica, a term used for the community of cultures found in southern Mexico and northern Central America from 2500 B.C. to A.D 1500, is best known for the monumental artistic and intellectual achievements of the Maya and the military might of the Aztecs. 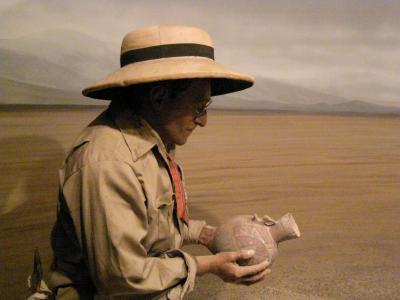 But these were only two of dozens of civilizations extant at different times and places in Mesoamerica. The remarkable accurate calendrical system and beautifully styled hieroglyphic writing commonly associated with Classic Maya (A.D. 300-900) actually owe much of their development to an earlier group, the Olmec (1500-300 B.C.), whose heartland along the Gulf Coast of Mexico was outside the Maya core area in Guatemala and Yucatan.

The Aztecs were only the most recent in a succession of powerful states dominating the highland valleys of central Mexico. A major center has arisen at Teotihuacan as early as A.D. 300, only to collapse a few centuries later, leaving a political and cultural vacuum eventually filled by the Toltecs with their capital at Tula. This aggressive group ultimately spread its control to the Yucatan, creating a Toltec-Maya culture best seen in the blending of architectural elements at the site of Chichen Itza. The Toltecs were in turn supplanted in central Mexico in the 15th century by the Aztecs or Mexica, originally one of several obscure nomadic groups. In 1519, Cortes allied his small army with several dissident Indian peoples, providing himself the strength necessary to defeat the Aztecs two years later.

The second area of Nuclear America encompassed the Central Andes of Peru and Bolivia, including both the intermontane valleys of the highlands and the dry coastal plains. As in Mesoamerica, complex civilizations began to develop in the Andes by 1500 B.C., possibly with some influence from the former area. Somewhat similar to the Olmec, both in time and content, the Chavin culture represented an early monumental art style which spread over the much of the Peruvian area. It was followed by several regional cultures, two of which, the Mochia in the north and the Nazca in the south, were outstanding for their ceramic and textile arts.

These and other localized cultures, which flourished between A.D. 200-600, were eclipsed by the dual empires of Huari and Tiahuanaco which together dominated most of the Central Andes until A.D. 1000. After that date the area was again characterized by a variety of local political units, chief among which was the Chimu, successor to the Mochica on the north coast.

During the 1400s, a small southern group moved into the highlands around Cuzco and quickly came to dominate the area. In less than a century the Inca empire controlled the entire Andean area from Ecuador to northern Chile. The Incas had probably reached their limit of expansion when the Spaniards, led by Pizarro, arrived in 1532 and took advantage of an unstable political situation, in this case the aftermath of a civil war between two rival brothers for the Inca throne.

The two major areas of Mesoamerica and the Central Andes are separated by an Intermediate Area including lower Central America, Colombia and Ecuador. Undoubtedly stimulated from both north and south, this region was the homeland of numerous cultures notable for exquisite craftsmanship in metal, ceramics, and stone.