“The greatest enemy of knowledge is not ignorance; it is the illusion of knowledge.”
- Daniel J. Boorstin, American Historian

More Than Meets the Eclipse Eye 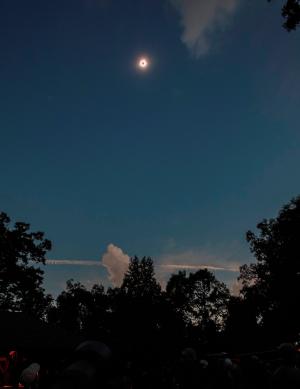 Our eyes are amazing. They take in an abundance of color and endless motion every day. Yet, we know there is so much more we don’t see.

Take a total solar eclipse. I have been fortunate to see six of them across the globe. As I recall, my eyes paint an exquisite scene for my brain to process. The ebony moon is blanketed by the Sun’s white-hot corona. The sky is altered strangely. It glows adoringly in cascading shades of blue. The landscape surrounding me is suddenly eerie dark, but not black.

Gazing through a small telescope, my eye probes the enhanced eclipse. I spot the garish pink solar prominences. The feathery corona is quickly scanned for any patterns and details. I search for a faint star or two. Amazing as this magnified view is, my eyes need to turn back to the glorious eclipse sky.

Between eclipses, I encounter many great photos of this rare sky event. A few weeks ago, another one stunned me. It combined 55 different exposures into one eclipse portrait. I have seen similar compilations, but thought I’d share this one with you. (I secretly wish I had 55 eyes and could see all of this in real time; I’d need a bigger brain to process all the visual sensations!)

This masterful total solar eclipse picture was assembled by Miloslav Druckmuller and Andreas Moller from the Czech Republic — skilled photographers with savvy computer skills. It captures the December 14, 2020 total solar eclipse from Argentina with settings ranging from 1/640 of a second to a lengthy three seconds. The results reveal a stunning range of features for totality!

Moon: Notice the details on the very dim lunar surface. This “new moon” is usually invisible. The sunlight side is facing away from Earth. However, sunlight bounces off the Earth — like a mirror — and beams back on to the moon where a camera captures its faint details.

Stars: Typically, an eclipse gazer will spot a bright planet or two and maybe one or two bright stars. That’s it. With the long exposure of the camera, I can spot over a 100 stars in the image above.

Comet: Can you spot the comet? Look near the bottom left. The closer these icy rocks get to the sun, more ice sublimates and their impressive tails grow longer. I have never heard of anyone seeing a comet with their eyes during a total solar eclipse.

Corona: The sun is a boiling nuclear pot of plasma. Energy and magnetic fields are constantly churning throughout our star. This produces the sun’s dynamic and blistering hot corona. This willowy outer atmosphere is constantly shifting as it reacts to the sun's evolving magnetic fields. Studying the corona during an eclipse helps solar scientists better predict the sun’s space weather. This weather mainly consists of charged particles that bombard the Earth—affecting our astronauts and all kinds of satellites that we live by every day. 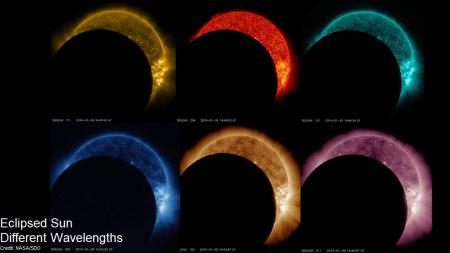 Prominences: These gigantic violent bursts emanate from the sun’s surface, usually near a sunspot. They show up very bright against a dark sky. Sometimes, the human eye can catch one or two during the total eclipse. Through a telescope, they really pop, and you get a real sense of their energy. Their gorgeous pink color is caused by extremely hot hydrogen gas. In the picture, you can see these ruby prominences from every quadrant on the sun’s surface.

We humans keep extending our eyes to observe new worlds. The first major leap came with two big inventions more than 400 years ago: the microscope and the telescope. In 1800, we discovered infrared “light” and later unlocked the entire electromagnetic spectrum. These monumental improvements have extended our vision in astonishing ways. It makes one wonder, what's next?

Back to the Paleogene 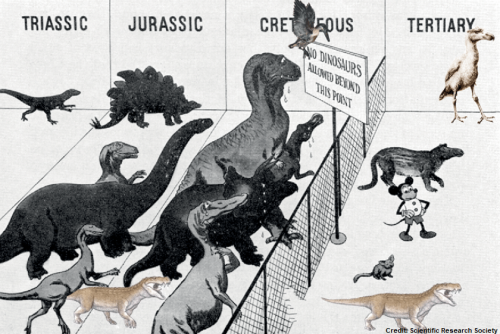 Last month, we took the time tunnel all the way back to the very beginning—the Big Bang, which kickstarted the entire universe 13.8 billion years ago. This month, we’ll time travel “only” 66 million years in the past. We’re heading back to the beginning of the Paleogene period, or the end of dinosaurs and 75% of all living species on Earth.

Paleogene is a Greek word. It means “ancient-born.” It represents the surviving life that flourished after the six-mile-wide asteroid impacted Earth and devastated the planet.

After the deadly cosmic collision, a downpour of rock and dust produced a worldwide thin layer of iridium. Geologists have named this ancient rock deposit the K-T Boundary. K is for Cretaceous and T is for Tertiary. New discoveries have led the International Stratigraphic Commission to use Paleogene (or Pg) instead of Tertiary. So, it is now known and the K-Pg Boundary. 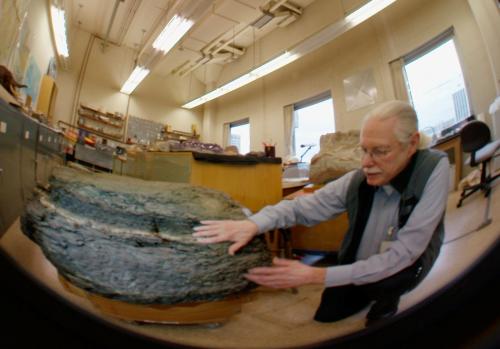 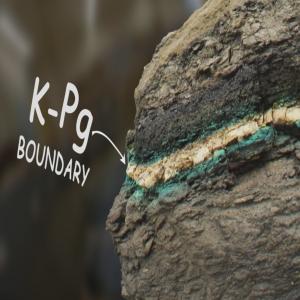 Our Geology department here at MPM has an ancient rock that showcases this transition period. Dr. Peter Sheehan, Curator Emeritus of Geology, is the Museum’s expert on the K-Pg boundary. He brought the rock back from Hell Creek, Montana. He notes that, based on new findings, the catastrophic event occurred 66 million years ago, not 65 million years, as previously reported for years. Science is always updating.

At this point in time, the entire history of the Earth changed. There are no dinosaur bones above this line. Who survived? Small mammals, some reptiles like lizards, turtles, snakes and crocodiles, frogs and salamanders, and some birds—which evolved from earlier dinosaurs—all endured the calamitous changes. So, in one sense, dinosaurs were not completely eliminated. 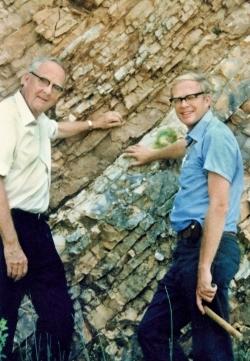 The K-Pg Boundary was first discovered in the small village in Italy called Gubbio. In these rocks, back in 1977, the father-and-son team of Luis and Walter Alvarez found a thin layer of clay with a high concentration of iridium. Iridium is a heavy element and very rare on Earth, but more common in asteroids and meteorites. The Alvarezes were the first to find the iridium, and since then, other scientists have found this thin clay layer at more than 100 places around the Earth! They also uncovered a rock called shocked quartz, which can only be formed by enormous powerful impacts.

When that asteroid hit 66 million years ago, the impact was so blisteringly hot, most of the asteroid just vaporized—turned to gas! The hot gas debris shot into the atmosphere, condensed, and slowly fell back to Earth. But the fallout stretched all over our planet, and is preserved in the clay layer we see today.

Finding the 100-mile-wide impact crater took skilled detective work. The crater is well hidden, but they found it underground in Mexico. It’s the smoking-gun evidence for this extinction event and the start of the Paleogene period. Today, it’s called the Chicxulub crater (CHEEK-shoo-loob), named after the nearby town. 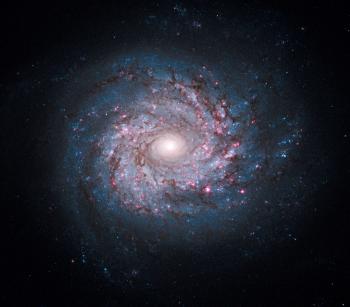 Curiously enough, there’s a galaxy in the constellation of Ursa Major, the Great Bear, called NGC 3982. Though light is the fastest thing in the universe, the starlight from this galaxy still takes 66 million years to reach our eyes. This means we are looking 66 million years into the past -- the same time the dinosaurs went extinct, and only 25% of all life survived to start the Paleogene.

Mark your calendars and cross your fingers for February 18. If all goes well, NASA will land its latest rover Perseverance on the planet Mars! A unique feature of this spacecraft is a helicopter called Ingenuity.

Perseverance will also drill and capture rocks in a metal tube. The plan is for a future mission to grab the Martian rock and dust samples and bring them back to Earth. As usual, one of the top goals for this mission is to look for signs of long-ago life on the red planet. 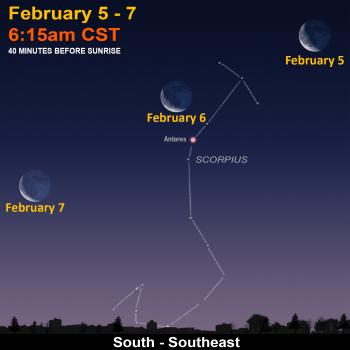 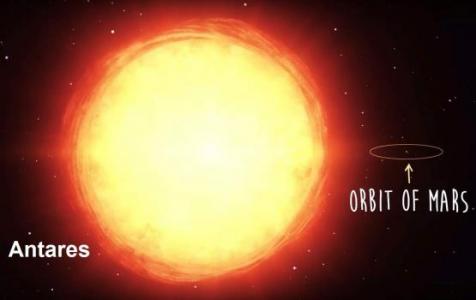 Watch for a waning crescent Moon near the red giant star Antares from February 5-7. Antares translated means “rival of Mars.” Antares is even larger than the orbital diameter of Mars, which is about 300 million miles. Our sun is less than 1 million miles wide at 864,000 miles.

Venus is getting impossible to see in the morning sky as it swings behind the sun. Venus reaches superior conjunction on March 26, 2021. It will reappear in the evening sky by late April or early May. 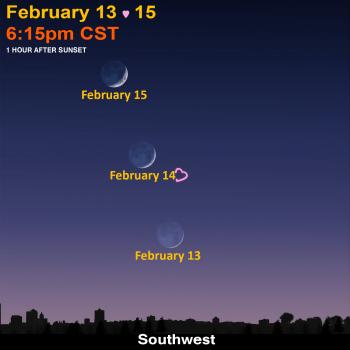 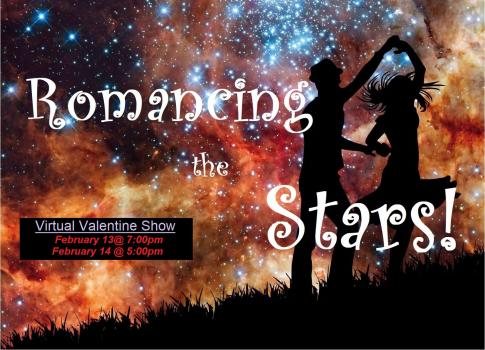 Sky-lovers can see the waxing crescent Moon return to the skies from February 13-15. For more Valentine’s sky sights, join us for our Romancing the Stars program February 13 or 14. 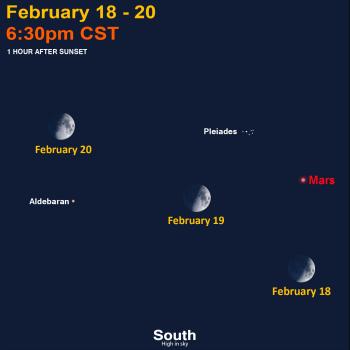 Mars has dimmed a bit since its brightest moments last October. Still, it shines almost as bright as the brightest stars. Watch the Moon glide by from February 18-20. Though you can’t see it, say "hi" to the Perseverance rover as it nears the red planet, landing on February 18. It left Earth on July 30, 2020. 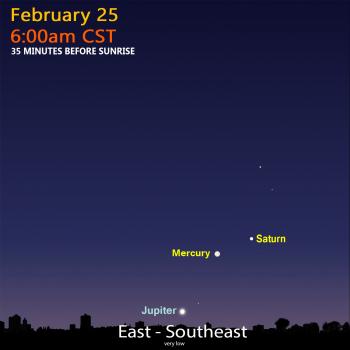 Jupiter and Saturn are gone, behind the sun, for most of the month. By late February, and with a little patience and fortitude, you might catch these gas giants in the morning skies. By late March, they will be much easier to spot. By August, these planets shine all night long.

Mercury always stays near the sun, but try to spot the little planet near its big siblings in late February.