The Hebior Mammoth is the most complete mammoth ever found in North America, with 85% of the bones recovered. Excavated in Kenosha County in the mid-1990s on the farm of John Hebior, the mammoth, found with stone tools and butchering marks, has been radiocarbon dated to about 14,500 years ago. The Hebior Mammoth is one of the earliest pieces of evidence of human occupation in North America, predating the Clovis culture by more than a thousand years. The Milwaukee Public Museum purchased the mammoth skeleton thanks to the generous support of local donors John Brander and Christine Rundblad. See a cast of the mammoth skeleton in the Museum's concourse. 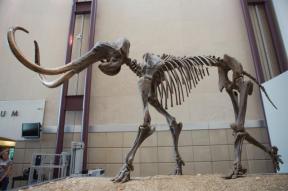