“Justice is like the north star, which is fixed, and all the rest revolve about it.”
- Confucius 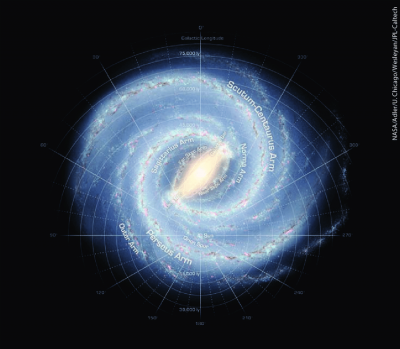 Here at the Planetarium, we often proclaim, “The stars are not moving above you; it’s the Earth spinning below your feet.” Well, that’s only partly true. The Earth does rotate very quickly, but the stars move even faster!

Stars are huge balls of hydrogen, mostly. Billions and billions of them whirl around the core of the Milky Way galaxy. At the Sun’s distance from the galaxy’s center, about 27 light years, stars speed along at 150 miles per second! Though racing rapidly, they still take about 230 million years to make one orbit around our galaxy.

Galactic stars do not move perfectly together in one great cosmic circle; they have random motions. Take the stars of the big dipper in the 200,000-year timelapse in the GIF below. Notice the dates. The time starts at 100,000 BC and runs to 100,000 AD. Long ago and far into the future, the Big Dipper will not look like a Big Dig Dipper.

We do not observe this speedy motion simply because our lifetimes are very comparatively short and the stars are extremely far way. How far? The closest star of the dipper is Megrez at 58 light years away, or 350 trillion miles. With present technology, our fastest spaceship travels at 10 miles per second. At that speed, it would take over a million years to reach Megrez!

Conversely, imagine a car speeding past you a block away at 150 miles per second. You probably wouldn’t even notice it. At best, you might spot the briefest flash of light. You would never know it was a car.

Our visual experience always depends on speed, size, and distance. The International Space Station (ISS) races along at five miles per second, or 17,000 miles per hour. At that speed, it orbits the Earth in 90 minutes. The astronauts are moving so quickly, they see a sunrise and sunset every 45 minutes. The ISS is as big as a football field, but it is 200 miles away from the surface of the Earth, so when we gaze into the night sky, ISS looks like a fairly bright, slow-moving star. 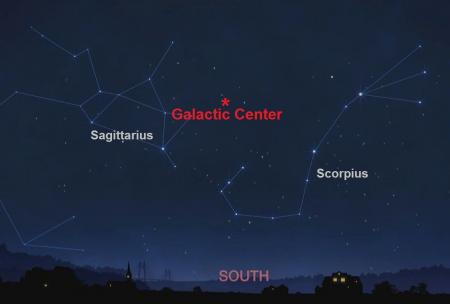 Like most city downtowns, our galactic core is densely backed and full of bright lights. We live way out in a distant suburb. If we resided in downtown Milky Way, our night sky would be ablaze with a myriad of stars as bright as Venus.

This discovery of our galactic location took awhile. You might think it would be easy to see where downtown is -- simply look for a bright concentration of stars. This is no problem when we look at other galaxies. Take the Andromeda galaxy for example; its bright galactic middle is obvious to the telescope’s eye. 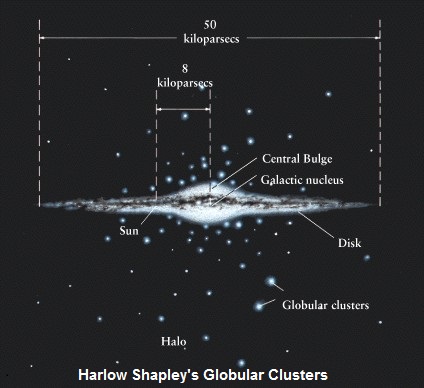 One attempt to discern our residence position was to simply count and map all the stars in every direction. Astronomer William Herschel (discoverer of Uranus) took on this project and, in 1785, drew a map of the Milky Way, placing the Sun nearly at the center.

Around 1920, astronomer Harlow Shapley deduced our Solar System’s location by mapping the position and distance of globular star clusters. The results, while not perfect, suggested the constellation of Sagittarius was the center of the galaxy. Once again, however, astronomers did not see anything resembling a bright galactic core.

The reason galaxy explorers were thrown off was because of the dark nebulae between the Sun and the galaxy’s center. These huge gas and dense dust clouds obscure the core’s bright light. A breakthrough occurred when scientists realized they can see through the dark, dusty nebulae. How? Just as we can detect a heat source in a dark room, astronomers see “light,” or energy, through the dark clouds with radio and infrared telescopes. Unknowingly, a confirmation of the galaxy’s center came from Karl Jansky’s radio antenna in 1931. He detected a constant radio source coming from the constellation of Sagittarius.

Today astronomers have added x-ray telescopes to their investigative line-up and have confirmed the existence of a supermassive black hole at the center of the Milky Way galaxy. They have mapped stars orbiting the massive gravity well. This animation shows the location of stars for 18 years, from 1995 to 2013. Notice how they move faster as they near the black hole.

Our galaxy’s central black hole is now called Sagittarius A*. It has the mass of over 4 million Suns severely packed into a space only 14 million miles across. (For comparison, our sun is a little less than one million mile wide.) Within one parsec, or 3.26 light years of the galactic center, astronomers estimate there are 10 million stars! Within one parsec of the Sun, there are no other stars. 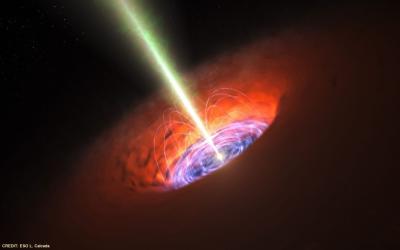 It took us awhile to find the location of downtown Milky Way. It turns out to be an extremely energetic and vibrant place... Maybe best if we keep our safe distance. 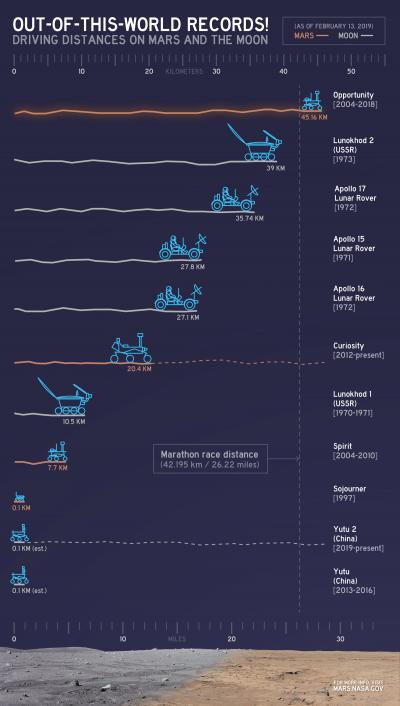 Completing a marathon in 15 years may be rather slow, but if you are a rover on Mars, it’s quite the accomplishment!

Last month, we wistfully said farewell to NASA’s Opportunity rover. The plucky robot roamed over the red planet for over 28 miles (distance from east Milwaukee to west Waukesha).

Opportunity landed on Mars on January 25, 2004. The original plan called for only 90 Martian days (sols), or 92 Earth days. The rover far exceeded that conservative estimate by lasting over 5,000 sols. A raging dust storm on the red planet finally caused its end in June 2018. NASA had hopes of re-booting Opportunity, but to no avail.

One of the biggest discoveries by Opportunity was the strange round rocks dubbed "blueberries" (below). Scientists are not certain of their exact origins but suggest they are evidence of past water on Mars.

Some of the tweets at NASA shared at Spirit and Oppy @MarsRovers are worth sharing:

“To all the poets, the painters, the makers and dreamers who've reached out to say #ThanksOppy and explore with us, thank you. We love sharing space with you.” 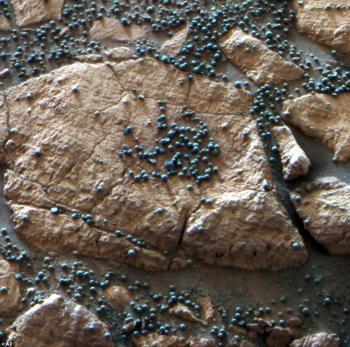 “#ThanksOppy for being the little rover that could! A planned 90-day mission to explore Mars turned into 15 years of ground-breaking discoveries and record-breaking achievements.”

The rover Curiosity will celebrate seven years on Mars this August. It’s already approaching a half-marathon, or 13.1 miles. Who knows, maybe someday it will break Oppy’s milestone. 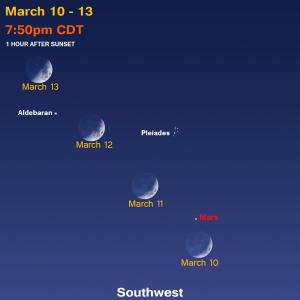 Mars stays in the same place pretty much all March. Look for the red “star” in the southwest after sunset. By March 31, the red planet sets about 11:30 p.m. The Moon wanders by from March 10-13. 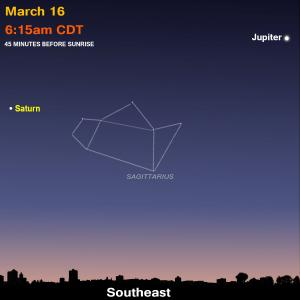 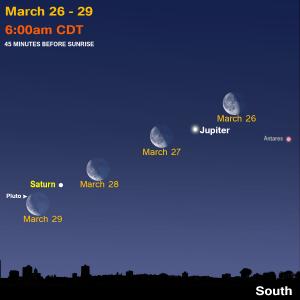 Jupiter  rises in the southeast about 2:30 a.m. local time at month’s start, and by 1:30 a.m. at month’s end. It still shines a considerable distance from it gas giant cousin Saturn. If your sky is far from city lights, you can look for the stars of Sagittarius. The Moon comes into view near the biggest planets from March 26-29. The Moon occults (eclipses) both Saturn and Pluto on March 29, but this is not visible from Wisconsin. Pluto is way too small and far away to see with the human eye, or even a fairly good telescope. 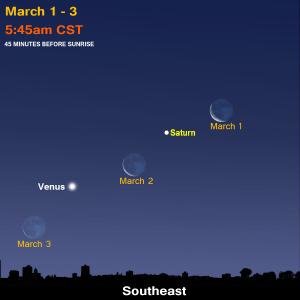 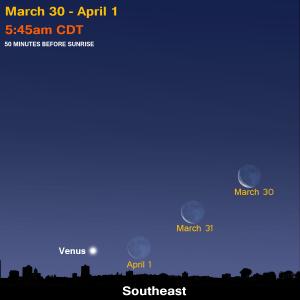 Venus  sinks even lower in March, but is so bright you can spot it very low in the southeast. The Moon passes Venus twice in March; catch it from March 1-3 and from March 30 to April 1.