"I do not find that anyone has doubted that there are four elements. The highest of these is supposed to be fire, and hence proceed the eyes of so many glittering stars."
- Pliny the Elder, Roman Scholar 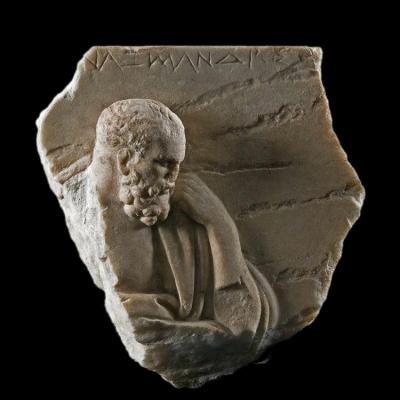 Imagine you have no idea how the sky works. You haven’t been taught the Earth is round, let alone that it spins and orbits. A science book never described how tiny atoms power the big Sun by nuclear fusion. No planetarium show helped you understand that stars are so incredibly far, they are measured in light years.

Now, look down at the Earth and then up at the sky. Try to make a model showing your planet and everything surrounding you.

This was the task of Anaximander, a Greek philosopher, astronomer, and cartographer who lived over 2,500 years ago. He is considered the world’s first scientist to experiment. He theorized clouds crashing together produced thunder and sometimes lightning. Consider the bold departure of this idea when everyone “knew” the mighty god Zeus threw bolts whenever and wherever he pleased.

Anaximander came from Miletus, on the east coast of the Aegean Sea in today’s western Turkey. Thales of Miletus, considered to be the first Greek philosopher, was his mentor. Anaximander was dedicated to figuring out causes and effects. You could think of him as the first inquisitive kid who kept asking his mom and dad “why.” He was the first one to see the sky in 3D and place the Earth floating in space, unsupported. This seems obvious to us today, but in Anaximander’s time the Earth was flat and the gods (Sun, Moon, planets) travelled across the sky from their distant shores, not underneath the Earth. 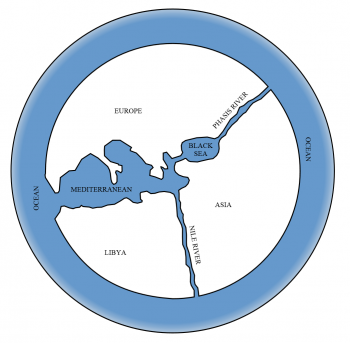 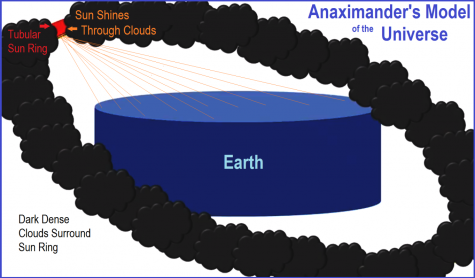 He mapped the Earth and gave it a shape like a drum. The Earth’s diameter length was three times its height. Before his writings, everyone saw the sky above as a big bowl over a flat Earth because, well, it makes sense! That’s how it looks and the first basic model of the universe. (This is also why a planetarium dome works so well!)

The Sun, Moon, wandering stars (planets), and fixed stars were seen as tubular rings. They shine through a hole in the dark clouds that engulfed the ring. These celestial loops were placed at different distances.  In his model of the universe, the stars were actually the closest—although all the same distance. He said the stars were nine times the radius of the cylindrical Earth. The Moon was 18 times that of the Earth’s radius and the Sun was 27! 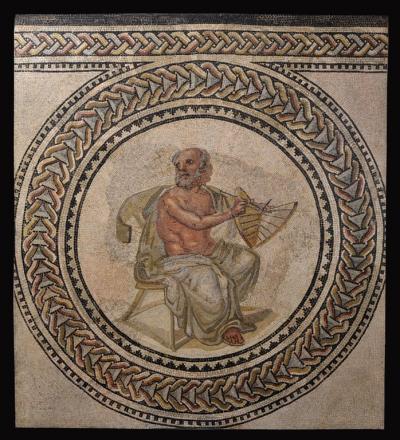 There is no record of the Earth’s size in his work; his map had only included the lands surrounding the Mediterranean and Black Seas. If we make an educated guess and say Anaximander thought the Earth’s radius was about 2,000 miles wide in radius (about half the size of actual Earth), then the stars were 18,000 miles away. Obviously, this is a small fraction from what we know now.

The Roman mosaic above shows Anaximander with a sundial. He was one of the first humans to use a gnomon, the sundial’s pole which measures the passing of time. The gnomon’s changing shadow position and length are due to the Sun’s changing path across the sky. This led Anaximander to measure the year’s length. Modern astronomer Carl Sagan praised his ingenuity: “For ages, men had used sticks to club and spear each other. Anaximander of Miletus used the stick to measure time.”

He is considered the “father of evolution” because he theories life changing over time. He also was the first to position the Earth as floating in space, not held up by anything. 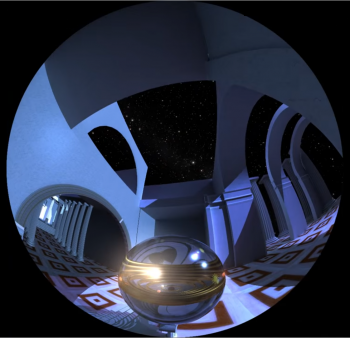 Around 200 years later, the Greeks developed various models of rotating spheres encircling the Earth. Nestled inside these celestial orbs were the Moon, Sun, planets, and stars.

By 150 AD, a famous Greek named Claudius Ptolemy wrote a complete work of the heavens called the Almagest. In his Earth-centered model, the glass sphere that held the fixed stars was at least 20,000 Earth radii. Since the correct size of the Earth was figured out by Eratosthenes of Cyrene at 4,000 miles in radius, this meant the stars were now 80 million miles away. The universe was growing, but still a far cry from the trillions upon trillions of miles we have calculated today.

Our 21st-century minds may think Anaximander’s ideas and calculations to be crude, but his thinking was revolutionary and brilliant. 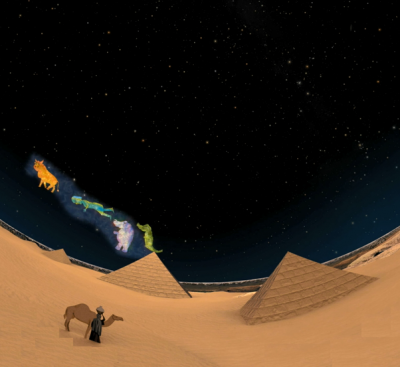 Recently, the MPM Planetarium staff finished a new program called Constellations: Adventures Connecting Earth and Sky. We were all set for its March premier, but then we closed due to the coronavirus.

A few topics in the program come from the rich history of Egyptian astronomy. One curious constellation they imagined came from the stars we call the Big Dipper. It included a bull, followed by a floating man, who was next to a hippopotamus that had a crocodile on its back.

You can see many Egyptian constellations at the magnificent temple of Hathor at Dendera. Stargazers across the Mediterranean Sea shared many constellations. Many Babylonian zodiac constellations were adopted by the Greeks and eventually found their way to Egypt. On this glorious ceiling of star drawings, one sees Taurus the bull, Pisces the fish, and Libra the scales to name a few. 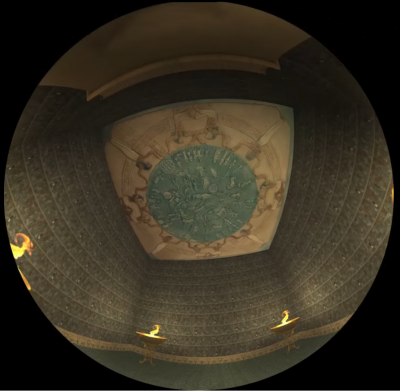 Though creating constellations is not science, their position and stories help cultures track time. Like the Sun by day, the nightly star patterns follow seasonal cycles every year.

One star in particular was a key to Egyptian life and the growth of their great civilization. It is the night sky’s brightest star—Sirius. When Sirius reappeared in the morning sky just before the Sun rose, sky watchers knew the Nile River would soon flood. This flood was welcomed because the water was used to grow their food by careful irrigation methods. Remember, most of Egypt is a desert; not much rain falls there. The Nile’s life-giving water was crucial for their survival. 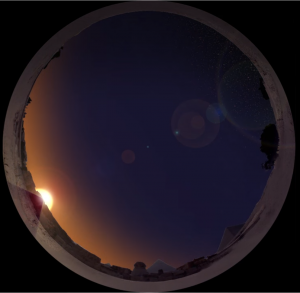 The powerful Sun was the god Ra to the peoples of Egypt. He was said to be born on the winter solstice. By worshipping and following Ra, they created a solar calendar of 12 months made up of 30 days—the predecessor of our modern 365-day calendar.

The ancient pyramids of Giza are astronomical in terms of their alignment in a north-south direction. Their stargazers long ago used stars of the Big and Little Dippers to map the correct position placements for the towering structures. Brick by brick, Egyptians build their pyramids as stairways to heaven -- literally. A tunnel rises from the interior of the pyramid where the opening faces the northern sky. This pathway allows the dead pharaoh to rise to heaven and join the imperishable ones, the stars that circle the North Celestial Pole. These stars near this pole never die — meaning they never rise or set — but always stay above the horizon. Today, we call these stars circumpolar. To the Egyptians, this part of the sky is where their leaders, the pharaohs, went to live in the sky as gods—or the imperishable ones. 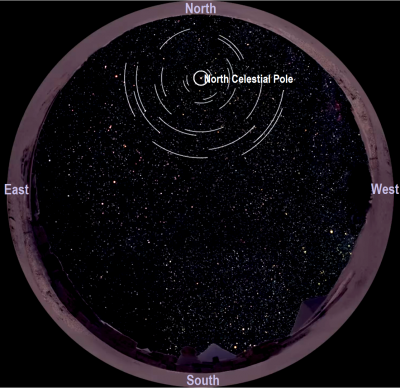 You can watch the Planetarium’s recent production Egyptian Astronomy, plus many other shows, online. 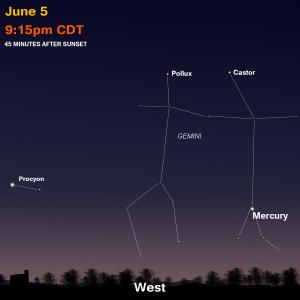 Mercury is still visible low in the western sky for the first part of June. Its brightness fades fast as it tries to compete with the long twilight of June. 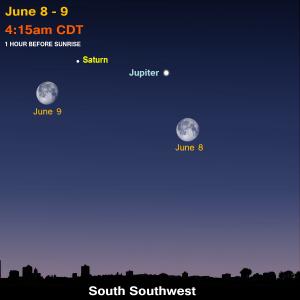 Jupiter and Saturn clear the eastern horizon very close to the same time all June. Jupiter rises at 11:30 p.m. on June 1 and just before 9:30 p.m. by month’s end. Saturn follows about 15 minutes later all month. The Moon passes the gas-giant planets on June 8 and 9. 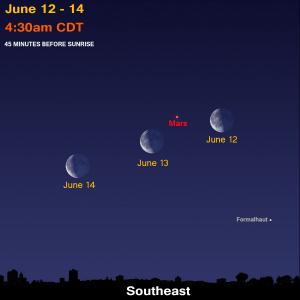 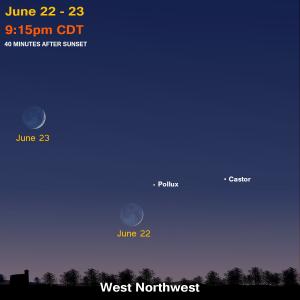 Mars rises just before 2:00 a.m. early in June and about 12:30 a.m. on June 30. Mars is growing brighter each night as it orbits closer to the Earth. At the end of June, it will outshine every summer-night star. The Moon passes the red planet on the mornings June 12-14. 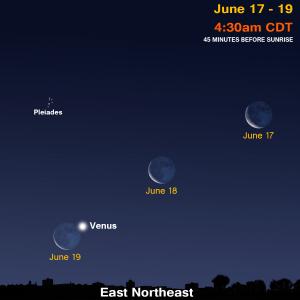 Venus orbits between the Earth and Sun—called inferior conjunction—on June 3 and can’t be seen. However, the planet’s fast orbit allows it to swing far enough from the Sun’s glare to be visible in the morning sky. Use the Moon to help guide your eyes on the mornings of June 17-19.