What are these species at the top of the food chain, and what is our relationship to them? Several can be found right here at MPM... and some even in your own backyard! Visit us in person or dive into our digital resources to learn more.

Claws, Teeth, & Talons: the World of the Apex Predator

We’re all familiar with the main apex (or top) predators -- the lions, tigers, and bears. But did you know that you may have an apex predator in your backyard? Can you pass the MPM “Pick the Predator” test, and are you brave enough to go forth into the wilderness of the Museum’s Third Floor on our “Hunt the Hunters” challenge? Join us as we celebrate these intriguing creatures, and explore how humans have long accepted our place in the world alongside the toughest animals around.

If you visit MPM this month, you may see our Get Curious signage on the Third Floor by Africa. There, we encourage our visitors to “get curious” about our relationship with apex predators.

The Maasai live in Kenya and northern Tanzania along the arid lands of the Great Rift Valley. They are pastoralists, meaning they center their livelihood around cattle and livestock. The Maasai have shared this land for hundreds of years with the wildlife, including lions. Lions are the apex predator of the East African grasslands. With no natural predators, they play an important role in their ecosystem.

In recent decades, droughts, a rise in the human population, decline in the lion population, new borders and restrictions on natural land, decrease in natural prey, and an increase of cattle attacks have changed the way the Maasai and lions interact. Due to the population decline, lions are now classified as a vulnerable species. In order to protect the lions and the ecosystem they live in, Maasai warriors have begun to protect lions and other wildlife in the land they share.

What might happen if lions were removed from the grassland food chain?

Lions are apex predators. They help keep the balance and biodiversity of their ecosystem. Losing lions could cause trophic cascade, a phenomenon where predators are either removed or reduced, having an indirect effect on the trophic levels below them. For example, lions hunt zebras, which are herbivores or primary consumers. Lions help keep the zebra population at a healthy number, which protects the grasslands that other animals need to survive. Without lions, the ecosystem would lose its apex predator, resulting in increased numbers of primary consumers, such as zebras, wildebeests, and antelopes. These herbivorous animals could then exhaust the plant resources, or producers, in the ecosystem. This could lead to soil erosion and habitat loss. The herbivores would be in competition for the remaining plant resources, and some species would be unable to get enough food to survive. This could have devastating effects on the biodiversity of this ecosystem.

What changes do you believe could be made to help the Maasai and lions coexist?

The Kenyan and Tanzanian governments have agreed to help offset the costs associated with the loss of cattle, which decreases the amount of retaliatory lion hunts by the Maasai. In 2007, the Lion Guardians, a group of Maasai and conservationists, formed with the goal of protecting lions. The Maasai are working on living in harmony with lions by changing their practices and traditions in the following ways:

Not a member yet? Get access and other perks when you join today! Your membership supports the Museum while giving you special benefits. Click here for details.

Exhibits like Hell Creek at MPM help us understand the differences between meat-eating and plant-eating dinosaurs. Download our activity to cut apart cards listing different dinosaur characteristics, then work with your early learner to sort each card by meat-eater or plant-eater. Use the final page to check your work and learn more about paleontology and dinosaurs! 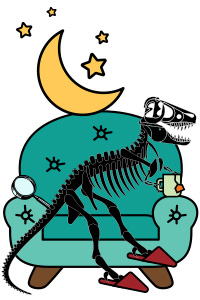 Stay home, put on your dino PJs, and join us for another great "night in" with MPM! During this interactive virtual event, learn shocking secrets meant for older audiences only, get tested on your knowledge about your favorite exhibits, and compete against friends from the comfort of home.

This is an adults-only virtual event.