Darting through the forest on an island in the Caribbean, a previously unidentified species of lizard forages for ants and termites in rotten wood and leaves. Thanks to the efforts of two scientists, this tiny, colorfully spotted lizard finally has a name -- but its future may not be as bright as its scales.

Bob Henderson, curator at the Milwaukee Public Museum, and Robert Powell, biologist at Avila University in Kansas City, MO,  officially named the new species of lizard Gonatodes daudini in the December  2005 issue of the Caribbean Journal of Science (CJS). Unfortunately, this newly discovered lizard might soon be listed as an endangered species.

Measuring less than two inches long, Gonatodes daudini, a gecko apparently active by day, makes its home on Union Island (with an area of 8.1 square kilometers), the southernmost of the St. Vincent Grenadine Islands in the West Indies.

Because of its small geographic range, habitat requirements, and the fact that Union Island continues to be developed for tourism, G. daudini is likely vulnerable to extinction. Searches for additional populations of the colorful lizard on other islands in the Grenadines are ongoing. 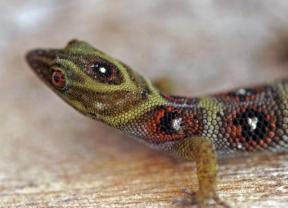 Catalog Number
N/A
67
Back to Top of Page