The Milwaukee Public Museum's Milwaukee Bucks Collection holds the franchise establishment papers for the Bucks. The NBA awarded the franchise in 1968 to Wesley Pavalon and Marvin Fishman. That first season, the team struggled to win games (as is typical with new teams in the NBA), but they became successful their second season when Lew Alcindor (later Kareem Adbul Jabbar) joined the team. In addition to the papers, the collection also features the first Milwaukee game ball the Bucks used in competition plus game balls from the Bucks' appearance at the National Championship game in 1971. 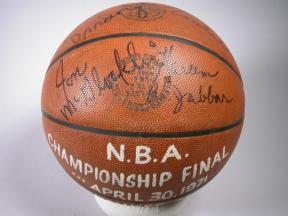