This replica of the Haida Chief Skidegate's house, as well as twenty-four other house models, was first exhibited at the 1893 Chicago World's Fair. The models serve as a snapshot of the 19th-century village of Skidegate on the Queen Charlotte Islands of British Columbia. As the original houses were far too large to transport, anthropologists commissioned Haida craftsmen to construct smaller and thus more mobile versions that would allow for the exhibition and study of the Haida aesthetic around the world. 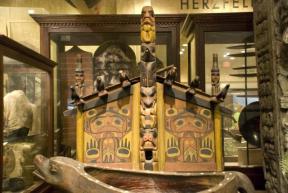