The Mexican Kickapoo reside on a reservation in the Santa Rosa Mountains of Coahuila. They originally inhabited land in northwest Ohio and southern Michigan, but were forced westward to northern Illinois and southern Wisconsin in the mid-1800s. They slowly spread westward into Kansas and south into Oklahoma, some reaching as far as northern Mexico. This collection comes from 1954 fieldwork conducted by Dr. Robert Ritzenthaler, Milwaukee Public Museum Curator of Anthropology, and from anthropologists Dolores and Felipe Latorre between 1960 and 1972. The Mexican Kickapoo are relatively isolated and reluctant to allow visits by outsiders. The collection, primarily consisting of clothing, basketry, and German silver jewelry and adornment is one of the largest collections of Mexican Kickapoo items in the United States. 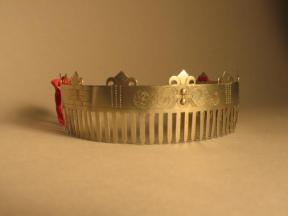