“O, Sunlight! The most precious gold to be found on Earth.”
- Roman Payne, English Author

What's Hotter Than the Sun? 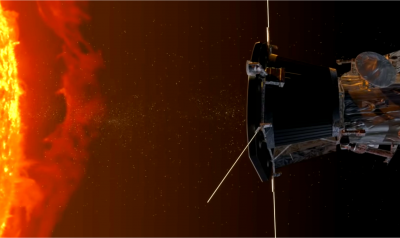 On April 4, 2019, NASA’s Parker Probe will travel closer to the Sun than any spacecraft prior. It will move to about 15 million miles from this stellar fusion furnace. Then, Parker swings back out in its orbit, picks up speed via a gravity assist from Venus, and then dives back toward the Sun.

On December 24, 2024, during its 22nd orbit, Parker will travel as close as 3.8 million miles from our star’s surface. That’s crazy close! Parker is expected to survive the blazing heat of the Sun; its science instruments are protected by a carbon-carbon shield that has been tested by engineers and scientists.

These close encounters with a ferociously hot star lead to the simple question: What’s hotter than the Sun? Let’s explore a few facts first.

Temperature is based on how fast atoms and subatomic particles vibrate and move around. The hotter they are, the faster they move. Conversely, colder objects move more slowly. Absolute zero, or -460°F, means atoms do not move at all. 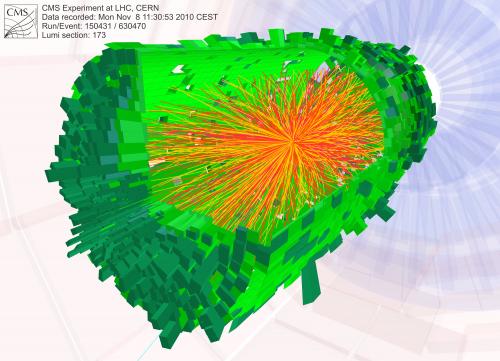 On Earth, the highest air temperature recorded was 134°F in Death Valley, California in 1913. We can make things hotter than that by simply turning on our oven. Create a campfire and the temperature soars to 2,000°F. Humans have created nuclear fusion reactors — the same process that powers the Sun — that have reached 180 million degrees Fahrenheit. That’s even hotter than the Sun’s core, which is 27 million degrees Fahrenheit; but our nuclear fusion feats are momentary. The Sun has been maintaining its blistering temperatures for 5 billion years, and will do so for another 5 billion.

The highest temperature ever occurred 13.8 billion years ago with the Big Bang start of the universe. At that very first instant of time, the temperature was 180 million trillion trillion degrees Fahrenheit. It’s been cooling ever since. 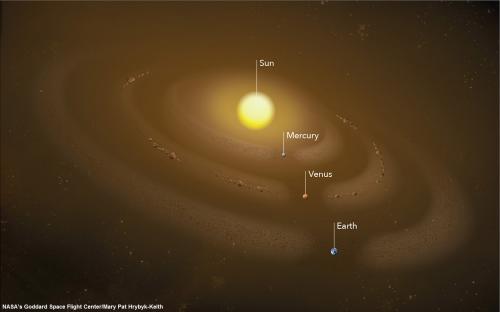 The orbit of the smallest planet Mercury is full of dust. The asteroid Bennu has dust coming off its surface. And remember, our very own planet Earth is being pelted by approximately 100 tons of tiny dust grains everyday! It seems dust is everywhere, not just on our shelves.

Dust in the solar system is mainly the left over debris that never fell into the Sun or helped make a planet or moon during its early days. There were countless collisions, too, creating more rubble and tiny grains of rock.

The likely culprit for Mercury’s newly discovered dust is the dust from the asteroids orbiting with Venus. Strangely, researchers located the duty haze while looking for evidence of empty regions to fly the Parker Solar Probe through as it encounters the Sun. Astronomers have known about a dust ring around Venus since 2013. However, the asteroids were still a surprise. It is not known how many asteroids are in the orbit of Venus or how large they are. 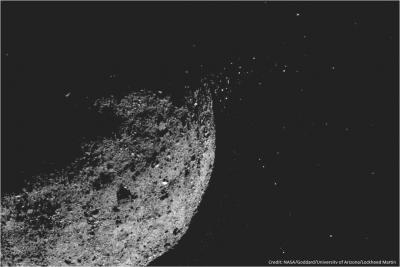 We think of asteroids as cold dead rocks, but with the discovery of briny salt deposits on the biggest asteroid Ceres and the newest discovery at the asteroid Bennu, our scenery is changing. Bennu is ejecting small particles from its surface. NASA’s OSIRIS-REx spotted this tiny wreckage on 11 separate occasions. It was a shocking find. The minuscule rocks are about an inch or two, or three, in size. Some have gone into orbit around Bennu so you could call them “mini moons.” Bennu orbits the Sun mainly between Earth and Mars.

Scientists theorize the tiny rocks are being ejected because Bennu has an icy layer below its top rocky layer. The Sun can turn the ice molecules into gas that could force the rocks off the surface. Ice on an asteroid may mean it was formed further from the Sun but somehow edged closer to the inner solar system. 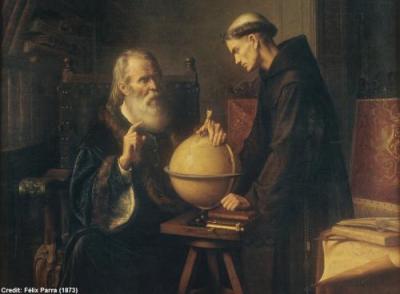 No one’s perfect. Many expert astronomers have been fooled by the universe, even the illustrious Galileo Galilei.

While Galileo’s scientific accomplishments are many and legendary, he was not right on everything. One of Galileo’s stubborn mistakes was not seeing the genius of another great astronomer, Johannes Kepler, who lived at the same time. Kepler sent Galileo a book on his discoveries on planetary motion. Kepler’s breakthrough was realizing planets travel in ellipses around the Sun, not circles.

To Galileo, the circle was sacred. The oval-shaped ellipse turned his stomach. However, Kepler’s laws proved correct. The planet positions could now be predicted with great accuracy. 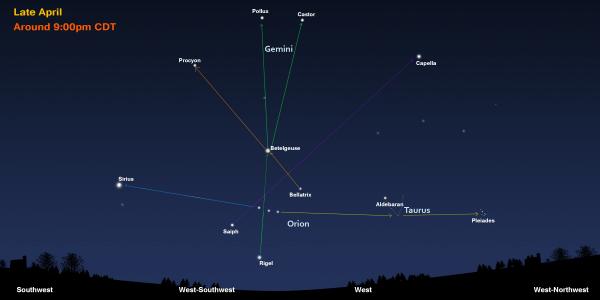 Find Orion and you can find a lot of stars! April is the last chance to see this brilliant constellation and to locate all the bright stars nearby. Use the color-coded star chart above to find Sirius, Procyon, Pollux, Castor, Capella, Aldebaran, and the Pleaides. 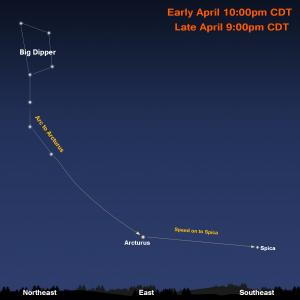 Early April is the time to see the Big Dipper high in the east and the return of the bright stars Arcturus and Spica. Simply follow the dipper’s handle to “arc” to yellow-orange Arcturus and the “speed on” to light blue Spica. 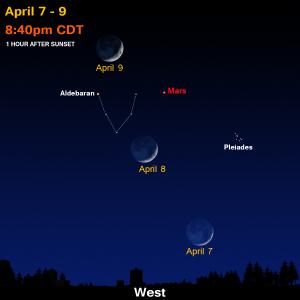 Mars still shines dimly in the west. The red planet starts to disappear around three hours after sunset. Compare the color of Mars with the nearby star Albebaran to the south. Both shine a reddish hue, but for different reasons. Mars is red because of the iron in its rocks. Aldebaran beams red because of its slightly cooler temperature. Observe the Moon close by from April 7-9. 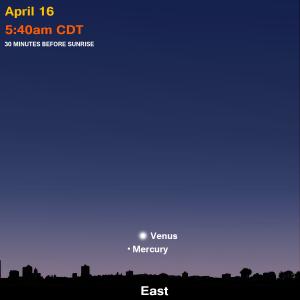 Venus still shines very low in the eastern sky before sunrise all month. A challenge will be to locate the planet Mercury nearby during the middle of April. Their closest approach will be the morning of April 16. 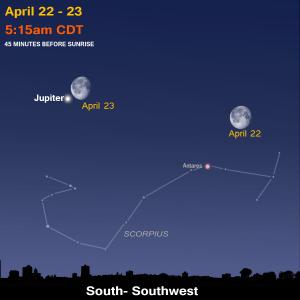 Jupiter shines in the south near the stars of Scorpius in the early morning sky. The Moon shines near the bright red star Antares on April 22 and close to Jupiter on April 23. The biggest planet rises by 11:00 p.m. at the end of April for any night-owl stargazers. 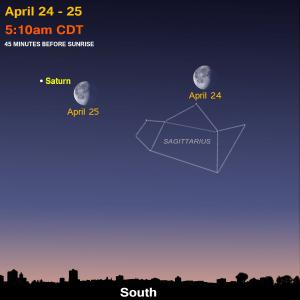 Saturn can be seen in pre-dawn south sky to the east (left) of Jupiter. If you have darker skies, you can try and spot the “teapot” of Sagittarius. The Moon orbits by on the mornings of April 24-25.