“O, sunlight! The most precious gold to be found on Earth.”
- Roman Payne, American born Novelist

Our sun is only one of billions of stars in the Milky Way galaxy. As stars go, it is a relatively small star. Over 1.5 billion suns could fit inside the behemoth Betelgeuse, a bright-red giant star in Orion.

Still, the sun dominates everything in our neighborhood. In fact, our star is responsible for 99.86% of the mass of the entire solar system! Jupiter comes in at 0.1%. The Earth’s mass tally is a paltry three-millionths (0.000003) of the sun’s mass -- and our planet weighs 13 billion trillion tons! Talk about a one-sided relationship; our Earth is a shrimp compared to our big-boss sun.

Okay, compared to us tiny humans, the Earth is huge! It is 8,000 miles across. Our planet is bigger than Venus, Mars, and Mercury. We are four times bigger than our moon! Earth’s gravity is almost like glue. To get our rockets into space, we have to accelerate them to five miles per second. That speed will get you into orbit. You have to go seven miles per second to completely escape Earth’s pull. 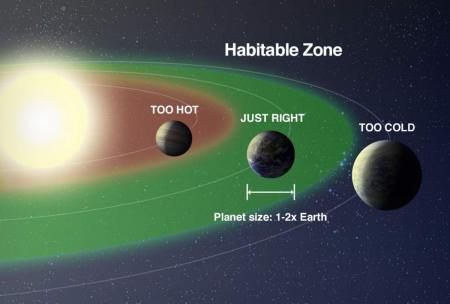 Obviously, we are positively dependent on the sun to survive. Its massive hot nuclear furnace provides us all the necessary light, heat, and energy! Without the sun, we’d be a cold ice ball orbiting… who knows? Jupiter?

And thank goodness we are the desirable distance from the sun. At 93 million miles away, the Earth is neither too hot nor too cold. Our orbit allows water to exist as a liquid, which is the key for life to flourish. Scientists call this sweet spot the habitable zone. Or, sometimes, if recalling their childhood, they refer to it as the Goldilocks zone.

Despite the sun’s dominance and overbearing presence, we’re attracted to it—physically. 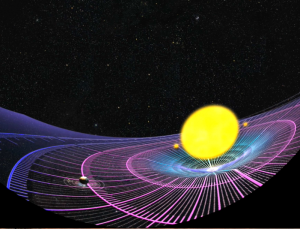 Einstein proved anything, anyone, that has mass, has gravity, and therefore will make a gravity well in spacetime. A human’s gravity well is pretty shallow. However, the spacetime warpage from massive objects is noticeable. Our Earth warps space and keeps the moon going around us. The sun’s colossal mass warps spacetime so much that all the other planets are trapped in its invisible gravity crater.

We can still race around the sun every 365.25 days because the Earth was born with some awesome speed! Our orbital velocity averages out at 18.6 miles per second.

Relationship-wise, the sun is a steady partner. The power we receive from our stellar behemoth doesn’t fluctuate much. Every second, the Sun converts 600 million tons of hydrogen to 596 tons of helium. The missing 4 million tons of energy is converted to radiation, or energy. This process is called nuclear fusion. The formula is Einstein’s famous E=mc2. 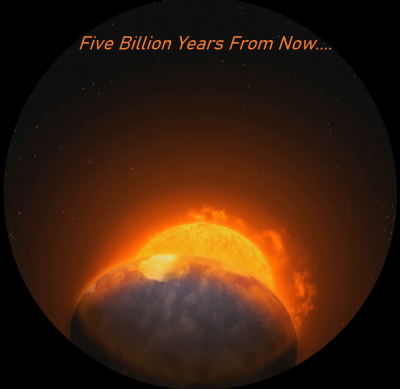 But the sun has only so much hydrogen. When it runs out of this nuclear fuel, our star begins to fuse helium atoms into carbon and oxygen. These conversions are even more powerful than the hydrogen-to-helium fusion. The sun will slowly expand over millions of years. It will swell into a red giant star, engulfing and incinerating Mercury, Venus, and (gulp) us, the Earth! No worries, though; this will not take place until 5 billion years from now.

By that time, anyway, hopefully, we will have switched stars. Maybe we’ll reside in a galaxy far, far away!

Obviously, all of us are a bit needy when it comes to the sun. The sun, on the other hand, sure could get along without the Earth. It may be a bit lopsided, our relationship with the sun. Maybe we can take a little extra time and appreciate the next gorgeous sunrise or sunset.

What Color Is the Sun?

It seems like an easy question. What’s your answer?
A. Yellow
B. Orange
C. White
D. Green
E. Black 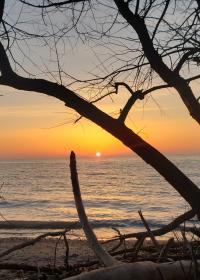 There’s a children’s book called The Day the Crayons Quit. Kids love it and laugh at the talking crayons. I especially enjoy the part when the yellow and orange crayons argue about the color of the sun. They each claim they are the sun’s true color.

Watch any dazzling sunrise or sunset. Notice all the exquisite shades of yellow and orange. Sometimes, you can even glimpse darker red colors. The yellows, oranges, and reds come from the air. On a clear day, the sky is blue because the blue part of the sun’s spectrum of colors is scattered best at shorter distances. This happens when the sun is higher in the sky. At sunset or sunrise the sun is low, just above the horizon. Now sunlight has to pass through a lot more air — up to 40 times more! More air means more molecules to scatter the blue light away. This leaves orange, yellow, and red light to reach our eyes.

Looking through all this air protects our eyes, too. This is why we can look directly at the sun during a sunset or sunrise. 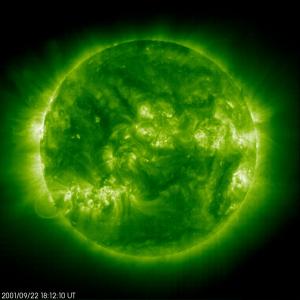 An astronomer might tell you the sun is actually green, but not like in the picture to the right. That green is a false color, or color-coded, image of the sun taken by NASA’s Solar Dynamics Observatory (SDO). It actually reveals part of the sun’s UV (ultraviolet) energy. SDO has different detectors that can image the sun at specific wavelengths, or temperatures. They use false colors to tell them apart—like the meteorologists who make light rain appear green and heavier rain red.

Scientists say the sun is green because its peak energy occurs in the green part of the visual light in the electromagnetic (EM) spectrum. (See graph below.) This is because the surface temperature of the sun is about 10,000°F, or 5,800 degree on the Kelvin scale.

Our sun radiates energy across the entire EM spectrum. Notice in the graph that the sun produces plenty of radiation in the UV and infrared part of the EM spectrum. It peaks green because of its temperature. Other stars have different colors. Hotter stars shine more blue while less-hot stars glow red. 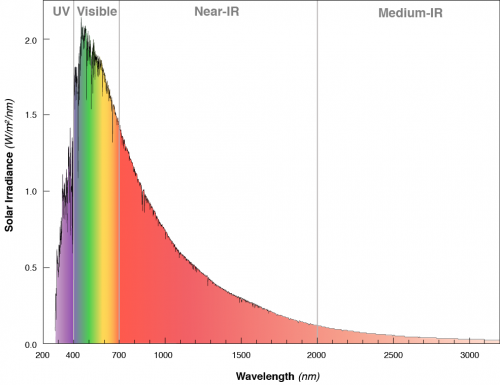 Stars are sort of like fires. All stars are hot. All fires are hot. But look carefully at a candle flame: You will notice a soft blue glow next to the wick. That is the hottest part of the fire.

The sun is also defined as a nearly perfect blackbody. Alright, you say — what’s going on here? A blackbody gets its name because it doesn’t reflect light or let any light pass through it. In other words, a blackbody absorbs all of the light that falls on it so it appears colorless, or black.

The sun is very good at absorbing any light that comes its way. Other objects do not, like glass or metal. A glass window lets light go right through, absorbing hardly anything at all. A shiny metal surface reflects most of the light shining on it—again, absorbing very little.

The expression “blackbody” is a bit of a misnomer since the sun is extremely bright and obviously not black. The name just means the sun’s blackbody radiation is NOT reflecting electromagnetic radiation. The sun produces an enormous amount of its own radiation and light by nuclear fusion, as we saw in the first article. 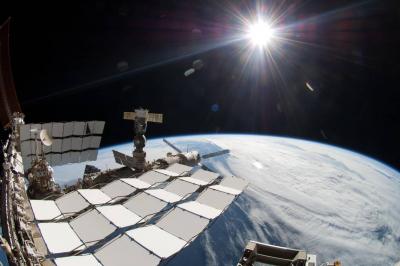 So, what is the true color of the sun? Go back to that sunrise picture up above. Amongst all the yellow and orange atmospheric hues, notice the sun itself is actually white! Our eyes process all the sun's colors together, not just the peak energy at the green color. All this mixing makes the sun shine white. This is especially evident when we see pictures of the sun taken from space by the astronauts.

I think the orange and yellow crayons would think a white sun is sort of boring. But our sun is ultimately responsible for all the wonderful colors that our eyes behold. 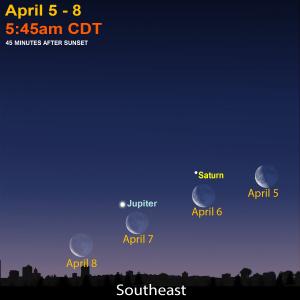 Jupiter and Saturn are a bit higher in the morning, but you need to get up early. Look southeast about 45 minutes to one hour before sunrise. The Moon sweeps by from April 5-8. 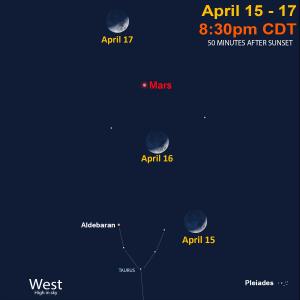 Mars dims even more for the month of May as its distance from Earth keeps increasing. On April 24, it crosses an imaginary border as it leaves Taurus and enters Gemini. Look for the Moon near the red planets from April 15-17. 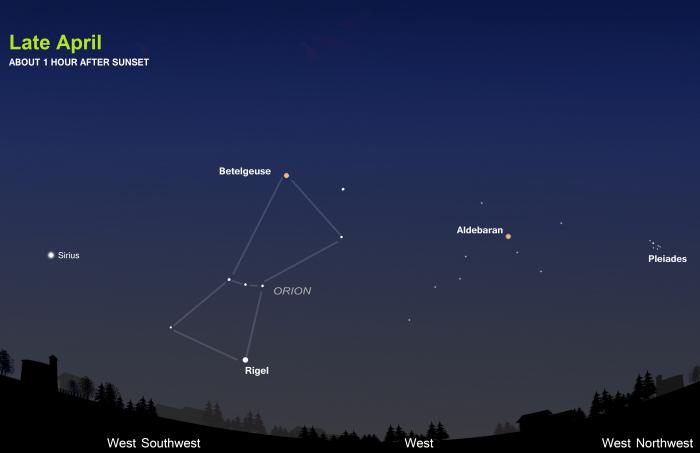 Catch Orion while you can! By late April and early May, this bright constellation gets very difficult to see. By mid-May, Orion lines up pretty much behind the sun. We will not see him again until early August in the morning sky.

Due to the Earth’s orbit around the sun, stars rise and set four minutes later each night. So from one night to the next, you might not notice a difference. But after just one week, if you look at the stars at the same time, their change in position is more obvious. 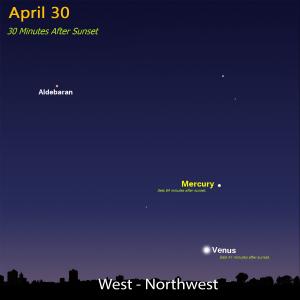 Venus returns to the evening sky late this month. It will be difficult to see as it shines very low in the WNW sky. Less-brilliant Mercury might be easier as it’s higher in a slightly darker sky. Binoculars will help.