“Thunderstorms are as much our friends as the sunshine.”
- Criss Jami, Contemporary American Author 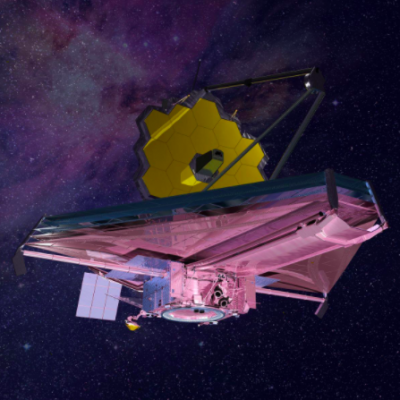 The James Webb Space Telescope (JWST) will hopefully launch in March of 2021. It will stand on the shoulders of the successful Hubble Space telescope which is still going strong after 30 years — though its end is near.

The Webb Telescope has taken 20 years to make. It arguably will be the best and most powerful telescope ever conceived and constructed. Its 25-foot golden mirror will collect distant light to make astounding discoveries on the origins of galaxies, stars, and planets. The story of the universe will be more complete. Its pictures will be in better focus.

We have spent 10 billion dollars on the JWST so far. Leading some to ask questions such as, is it sensible to study the stars? Should we launch humans into space? If we do these things, how much do we spend? 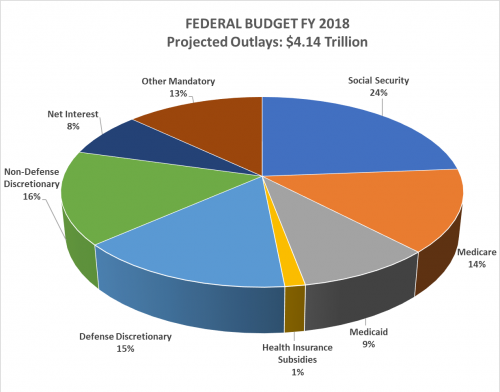 These are never-ending questions. Opinions and judgments are expressed and challenged year after year. A common question I hear once in awhile is, why spend billions of dollars to go into space when we have all these problems down here on Earth?

To me, that’s sort of like asking, should we stop exploring? Yes, we do have many serious issues here on Earth, but like most things in life, it’s a question of balance.

NASA's 2020 budget passed by Congress was $22.6 billion dollars. That sounds like a lot of money, and it is! But wait; let’s compare this space-money to the entire federal budget of almost $4.8 trillion dollars. 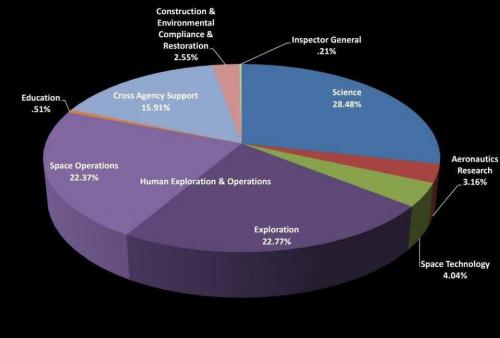 After some quick math, it turns out NASA’s budget is less than a half-percent of federal budget. In other words, for every dollar you pay in federal taxes, less than a half a penny goes to NASA.

Roughly speaking, about half of NASA’s budget is spent on getting humans into space. This includes the trips to the International Space Station (ISS) and technology research toward the next generation of rockets us back to the Moon and Mars. The other half of the budget is for scientific research of the Earth, planets, and deep space. These endeavors often overlap. For example, the pure science research of the Hubble Space Telescope also took the efforts of the space shuttle that launched humans into low Earth orbit. 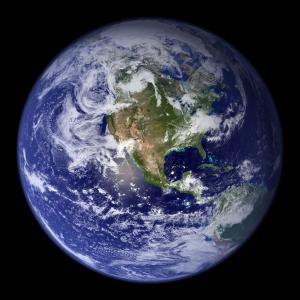 Moving forward, it is imperative to remember that Earth is part of space. Looking at our planet from orbits high above is the best way to predict weather, study our land and oceans, and understand climate change. Finally, seeing our exquisitely beautiful blue marble from space inspires us to take care of our world and each other.

Here we go again, off to the red planet. NASA's Mars 2020 Perseverance rover is targeted for launch on Monday, July 20 aboard an Atlas rocket in Florida.

Before we started hurling spaceships off planet Earth, 19th-century American writer and poet Ralph Waldo Emerson said, “It's not the destination, it's the journey.” That may be a bit cliché, but personally, I have to remember that when my cosmic impatience catches up with me and I mutter, “Okay, another Mars mission, why is this one important? When will astronauts get there?”

Since the space age started some 60 years ago, it’s amazing to comprehend the number of journeys to Mars. The answer is 56—that’s almost one per year--with only 26 being considered successful. There were many failures early on in the 1960s. We have a much better batting average as of late.

Before rockets, humans took thousands of journeys to the red planet. Of course, only human imagination made these travels possible! While most people probably dreamt of going to the Moon, Mars surely beckoned as a heavenly destination for many sky watchers. 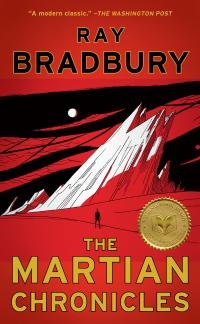 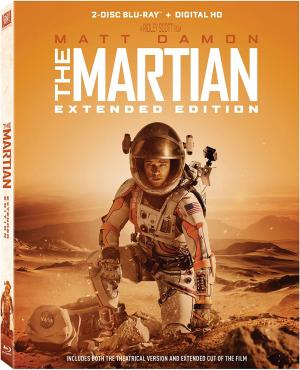 Fantastic voyages to Mars are still created by today’s writers and movie-makers. They not only take us to Mars, but to the edges of the universe! These trips can often blend artful stories of the future and the wonders of today’s science. While they sometimes teach us space facts and what’s possible, these science-fiction tales explore us humans a lot more. We read and watch these great adventures, amazed at all the inventive journeys we can fathom.

NASA’s impending journey in a few weeks has a helicopter on board. Called Ingenuity, a drone might be a better description. It will attempt to fly in the extremely thin Martian carbon-dioxide air to navigate best pathways for NASA’s fifth rover on the red planet. 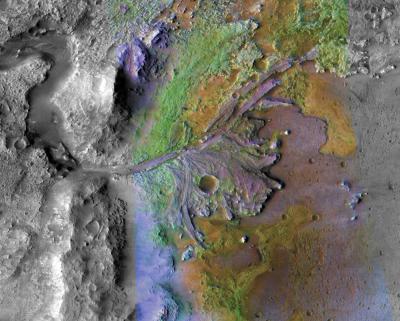 Plans are for Perseverance to land over in the Jezero Crater delta. Pictures from orbit reveal water carved channels and transported sediments. This month’s launch of the Perseverance rover is a good reminder of the distances of space. The spacecraft will not reach Mars until February 2021. The mission will focus on astrobiology, climate, and geology.

Though Perseverance will not be able to detect life, it will search for evidence of past microbial life by analyzing rocks and soil. This rover will also set aside some of these rocks for a possible future mission to “fetch” them up and return the rocks to Earth. This could happen within 10 years. 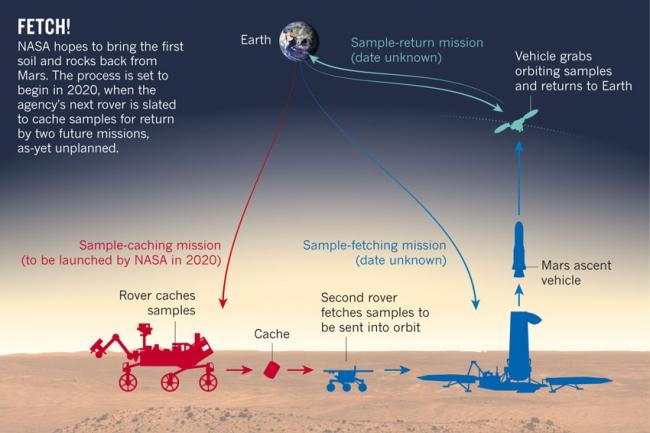 Within 20 years, astronauts may walk on Mars. And maybe within that time frame, we will have a more definitive answer about whether or not life ever started on the red planet.

Get psyched for another Mars mission and enjoy the never-ending journey! 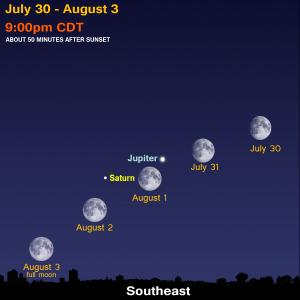 From July 3-6, observe the Moon orbiting by Jupiter and then Saturn. Watch the Moon slide by again at the end of July and early August. These two distant worlds rise just after sunset at the start of July—around 9:30 p.m. CDT in SE Wisconsin. Thirty nights later, they rise by 7:30 p.m. CDT—before sunset. Look for these two largest planets low in the SE sky. Jupiter is at opposition (opposite the Sun) on July 13. Saturn does the same on July 20.

Since most skies will be absent of fireworks this July 4, see if you can spot the penumbral lunar eclipse. It won’t be easy, as only a slight darkening occurs. The Moon is moving through the Earth’s lighter penumbra shadow. Stay tuned, though; the Moon will pass through the Earth’s darker umbra shadow twice in 2021! 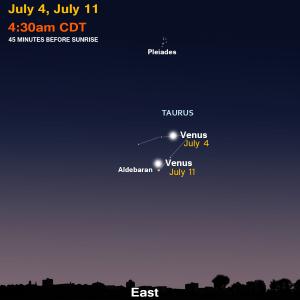 Venus is back and brilliant before sunrise in the eastern sky. See if you can watch the hottest planet edge up to the bright red star Aldebaran in Taurus the bull. 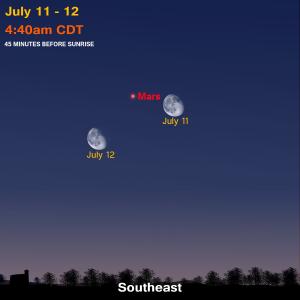 Mars rises just after 11:00 p.m. CDT at the end of July. Watch the red planet shine a brighter red as it nears the Earth. The fourth rock from the sun reaches opposition on October 13 when it will be around all night and shining at its brightest. The Moon passes the red planet on the mornings July 11-12. 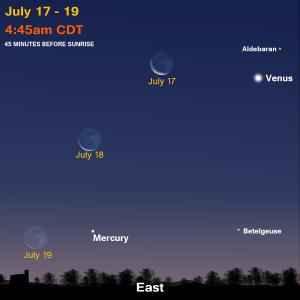 Mercury and the Moon join Venus from July 17-19. You still need to rise early even though sunsets are getting later. On July 19, the sunrise is at 5:30 a.m. CDT in Milwaukee, WI.