“Time comes into it. Say it. Say it.
The universe is made of stories, not of atoms.”
- Muriel Rukeyser, American Poet

Stories of the Aurora 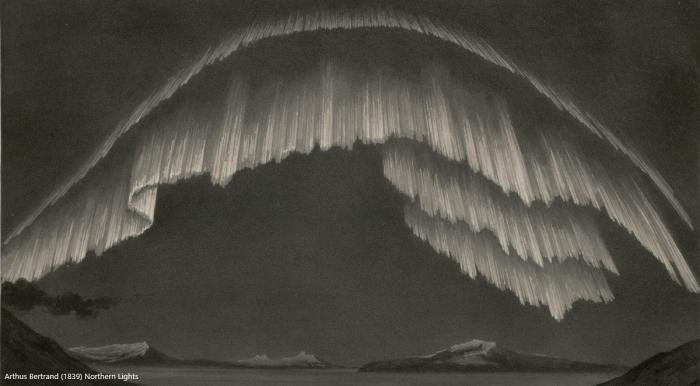 The majestic aurora captures the human imagination. Artists and storytellers have been inspired by their colorful dancing lights. Scientific minds are propelled to explain their cause and to predict their next appearance. Aurora stories are both spiritual and scientific, and they started long ago. 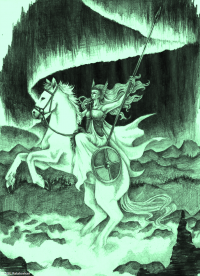 Similar to other celestial sights long ago, which were rare and unpredictable, auroras were seen mostly as dire messages from above. The first written description came from China almost 5,000 years ago. They were described as a very large lightning display that was moving around a star. Inuit people across the Arctic saw them in various ways: One group saw them as a cosmic game (recently passed spirits playing with a walrus skull); another said they were the spirit-lights of children who had died very young. The Norse sky-watchers saw them as weaponry from the Valkyries as they led the fallen soldiers to Valhalla, or heaven. These female warriors chose who would die in battle and who would live.

A theme of fire surrounds various explanations for the aurora. The Ngarrindjeri people of south Australia refer to the lights as “campfires of the dead.” A Chinese legend views the mystical lights as a sky battle between both good and evil dragons who breathe their fire across the sky. Finnish stargazers tell a tale how an arctic fox causes the aurora. The fox runs very quickly and strikes the snow with its tail, causing a fire which vaults into the heavens. Their aurora name is revontulet which means “fox-fire.” 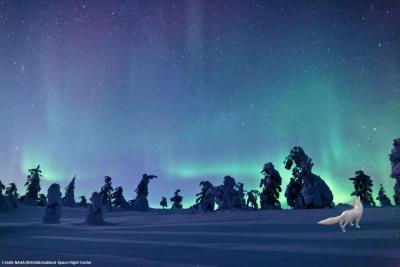 Like eclipses, a specific aurora sighting could be seen as a warning or sign. One aurora was thought to have predicted the death of Julius Caesar in 44 BCE. Another in 1860 was said to be a sign for the start of America’s Civil War.

We can thank Mr. Galileo Galilei for the name of these wondrous lights. Galileo had mistaken an aurora he witnessed as air being reflected by approaching sunlight. So he called it “aurora,” the Roman name for the Goddess of the Dawn. Aurora would ride her chariot across the sky announcing that Sol, the god of the Sun, would soon follow. Like most of their celestial stories, the Romans borrowed this from the Greeks where the Dawn Goddess was Eos and the Sun God was Helios.

Over 2,000 years ago in Greece, Aristotle deduced the aurora was caused by water vapor rising into the sky above. Once high enough, these elements collided with the fire elements and then burst into the flaming aurora light. Aristotle’s explanation was not correct, but he was on the right path.

Just over 200 years ago, America’s Benjamin Franklin reasoned the aurora was electricity in the atmosphere. He often saw the aurora traveling back and forth to Europe. His explanation was the heavy snow and moisture farther north concentrated the electrical charges in the upper air. His ideas were even closer to the right answer. 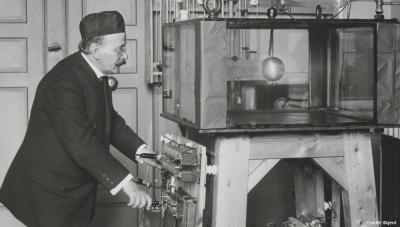 Norwegian scientist Kristian Birkeland finally figured out the precise workings of the aurora. In the early 20th century, after many travels both north and south, his lifelong quest was successful. Many scientists of Birkeland’s day disputed his theories. Their scorn and his overly compulsive quest led to much tragedy in his life. Eventually, though, Birkeland's science was confirmed as the answer to the aurora. Birkeland’s research pointed to electric currents flowing along Earth’s magnetic field lines. When they intersect with the Earth’s air, they collide and produce the auroral lights. These magnetic lines converge at the poles. This is why people near the north and south poles see the aurora more often.

Together, the sun and Earth provide the electrical discharge to make the aurora light. The sun is constantly producing subatomic particles (electrons and protons) that race out in all directions. This is called the solar wind. When it interacts with our magnetic field, electricity starts. When the electron flow collides with our air molecules, we see magnificent auroras. 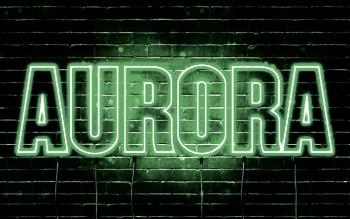 A huge solar storm in 1859, called the Carrington Event, had already linked the aurora with the sun. It is the largest geomagnetic storm ever recorded. This sun-blast produced amazing aurora over much of the planet. It disrupted and ruined many telegraph systems.

Neon signs, or fluorescent lamps, work much like the aurora. As electricity flows into the tube or bulb, they move electrons from the atoms to higher levels. When the electrons move back to lower levels, they emit photons, or light! 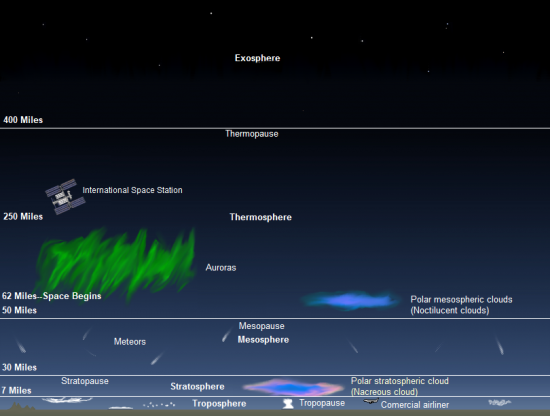 The aurora occurs very high in the sky, around 60 miles up. This is where space begins, but there is still air; it’s just very, very thin—way less than 1% of air density at the surface. Even at 250 miles up, where the International Space Station (ISS) orbits, there are still some air molecules. There is enough air that high for the station to periodically fire engines to maintain its orbit.

The color of the electric aurora displays are determined by four key components:

Green is most common. It occurs when the sun’s charged particles collide with oxygen atoms at lower heights, from about 60-100 miles up. Once in a great while, a pinkish fringe can be seen, which is caused by nitrogen molecules.

Higher in the sky—from about 100 to 400 miles—the aurora can glow a stunning red color. Yes, this is considered space, but there are still air molecules—albeit incredibly thin. Here, it takes more energy from the sun, and more time, but if conditions hold, a red aurora glow can be seen. The ISS has taken many gorgeous aurora photos from space. Astronauts on board have even flown through the aurora!

These are only a few small samplings of the multitude of aurora explanations and artistic interpretations. It is estimated that less than 5% of the world’s population has ever seen the aurora borealis (north) or australis (south). If you have never seen it, I hope you can add your story sometime soon.

One by one, stars are slipping away. Cities are getting bigger. Light pollution is growing.

According to the International Dark-Sky Association (IDA), “Eighty percent of the world’s population lives under skyglow. In the United States and Europe, 99 percent of the public can’t experience a natural night!”

To witness this magic of night, the vast majority of us have to drive many miles away from our city lights.

Even if you venture 50 miles from downtown Milwaukee, it’s very difficult to see the ghostly veil of the Milky Way arcing high overhead. Meteors—those fleeting “shooting stars”—are getting harder and harder to see. 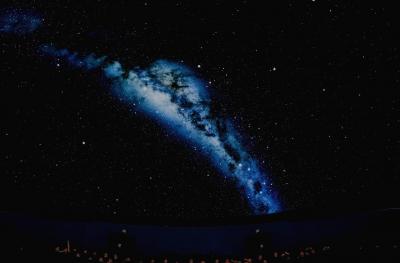 Unfortunately, too much of this light is pointed upward (light pollution) or to the sides (light glare), where energy and money is simply wasted. Thanks to the IDA, and many others, efforts have been made across the globe to secure proper and efficient lighting. This is often seen as a win-win situation. Money is saved as night lights are directed down to where they need to shine. Consequently, more stars can be seen in the sky. In addition, our need for light at night also affects nature, our safety, and our health.

A sad realization about losing our dark skies is that many children will never experience a starry, starry night. We notice that here at the Planetarium. Young students will gasp, shriek, and sometimes even clap as the Planetarium transports them from a city night with a few dozen stars to a country-dark sky where they can see more than a thousand stars!

The Planetarium sky is nice of course, but it doesn’t hold a candle to the glory and splendor of the real sky full of stars. 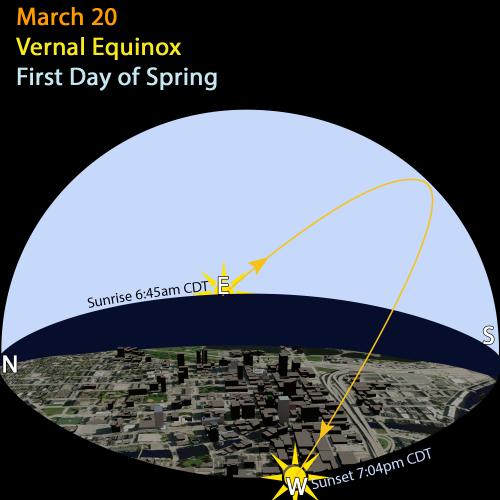 If I only have time for a short elevator speech on the equinox, I simply say, “It’s when we have equal day and night—12 hours each.” If the door hasn’t opened yet, I’ll add, “It’s when the sun’s position is directly over the Earth’s equator.”

Every once in a while, an inquisitive person will ask, “I noticed the sunrise and sunset time for the equinox, and it’s a little longer than 12 hours.” For example, this year they might get specific and notice that on March 20, we have 12 hours and 10 minutes of daylight.

Then the explanation gets a little longer and we step aside for a talk. If you eavesdrop, you might hear me say something like, “Equinox is Latin for equal night. Equilux means equal light. Equilux day—when we truly have 12 hours each of light and dark—takes place a few days before the vernal equinox and a few days after the autumnal equinox. This year, the equilux day closest to 12 hours each is March 17. Why the difference? The first reason is that the sun is not a tiny point in the sky; it’s 864,000 miles across. When it rises and sets on the equinox, we don’t mark its time on the sun’s center, but when we first and last see its disk. This adds a few minutes of daylight.”

“The second reason is the bending of light by all our air molecules. We call this atmospheric refraction. The air distorts the sun’s position, causing it to appear 0.5 degrees higher in the sky. This will add a few more minutes to the amount of daylight. This bending of light is the same reason why stars twinkle.” 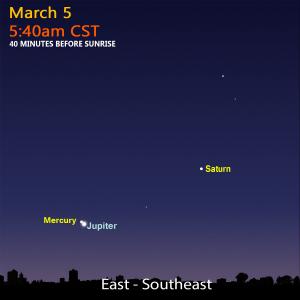 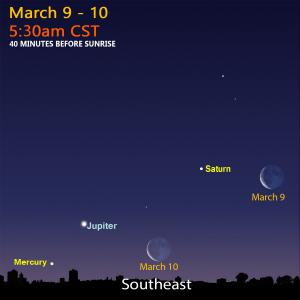 Jupiter, Saturn, and Mercury are all visible in the morning sky, but they will be difficult to spot right away. The Moon will help guide your way on the mornings of March 9 and 10. The biggest and smallest planets have a very close conjunction on March 5, but they shine very low and you will be battling the brightening dawn sky. 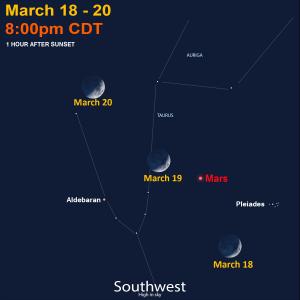 Mars dims quite a bit this March. It was shining as brightly as the brightest stars at the start of 2021. By March 31, its magnitude is down to 1.3. Still easy to see among the city lights, but the red planet is now only a little brighter than Orion’s belt stars. Look for the Moon passing by from March 18-20. 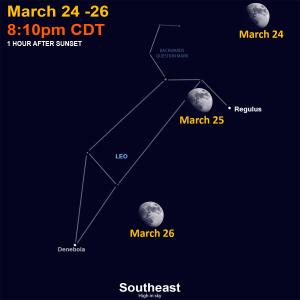 Leo is a great marker of spring’s return in the night sky. This fairly bright constellation can be easily seen in the southeast sky after sunset. A waxing gibbous Moon wanders by from March 24-26.

You may have heard of the expression “comes in like a lion, goes out like a lamb.” This description of the beginning of spring might be a connection to the stars. In early March, Leo the Lion rises in the east after sunset. By the month’s end, Aries the Ram sets in the west just after the sun sets.

Venus is not visible this month. On March 26, the hottest planet is at superior conjunction behind the sun. We should start to see the brilliance of Venus in late April in the evening sky.