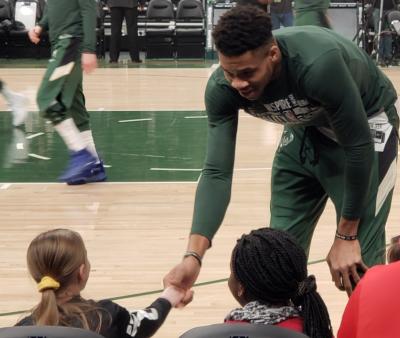 We can only jump so high. Even professional basketball player and recent two-time MVP Giannis Antetokounmpo can only soar so high before Earth’s gravity brings him back down.

Our planet’s warping of space-time is so deep; we have to build rockets that can go seven miles per second to escape it. We have done this many times, of course, but it takes many dedicated scientists and engineers—and tons and tons of rocket fuel!

So why then won’t the water droplets fall from the fingers pictured here? 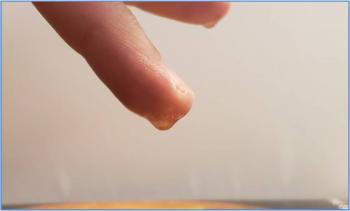 e answer is electromagnetism—the force between subatomic particles, namely negative electrons and positive protons—that holds us humans and all our stuff together. These electromagnetic bonds in the water overpower Earth’s tremendous gravity. This same force keeps those magnets on your fridge, too.

Electromagnetism is one the four fundamental forces of nature. Besides gravity, the other two are the strong and weak nuclear forces. The strong nuclear force is the most powerful in the universe. Gravity is the weakest. 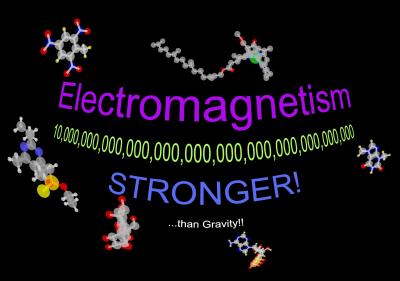 In atoms, electrons keep their distance when attracted by the protons—a phenomenally huge distance compared to their sizes. If one carbon-12 atom was the size of a baseball stadium, its six protons and six neutrons would be tiny baseballs on the pitcher’s mound. The corresponding six tinier electrons would be located at the outer edge of the stadium. The rest of the place is completely empty; that’s an atom.

It is extremely difficult to fathom the smallness of an atom. We think maybe we can just grab a microscope and voila, there are the atoms! Nope; like many things in science, we know all these facts about atoms because of their cumulative effects, which we can measure. 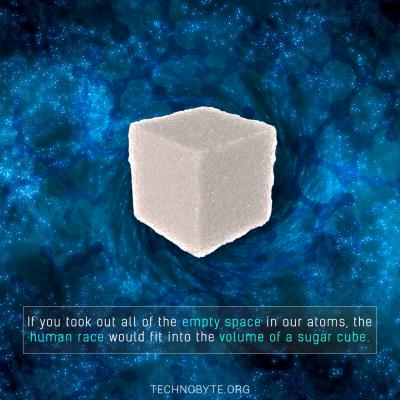 While gravity keeps us grounded, it's the invisible forces which keep our bodies together. An average adult is made up of around 7,000,000,000,000,000,000,000,000,000 (seven octillion) atoms. If you removed all empty space in your atoms, all your protons, neutrons, and electrons would still be invisible. They would fit a tiny square box, about 1/1,000th of a centimeter on each side. If you took empty space out of everybody on Earth (all 7.8 billion of us), our atoms become the size of a sugar cube.

Another strange thing about the atoms that make up you and me is that they never touch one another. The closer they get, the more unlike charges repel (like trying to bring two intensely powerful magnets together). This force is so strange that when we sit in a chair, we don't actually touch it; we float an undetectable, minute distance above it, suspended by the repulsion between atoms.

Our eyes and everyday experiences usually do not let us visualize these strong forces (beyond the fridge magnet). Yet, we live the electromagnetism with all our technologies—from computers to garage door openers. Gravity gets the last laugh, though, over these stronger invisible forces. On astronomical scales, gravity dominates! It has the longest range. The strong and weak nuclear forces fade away once you leave the atom. The electromagnetic force between two objects lessens by a larger factor than gravity does. 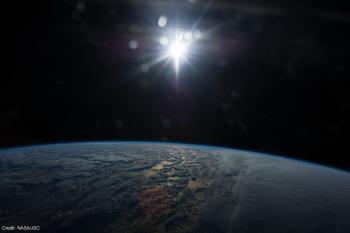 This is why the Earth goes around the sun — due to gravity!

Earth: Flat or Round?

We made a Planetarium program about four years ago called Sky Wars. It was about various conflicts that arise when we assess what’s really going on with Earth and the universe. Some of these cosmic arguments and mysterious questions we covered were: Astronomy vs. Astrology; Is the Earth the Center of the Universe?; Does ET Exist?; Does the Earth Really Move?; and of course, Is the Earth Flat?

We have all heard many people still believe the Earth is flat, even today! It makes headlines, especially if a famous person says the Earth is not round.

According to YouGov, a British international Internet market research firm, after surveying more than 8,000 people, around two percent of Americans believe the Earth is flat. Other surveys show that 25% think the sun orbits the Earth and 30% believe in astrology workings. So comparatively, “flat-earthers” are fairly rare.

It’s hard to prove astronomical truths in quick fashion. Proving the Earth is round, though, has been done since the ancient Greeks. Aristotle figured out our sphere shape by just observing the shadow of the Earth on the Moon during lunar eclipses. 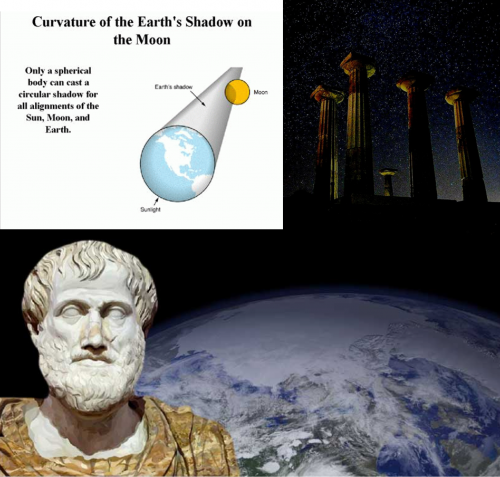 For centuries, people recognized that the Earth is round by simply watching a ship sail out to sea. The ship never disappears suddenly—like it fell off the edge of a flat Earth. What they saw was the hull of the ship disappearing first. Next, they slowly lost sight of the sail. Then, finally, the top of the mast vanishes. This can only happen on a round Earth.

We decided to prove the Earth is round right here in Milwaukee. We set up two video cameras to watch a sunrise. One was atop the tallest building here in Wisconsin—the US Bank Center at 41 stories high, or 181 meters. The other video camera was on the ground near the big building—about six meters above Lake Michigan.

Guess who saw the sunrise first?

The camera atop the tower saw the sunrise first at 6:16 a.m. on September 1. Why? Because of the Earth’s curvature. The sunrise on the ground came two minutes and 18 seconds later! If the Earth was flat, the Sun would rise at the same time in both places. Watch our little video here:

For more than 60 years, orbiting satellites in space and direct observations from the 560 astronauts who have flown in space give us the most direct evidence of our planet’s roundness. The high resolution images of our entire Earth remind us both of its beauty and fragility. It’s hard to believe how someone seeing these exquisite images would think it could be all part of a big conspiracy! (If they do even think about it at all…)

Starry squabbles will always be around. The universe is too vast and too unknown for them not to. 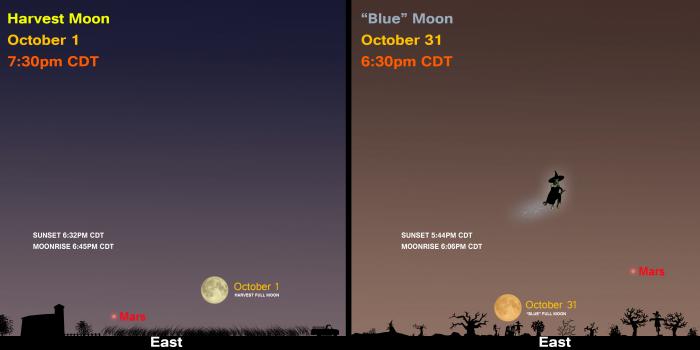 We have two full moons this October. A harvest moon starts the month (the full moon nearest the first day of fall) and the “blue” moon ends it on Halloween night.

Have you ever heard the phrase, “Once every 2.7 years”? Guessing your answer is no. Well, that would equal the expression, “Once in a blue moon.” “Blue moon” is the name given to the second full moon in a calendar month. The time between full moons is 29.53 days. The last time we had a blue moon on Halloween was 2001. The next one will be in 2039. Blue moons are not named for their hue. The ash and smoke from volcanic eruptions and forest fires might give the moon a bluish tint, but that is even rarer than a regular “blue” moon. The next one occurs on August 31, 2023.

During this equinox and harvest time, the Earth’s tilt causes the ecliptic (path of sun and moon through the sky) to make a shallow angle with respect to the evening horizon. Thus, the moon rises about 30 minutes later each night—twice as quick as it normally does. More moonlight makes it easier to bring in the crops! 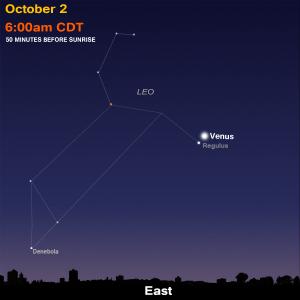 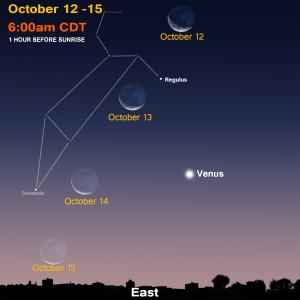 Venus still amazes human eyes in the morning sky. Look for it orbiting in front of the stars of Leo the Lion. Also, notice how the bright planet moves away from Leo’s brightest star Regulus to the dimmer star Denebola. The Moon joins Venus from October 12-15. 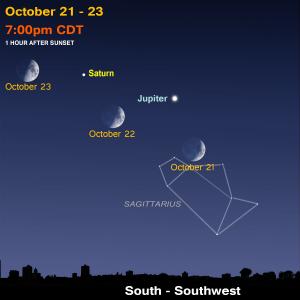 Jupiter and Saturn are getting closer and closer this October—though, of course, they are really about 400 million miles from each other! Again, don’t forget—on the first night of winter, December 21, they will appear as one in the sky—their closest approach since the year 1623. The Moon orbits in front of the two giant gas planets from October 21-23. Our Moon is about 450 million miles closer than Jupiter. 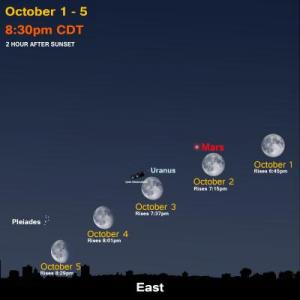 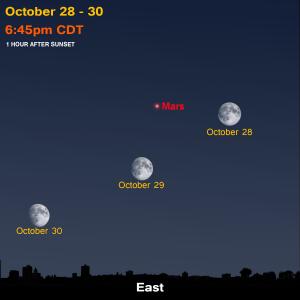 On October 6, Mars and Earth are “only” 38.57 million miles away from each other. It will be another 15 years in September 2035 until they are closer. Mars is at opposition on October 13—meaning the red planet is opposite the Sun. Like a full Moon, it will rise at sunset and set at sunrise. Watch the Moon pass the red planet from October 1-3 and from October 28-30.

Aspiring planet-gazers might try to catch Uranus in the sky. A good, steady pair of binoculars will be needed. Look for it near the Moon on October 3.