“Art and science encounter each other when they seek exactitude.”
- Étienne-Jules Marey, French Physiologist and Photographer 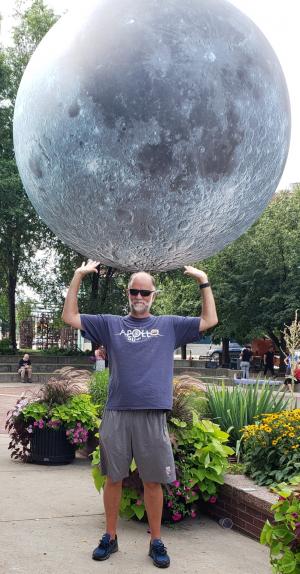 Recently, I stood underneath a giant moon. I even helped hold it up (haha).

This large lunar replica was the main feature in a weekend event called Under One Moon, held August 9-11 at Catalano Square in Milwaukee. While the big moon dazzled, many other events were staged, such as astronomy talks, telescope observing, poetry, music, and dancing. It made me think about the similarities between art and science.

The scientist needs an investigative imagination, as does the artist. As Einstein declared, “Imagination is more important than knowledge.” Both seek truth in their respective ways. Both are looking to comprehend and describe the universe around them. Their methods and followers may be different, but their aspirations and targets are similar. And from my experience, people who practice art and science enjoy their journey of discovery.

We all live with the same moon. Though we share similar descriptions of our night light neighbor, we all see it a bit differently. For example, the Moon is a quarter of a million miles away. Is that near or far? Two scientists might have varying answers.  An astronomer could consider the Moon as right next door. A geologist may surmise Moon rocks are way, way out there. It’s the same deal for two artists. A painter may draw the Moon as caught in the trees, less than a stone’s throw away. A poet may portray the Moon as an extremely long voyage, traveling to a remote distant shore.

The mammoth Moon globe -- 23 feet across — represents both art and science. It was created by a UK artist named Luke Jerram, who calls it the Museum of the Moon. His moonlit sphere traveled to over 25 cities worldwide and has been witnessed by over 3 million people. Thanks to a local Milwaukee group called the Black Box Fund, it made its way to Wisconsin. Lit up from the inside, the model Moon was striking against the cityscape of trees and buildings. 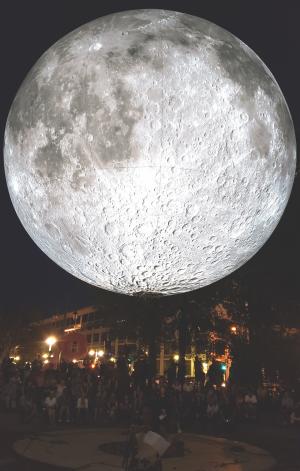 Eavesdropping, I heard many comments about how real it looked. One person noted how 3D it was, that you can actually see the raised mountain and recessed craters.  This realistic appearance came from the science and engineering expertise at NASA. Their Lunar Reconnaissance Orbiter, or LRO, has taken thousands of images with its cameras. This spaceship has been orbiting the Moon since 2009 and is expected to last for at least another seven years. The artist took all the scientific data and made into a stunning attraction.

After my talk at Under One Moon on Friday night, I got to witness four poets read their creations using the Moon as a theme. I enjoyed their poetry very much and marveled when at times they wove various Moon discoveries into their words. I recall one example where the poet invoked the mirrors left on the lunar surface by the Apollo astronauts that verify the increasing distance between the Earth and Moon. That tiny amount, 1.5 inches per year, is not noticeable to the human eye. But in the voice of the poet that growing gap became much more real and alive to me.

One cool thing you notice with the Museum of the Moon is the fact you can see all of it! Just taking a little stroll around the park and voila, I could see the entire Moon! The far side, or the dark side if you’re a Pink Floyd fan, has been out of sight because our Moon is tidally locked with the Earth by their mutual gravity. The Moon spins and orbits the Earth in the same amount of time — a little less than a month. This keeps the same side facing us humans. 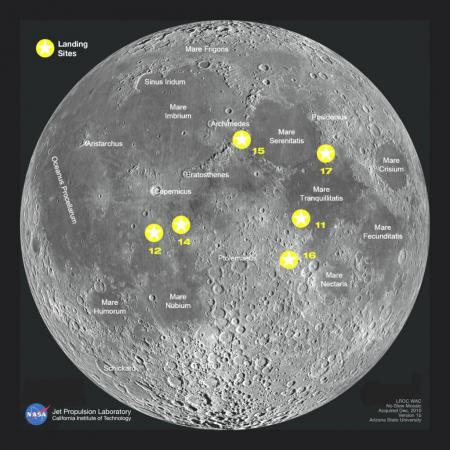 Many moongazers wanted to know where Apollo 11 astronauts landed. I would take out my green laser and show them. There were many conversations that weekend about the Moon.  Some centered on Apollo and all the history, science, and politics about the race to the Moon. Others discussed various cultures and how they interpreted the Moon with their stories. We even tried to see faces and figures on the Moon. We talked mainly, though, about what the Moon means to us, using both art and science. 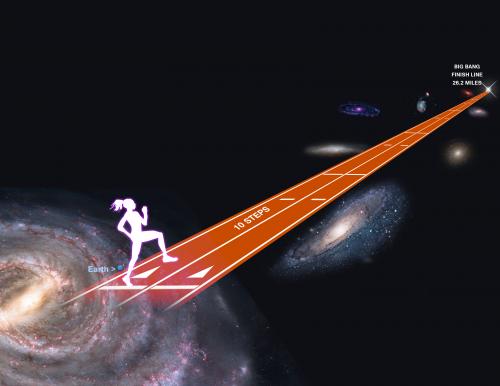 Imagine this marathon stretches from planet Earth to the edge of the universe. Where would you be after your first step? The Moon, Mars, Pluto? The answer is you would land outside our Milky Way galaxy! Billions of stars are already behind you. After 10 shorts steps, you would arrive at the Andromeda galaxy. From then on, it’s nothing but galaxies, each containing billions upon billions of stars. Finally, you arrive at the finish line, the Big Bang, the start of our expanding universe. Congratulations! Your mind just completed the cosmic marathon.

Of course the actual distances to deep space are mind-boggling compared to a puny marathon. They are so vast it’s very difficult to understand, some might say impossible. Our gigantic galaxy is really 100,000 light years wide. Converting that distance to miles is 6 quintillion miles! That’s a six with 18 zeroes after it. Yet, in our cosmic marathon, you traversed that expanse after your first footstep! 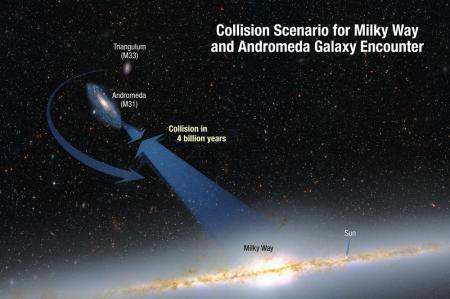 In truth, the Andromeda galaxy is 2.5 million light years away. In your mind marathon, you arrived here without breaking a sweat, 10 steps. Far into the future, people would arrive here even quicker. Due to mutual pull gravity, the Andromeda and Milky Way galaxies will collide one day. Ok, the estimated rendezvous is not for another four billion years. But by then, our Sun will be close to running out of its nuclear fuel. It will have expanded into a red giant star that has incinerated the Earth.

After Andromeda, the path back to the start of the universe is a steady stream of galaxies. As you jog by, who knows exactly what these immense star cities hold? Right now, we can detect their stars collectively and any crazy energetic happenings—things like a supermassive black hole or a blistering supernova. But one might wonder, do these galaxies contain planets? My answer is most definitely, though I don’t have any proof. Would some of these planets have life? No answers to that big question (so far).

By the way, never forget how fast dizzying light is. Your marathon brain may have raced to the edge of the universe in a handful of seconds, but your average unimpeded light photon can complete 7,104 marathons in 1 second.

If you ever want to run a real marathon, it takes about 60,000 steps. And depending on your training, it takes about 3 to 6 hours to complete. I write from experience, having run 50 marathons! 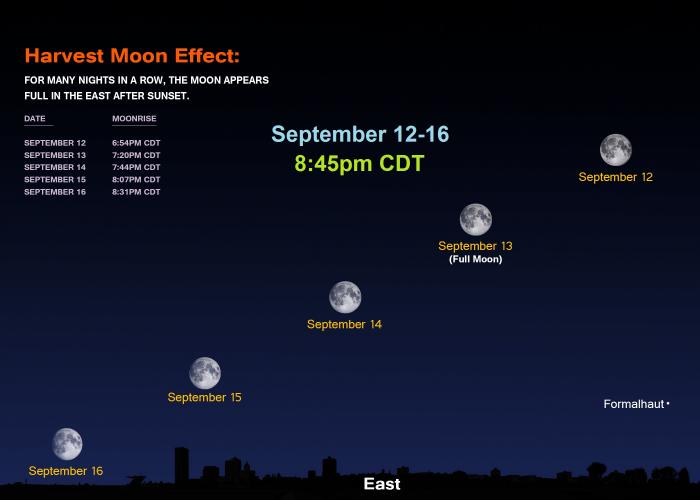 There will be a bunch of Harvest Moons this year. Technically, the Harvest Moon occurs once at the full Moon nearest the first day of fall. This year, that occurs on the night of September 13-14.

But the Harvest Moon effect is the combination of five full moons in a row from September 12-16. Our Moon looks full a few days before and after it is truly full. But the main reason for the Harvest Moon effect is the time of the Moon risings. On average, the Moon rises about 60 minutes later each night. Near the autumnal equinox, the Moon can rise less than 30 minutes later! With these quicker Moon rises, it looks full for many nights in succession. 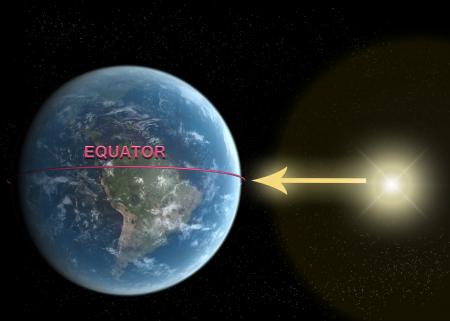 The start of fall, or the autumnal equinox, occurs this year on September 23 at 2:50 a.m. CDT. At that moment, the Sun shines directly over the Earth’s equator. Everyone on Earth will experience approximately 12 hours of daylight and 12 hours of nighttime. The word equinox is Latin and means “equal" and "night.” 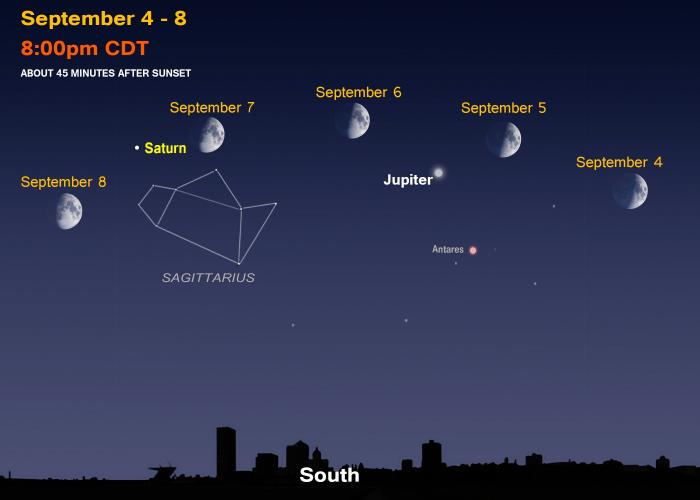 Jupiter and Saturn rule the September evening sky. Spot the solar system giants in the southern sky with the stars of Scorpius and Sagittarius. Track the Moon from September 4-8 as it moves in front of the planets and stars.

Venus is lost in the Sun’s glare to be easily seen. The hot world sets about 30 minutes after the Sun, so an extremely dedicated sky watcher might discern its bright light. Otherwise, Venus does not gain enough separation to become visible until late October.

Mars is in conjunction (behind) the Sun on September 2. After that, it will rise before the Sun in the morning sky, but will not be seen until probably late October.

Mercury is out of sight all month. 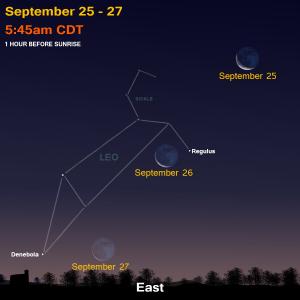 A celestial sign of fall in the morning sky are the familiar stars of Leo. Look for the stars that make Leo’s head, or sometimes called a “sickle” or “backwards question mark.” A waning crescent Moon passes by from September 25-27.