A Tribute to Survival 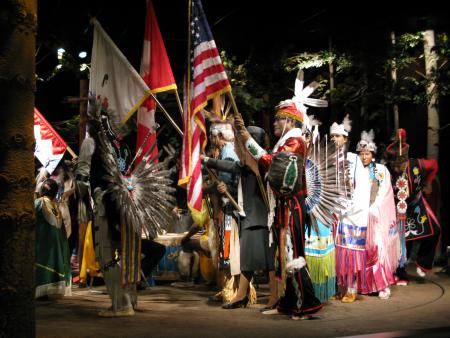 These figures are on an enormous turntable around singers at a drum and pass through areas of theatrical lighting accompanied by the sounds of American Indian music. Various aspects of contemporary American Indian life, reservation and urban, are shown in conjunction with the powwow.

The Indian Country powwow figures are based on life casts of Indian people representing Wisconsin's seven tribes. The local American Indian community has dedicated hundreds of hours to the fabrication of the powwow outfits and drum used in the exhibit.

Other segments present the history of American Indian and non-Indian relations. Subjects such as "The First Americans," "Outnumbered and Outarmed," and "Federal Policies and Indian Strategies" are explored in detail.

The Milwaukee Public Museum is proud to house and care for Native American artifacts and objects.

Other Native American Museums and Cultural Cites in Wisconsin