Birdwing butterflies, genus Ornithoptera, are named "Birdwing" for their tremendous wingspan and body size. Native to the Indo-Australian region, there are about a dozen currently recognized species plus many subspecies and forms. The Museum acquired a number of representative specimens through a donation from James R. Neidhoefer and his wife, Elaine, who amassed a large collection of worldwide Lepidoptera mostly through purchases and exchanges.

The very rare Birdwing specimen shown here, Ornithoptera allottei (Rothschild), was purchased by the Neidhoefers at the auction of the G. Rousseau-Decelle collection in Paris, France on October 24, 1966. It was one of only three specimens known in the world at that time. This butterfly is now recognized to be a hybrid of O. urvilliana x victoriae rather than a separate species. In recent times, steep declines in Birdwing populations have occurred due to loss of habitats and over-collecting. These butterflies are now under legal protection and some efforts are being made to increase their numbers through local butterfly farming practices. 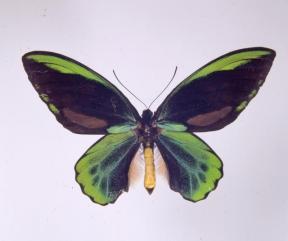 Catalog Number
N/A
6
Back to Top of Page