A German immigrant, Peter Glass, crafted wooden tables with extremely intricate wooden veneer designs, which led him to win two major awards -- one at the Massachusetts Charitable Mechanic Association exhibit in 1850 and one from the American Institute of New York in 1856. Shortly thereafter, Glass moved to Sheboygan, Wisconsin and began one of his greatest feats: A table containing nearly 20,000 pieces of wood. This design depicted faces of military and political heroes, with floral motifs. Today, very few Peter Glass Marquetry tables survive. Similar tables crafted by Glass are located at the Smithsonian Institution and the Illinois Governor's Mansion. The table depicted here is on display in The Streets of Old Milwaukee exhibit, but remains covered to protect it from the damaging effects of the lights. 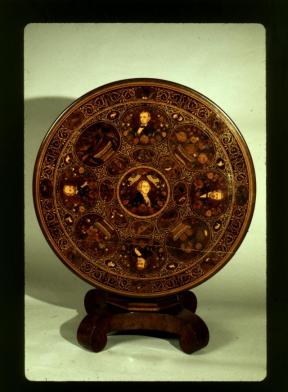