To the Maya of the modern Lake Amatitlán communities, the lake has a longstanding tradition as a sacred place. During Pre-Columbian times, according to legend (see Borhegyi 1959:237-38, Suzanne de Borhegyi 1961), a carved stone figure known as Jefe Dios occupied a hilltop on the north shore of the lake. One night in the 17th century, during a violent hailstorm and earthquake, the figure disappeared. In the morning, the small, painted wooden statue of the Santo Niño, the Christ Child, stood at the water's edge at the base of the cliff. It appeared that the Catholic faith had finally overthrown the old pagan religion. The Dominican friars at the church in San Juan Amatitlán declared the day a holiday and organized a procession of boats to cross the lake to where the statue was found and bring it back to a shrine in the village. Ever since, Maya pilgrims have come from around Guatemala to pray to this miraculous Christ Child and bathe in the healing waters of the lake and hot springs. The appearance of the figure is celebrated every year on May 3, La Fiesta de la Santa Cruz (The Celebration of the Holy Cross).

Figure 15. The Santo Niño de Atocha and the silla where it was found. Photos from 1963.

These days, the celebration consists of parades and offerings to the lake. A procession of priests carries the Santo Nino through the town to the water's edge, where it is placed on a boat decorated with crepe paper and ribbons and a large red cross at the front. Local fishermen decorate their boats as well and create a procession that moves southeasterly around the lake to the Silla del Santo Nino (the underwater archaeological site of Los Organos), where the Santo Nino first appeared. There the Nino resides until late afternoon, when it is taken again in procession around the northern shore of the lake, returning to the same beach from which it started. Along the way offerings of fruit and flowers are thrown into the lake in honor of the Child. 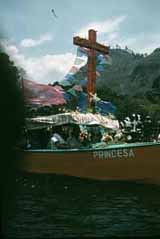 Written accounts of pilgrimages to the Lake Amatitlán area date back as early as 1690, when Fuentes y Guzmán records pilgrims coming to the village of Pampichí, on the southern shores of Lake Amatitlán to see the Santo Niño de Belén (Holy Child of Bethlehem) (Straub 1991:159). By following the history of this Christ Child and the celebrations that accompany it, which always occur on the first Sunday of May or May 3, it seems that it is the same figure that resides in San Juan Amatitlán today, known as the Santo Nino de Atocha.

The identity of the Santo Nino de Atocha was kept separate from the identity of other Christ Child figures in the small church at Amatitlán. At least two others are known: the child representing the newborn Christ in the stall at Bethlehem and one that was held by Our Lady of the Rosary, an image of the Virgin Mary commissioned in 1696 (ibid. 161). The Santo Nino de Atocha had his own personality and was understood to have human feelings - he was opposed to building the embankment at the bottleneck in the lake for the railroad tracks - and tendencies to wander from his shrine in the church, to go swimming, for example, and return the next morning with wet, sandy skin.

In a story recounted by Lilly Osbourne (1959), the Santo Nino always wants to return to his Silla, where he was found, because before Christianity came people would go to that place during the summer solstice to carry out pagan rites before an idol, giving it great offerings that they brought from far away and threw into the lake.

Pokomam Maya (the group living around Lake Amatitlán in the late 17th century) cultural and religious practices lent themselves easily to "conversion" to Catholicism, and a mixed religion developed in which the Maya religious beliefs were often expressed through the means of the Catholic Church. The Maya pantheon of gods were easily associated with the many saints and other holy figures in Catholicism, while paying careful attention to a ritual calendar and following a complex stratification of religious offices was part of the standard Maya approach to life as well. The Pokomam had close religious and cultural ties with the Lowland Maya, which is represented in modern times by the Chortí (Straub 1991:167). Straub (ibid, 167-68) believes that the four main elements of the stories about the Nino de Atocha (the Niño, the bench or silla, the procession to Los Organos, and the Fiesta del Santa Cruz) at Amatitlán can be explained by looking at them through the traditional agricultural year of the Maya.

The greatest ceremony during the ritual year for the Chortí takes place during the winter, the time immediately preceding the rainy season, in order to ensure that the rains will come. This ceremony begins on April 25, the Feast of St. Mark, and ends on May 3, the Celebration of the Holy Cross. During this time prayers, acts of reverence, care for the deities and magical acts are performed so the necessary rain will come to water the seeds. The symbol of a cross plays an important role in the ceremonies. In this context, the cross's function is purely Maya, made of special wood and adorned with specifically-shaped leaves, part of the symbolism of fertility and able to attend to the supplication for rain. The Chortí rituals made use of a small carved wooden image of a child, an objectification of the young god of maize, struggling to emerge from the womb of mother earth into the sunlight. During the Festival of the Holy Cross, the hijo, or "child," of the cross, as he was known, would be bathed in water and reclothed in a ritual designed to bring rain. The child figure also functioned as a solar god and patron saint of the community, when he would wear a small, round sombrero representing the solar disc. The sun god was understood to rest on a bench, or silla, in the various solstitial points. Among the Chortí this is expressed more explicitly during solstice rites in June and December. The chair where the representation of the solar god sat would be carried between ceremonial houses where the god would occupy a specific silla, traveling toward the east in June and back to the west in December. The stone bench was reserved in religious ceremonies for gods of fertility and their priests.

Figure 18. Crowds of people watch the procession around the lake and wait for a turn to visit the Niño at his silla, 1963.

Straub points out that outward similarities in the ceremonies of the Chortí and the Fiesta de la Santa Cruz at Lake Amatitlán should not be mistaken for parallels in meaning to those who participate. The complexities of the original Maya meaning of the elements of the Fiesta may have been suppressed by the Christian beliefs, relegating the ancient beliefs to one of several interpretations for the processionals and other rites that continue today.

Lake Amatitlán and the nearby colonial town of San Juan Amatitlán is now a popular resort area boasting many cottages, a yacht club, and other recreational facilities including some hotels known for thermal baths fed by the hot springs. High population density, overexploitation of natural resources, and a shortage of water in recent years have led to serious pollution problems at the lake and the formation of the Save Lake Amatitlán Foundation.