This unusual 20th-century carving is one of three such known. It is attributed to the Fon culture of the Benin Republic, but is most likely the creation of an Ijebu or Anago artist. These two ethnicities are Yoruba-speaking peoples living in Nigeria and Benin respectively. The meaning of this object remains as puzzling as its origins. The figures in the boat may represent members of the cult of the sea goddess Yemoja or one of her followers. Perhaps the entire composition is intended to represent the cult deities themselves in procession to some important feast. Though a mystery, this excellent composition is a tribute to the skill and creativity of African woodcarvers. This object is currently on exhibit in the Third Floor African Hall. 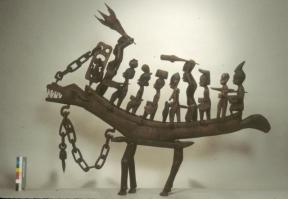