The Milwaukee Public Museum acquired the Howard collection, consisting of over 1,500 items  in 1985, thanks to the generosity of Ethel Herzfeld, a devoted friend of the Museum. James Howard, a cultural anthropologist, was born in 1925 in Redfield, South Dakota. He enjoyed the respect and acceptance of Indian people acquainted with him and participated regularly in powwows throughout the Plains area.

In the course of his studies he became an accomplished singer and powwow dancer, and assembled a large personal collection of outfits. The collection ranges from rare, old styles already out of vogue in the 1930s to fashions current at the time of Howard's death in 1982. Clothing from several different tribes and regions was obtained mainly for powwows. The concentration on men's powwow dress demonstrates Howard's fascination with the more elaborate male dance outfits. This collection is one of the largest and best contemporary powwow collections in the world. What is incredibly valuable is that Howard recorded who made each item and when and where he collected them. 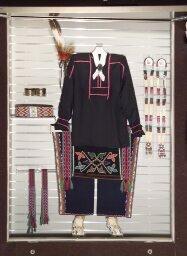