In 1904, this mortuary totem pole was exhibited at the Louisiana Purchase Exposition. It was apparently too fragile to journey back to Alaska, and therefore entered into the collection of the Milwaukee Public Museum. "Totem Poles" are appropriately called "crest poles" because they display family-owned symbols of a particular kinship group. Crests can be compared with the "Coats of Arms" of European noble families.

This pole is the type known in Tlingit as a Qadakedi (kaw-duh-KAY-dee), which literally means a "body or man's box," and is generally referred to as a "mortuary" pole. It was purchased from a Tlingit house-chief named Yennate (or Yun-nat) who lived at the village of Tuxekan on Prince of Wales Island, Alaska. The pole was carved to honor the mother of Yennate (YEN-nah-tay) who was, like Yennate, a member of the Raven division of the Tlingits.

Reading the pole from top to bottom, the first two elements, a figure called “Diving Raven” and a bear, are a single element relating to how Raven, the Creator Being of the Tlingit, married Bear and then tricked him, causing his death. Beneath the Raven and Bear motif is a human figure representing the uncle of Yennate’s mother who was also Yennate’s great-uncle. This man was said to be a powerful shaman and may have been the great shaman of the Henya Tlingits called Shahowa or Skah-Owa (Fire Eater). This object is on exhibit near the down escalator on the Second Floor. 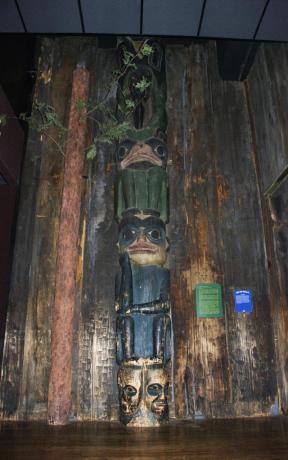