This collection was obtained from the Ndyuka of Suriname, a small Caribbean country on the northeast coast of South America. The Ndyuka are one of the six major Maroon groups living in either Suriname or nearby French Guiana. Maroon is a term used to denote the descendants of African runaway slaves from Dutch plantations during the late-17th and early-18th centuries. The culture is thus strongly rooted in West and Central African cultural traditions with some Amerindian influences. The collection of over 50 items, the majority donated by Peter French in 1945, relates to everyday activities, such as kitchen utensils, a laundry beater (as pictured here), and hammocks. Few museums in the United States have collections from the Ndyuka. See Ndyuka items exhibited on the Museum's Third Floor where the African and Latin American Halls converge. 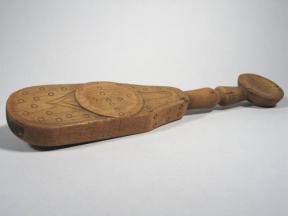