Once the most common bird in North America, the passenger pigeon (Ectopistes migratorius) or wild pigeon lived in enormous migratory flocks that some estimate were between three  to five billion upon European arrival.

The species went from being one of the most abundant birds in the world during the 19th century to extinction early in the 20th century. Some reduction in numbers occurred because of habitat loss when the Europeans started settling further inland. The primary factor emerged when pigeon meat was commercialized as a cheap food for slaves and the poor in the 19th century, resulting in hunting on a massive scale. Martha, thought to be the world's last passenger pigeon, died on September 1, 1914  in Cincinnati, Ohio.

The Milwaukee Public Museum has more than a dozen passenger pigeons in its Vertebrate Zoology department collection. 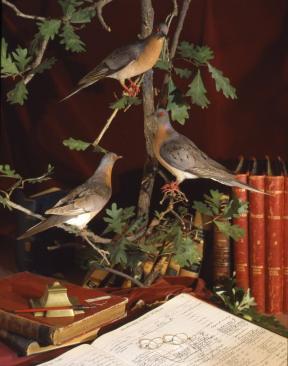 Catalog Number
N/A
113
Back to Top of Page