The Museum's Chamacoco Collection consists of 70 objects, such as this belt ornament made of tropical bird feathers, and represent items both for everyday use and for ceremonies. Collected in 1925 by the Museum of the American Indian in New York, they came to the Milwaukee Public Museum that same year. The Chamacoco live in the Gran Chaco region of northwest Paraguay. The Chamacoco today alternate between their traditional hunting and gathering and more recent light agriculture, craftsmanship, or labor. Their population has dwindled from several thousand to approximately 1,000 people today, and few museums in the United States have such collections. 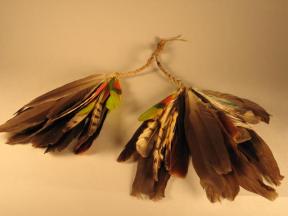