“Every book is its own black hole. Don’t fight the pull; find out where it takes you.”
- Richelle E. Goodrich, American Writer

Shedding Light on the Black Hole 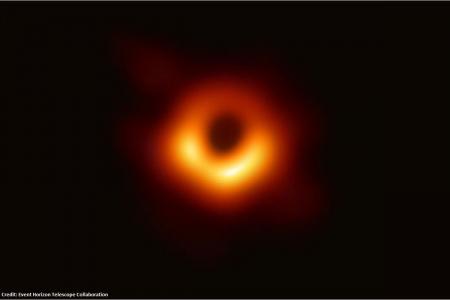 I’m not sure what is more amazing: Is it the very first black hole picture at the core of a galaxy called Messier 87, or is it the media splash it created? Regardless, our collective curiosity definitely spiked. It seemed to be pulled by the black hole’s enormous gravity -- but black holes don’t pull in nearby stars or planets. More on that later -- read on!

The name “black hole” is beguiling but a bit misleading. Darkness reigns because their gravity is so strong, not even light photons can escape. On the flip side, stuff gets crazy bright and hot — hundreds of billions of degrees Fahrenheit -- before it is captured by the monstrous black hole.

The different colors you see are the varying heat intensities ferociously circling the invisible gravity well. The yellow-white areas show the most intense heat. Red areas are still powerful but a little less hot. The black part is the black hole casting its dark shadow on the bright swirling background.

The colors are false. Sc 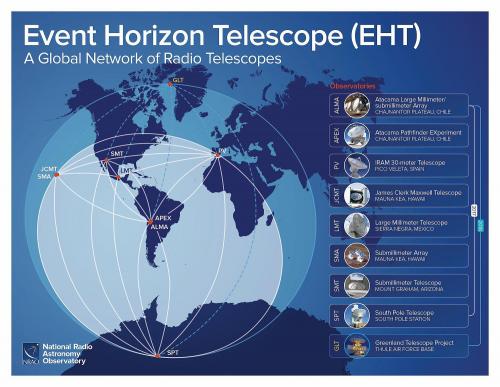 ientists from the Event Horizon Telescope (EHT) project created the image based on the radio energies near the black hole. Radio telescopes were used because they could get better resolution. Researchers combined eight telescopes across planet Earth to act as one giant 8,000-mile wide telescope! Not that anyone wants to get too close, but human eyes would probably see a white color with tinges of blue and red as the hot material moved toward and then away from the viewer.

The new black hole snapshot is impressive, but probably not captivating. Animations and artist drawings tend to be more colorful and spectacular. But there’s something about staring at a real picture, especially the first one. We can let our imaginations create the intense whirlpool. We can stare at the black hole itself, wondering where it all leads to. A cosmic tunnel — a wormhole to another galaxy? Or perhaps matter caught in its grasp becomes another universe? 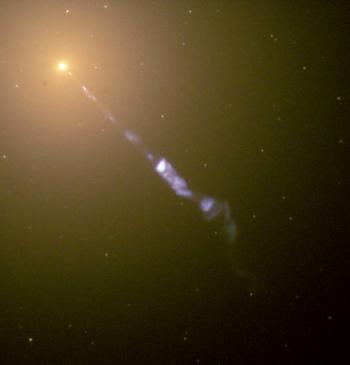 The effect of a black hole has been photographed before. In 1998, the Hubble Space telescope took this picture of the same supermassive black hole at the galactic core of M87. The yellow light is the actual galaxy M87, a concentration of over a trillion stars. The blue jet emanating from its center is a black hole-powered stream of material that is moving near the speed of light. Astronomers first theorized of supermassive black holes at the core of galaxies almost 50 years.

The idea of a massive star with gravity so strong light could not leave its surface was first imagined in the 18th century by John Michell and then Pierre-Simon Laplace. Michell called them “dark stars.” In 1915, Albert Einstein allowed us to “see” the geometry of gravity in his general theory of relativity. His equations shed more light on the possibility of a black hole, but Einstein never warmed up to the idea they could be real.

The name "black hole" didn’t arrive until 1967 by American astronomer John Wheeler. Finally, in 1971, the first black hole, Cygnus X-1, was confirmed. It’s about 15 solar masses and is located over 6,000 light years away in the constellation Cygnus.

The Earth is in no danger from Cygnus X-1. This black hole does not pull the Earth any closer. Neither does the 4-million solar mass black hole at the center of our galaxy called Sagittarius A. Black holes are like a Venus fly trap. They can only capture you if you get too close — inside its gravity well — and lack sufficient speed to get out. If you move even closer, inside its event horizon, forget it. Nothing escapes that, not even light. Think of it this way: If the sun somehow squeezed itself into a black hole, with the same mass, the Earth would not fall in. (Though, surely we would be in trouble without its light and heat.)

Before we finish up with this black hole story, we must illuminate all the people who worked together to construct this cosmic portrait. The Event Horizon Telescope (EHT) project is an incredible collaboration of 200 people, 60 scientific institutions across, more than 20 countries, and eight observatories! One of the leaders is not an astronomer or physicist, but a computer scientist. Katie Bouman led the development of a computer program algorithm that created the first-ever image of a black hole. She first started the algorithm three years ago as a graduate student at the Massachusetts Institute of Technology (MIT). On Facebook, she wrote, “No one algorithm or person made this image. It required the amazing talent of a team of scientists from around the globe and years of hard work to develop the instrument, data processing, imaging methods, and analysis techniques that were necessary to pull off this seemingly impossible feat.” (Katie is in red on the right, below.)

Indeed. The dedicated team coordinated and lined up all the telescopes to take radio energy readings from the distant galaxy starting two years ago. Synchronizing and focusing these radio “eyes” at the same time created the Earth-size telescope with astounding resolution! One comparison said it was like being able to read a newspaper in New York from across the ocean in Paris.

Amazing job, EHT! And thank you. 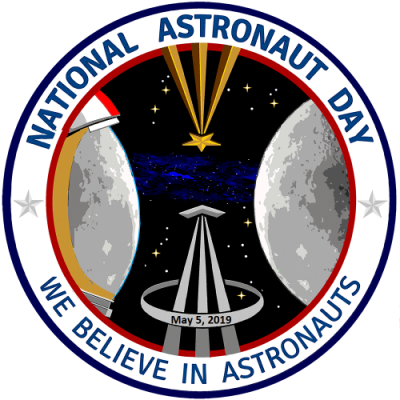 So May 4 (may the force be with you) is now Star Wars Day. But May 5 is the real National Astronaut Day!

Astronauts have always inspired us. Perhaps the most famous astronaut is Neil Armstrong, the first to walk on the Moon. This summer on July 20, we will celebrate the 50th anniversary of this historic event.

May 5 was chosen to be National Astronaut Day because it was on that day in 1961 that astronaut Al Shepard Jr. became the first American in space aboard the Freedom 7 Mercury space capsule. His suborbital flight was not that impressive; it lasted a paltry 15 minutes and reached a height of only 116 miles into the atmosphere. Still, it was a milestone achievement and started us on our journey to the Moon.

How many astronauts have flown into space? The answer is 553 as of January 2018. The list includes people from 37 different countries. Only 24 people have gone beyond low Earth orbit by going to the Moon. Three of them did it twice — James Lovell, John Young, and Eugene Cernan. 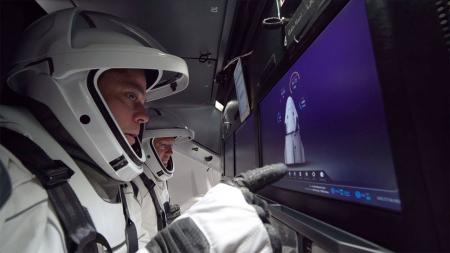 America stopped launching astronauts into space with the last Space Shuttle mission in 2011. That is planned to change this summer. In July, a Space X Falcon 9 rocket is scheduled to launch two astronauts to the International Space Station (ISS). Space X completed a successful test flight to ISS in March and has another test mission scheduled for June. If successful, then hopefully by July, two NASA astronauts, Robert L. Behnken and Douglas G. Hurley, will make their way to the space station. 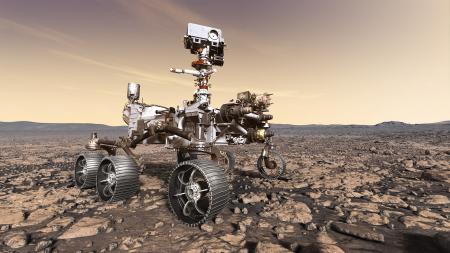 Who knows when astronauts will go to Mars? NASA is planning for it. A recent independent report said it could happen by 2033. But frankly, these are educated guesses. It may happen, but many budgets and missions have to occur before we get a more definite estimate year for astronauts walking on the red planet.

In July 2020, NASA does plan on launching its Mars 2020 rover. It is expected to land by February 2021. The mission has a drill that can collect soil and rock and set them aside for a possible future mission that would return them to Earth.

The spacecraft is being assembled as we speak in Pasadena, California at the Jet Propulsion Laboratory. The Mars 2020 rover will conduct numerous geology tests and assess natural resources and hazards for future human explorers. The search for signs of ancient Martian life will also take place. 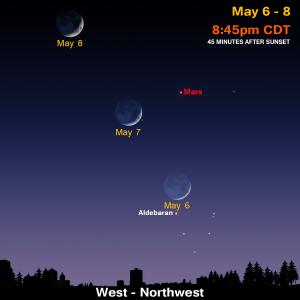 Mars is on its last legs, but you can still catch it in the west after sunset. The red planet has grown so much dimmer than its last close approach to Earth in July 2018. It is barely brighter than the North Star, which is the 41st brightest star in the night sky. The next time Mars and Earth are close is October 2020. Watch for the Moon nearby from May 6-8. 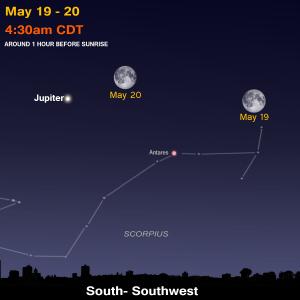 Jupiter can be seen by night owls in early May. It rises in the southeast about 11:00 p.m. local time. By the end of May, the king planet rises shortly after 9:00 p.m. local time. On June 9, Jupiter will rise as the sun sets and be at opposition. The Moon shines near Jupiter and the bright red star Antares on May 19-20. 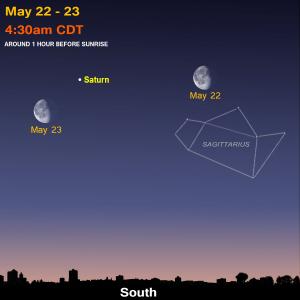 Saturn rises about two hours after its bigger gas giant sibling. This means by May 31, the ring jewel rises just after 11:00 a.m. local time. The Moon swings by on the nights of May 22-23. 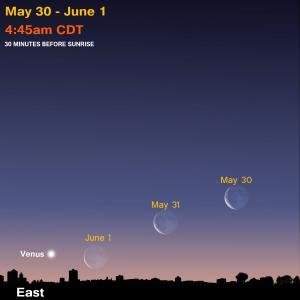 Venus can be seen, but it’s not going to be easy. It stays just above the horizon all month. Look about 30 minutes before sunrise. Use the Moon from May 30 - June 1 to help guide your way -- though it will be such a skinny crescent and difficult to spot, too!

Mercury will be a struggle to see all month; it’s simply too close to the Sun.