“If there is magic on this planet, it is contained in water.”
- Loren Eisley, American Anthropologist & Writer 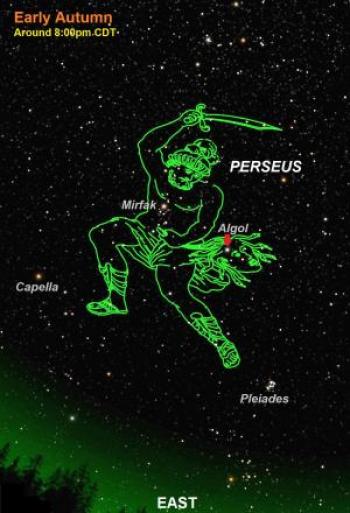 Upon closer examination, a few stars do change. Take the star Algol, about 90 light years away in the constellation of Perseus. Algol marks Medusa’s head. It’s fairly bright, shining at a magnitude of 2.1, the sixtieth-brightest star in the night sky -- but it doesn’t stay that intense. Every 2.87 days, Algol slowly dips in brightness to 3.4 magnitude. After 10 hours, the star is back to its regular brilliance.

Long ago, this changing light was scary. In fact, Algol means “ghoul” or “demon.” It was easy to connect this evil appearance to the evil spirit of Medusa, a Gorgon (a monster with snakes instead of hair in Greek mythology). The name Algol is Arabic which, when translated to English, means “the ghoul.”

Besides the sky, there are many Gorgons in ancient architecture and art. Gorgons date all the way back to the Greek author Homer over 3,000 years ago. If you caught the Gorgon’s powerful and horrific gaze, you would turn to stone.

Who is stealing this star’s light? Turns out Algol has a partner in crime, a companion star that eclipses its light. Algol itself is a hot, bright blue star that gets partly obscured by its cooler, dimmer, but bigger, collaborator. Astronomers also found a third red dwarf star in this system; it’s too small and dim to affect the light of the other two stars.

There are many scary stars in the heavens. Actually, they are properly called variable stars. Besides eclipsing variables, another cause is when a star changes its brightness all by itself. These are called Cepheid variables. The name comes from the first one ever discovered, Delta Cephei -- a giant star in the constellation Cepheus the King around 880 light years from Earth.

Delta Cephei is dimmer than Algol. Its magnitude ranges from a bright maximum of 3.5 to a low at 4.4 over a regular cycle of 5.37 days. The star’s rise up to top brightness takes about a day and a half, while dimming to minimum takes almost four days. This recurring cycle takes place in the star’s outer layers. It is caused by the outward radiation of hot stellar gases and the contraction due to the star’s gravity. It has been compared to a human heart, which expands and contracts with a synchronous rhythm.

These Cepheid variable stars are often called “standard candles.” This is because their pulsating cycle is proportional to their luminosity, or the total amount of energy radiated by the star. If the time of a star’s brightness cycle increases, then its luminosity goes up, too. If you know a star’s luminosity, then you measure its actual brightness in the sky. Having these two numbers allows you to figure out the distance. 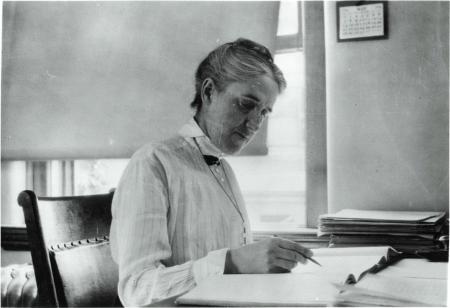 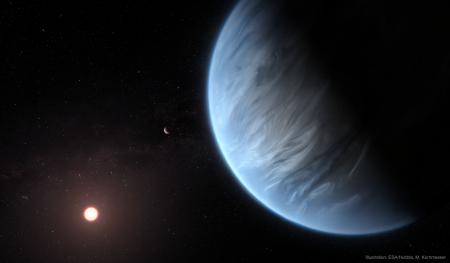 You may have heard there was a recent discovery of water on a super-Earth exoplanet orbiting in a star’s habitable zone 110 light years away in the constellation Leo the Lion. With news like that, it seems the possibility of extraterrestrial life is high. But let’s take a closer look.

Astronomical naming protocol has dubbed this world K2-18b. This was the first detection of water within a star's habitable zone. This orbital area is where temperatures allow liquid water to exist. Water is essential to life as we know it.

On the surface, this is exciting news! But we need to make clear a few of these poignant facts. Otherwise, imaginations might leap to thinking life here is more probable than the findings allow.

The term “super-Earth” is misleading. Hearing the word “Earth,” our minds can leap to a bigger world where life is plentiful. Look at the artist picture released with the discovery. It looks blue and friendly with life below the clouds.

Most scientists think K2-18b is more like a mini Neptune. K2-18b is about 2.7 times the diameter of Earth, and nine times more massive. Astronomers think it’s mostly a gas world. Could life exist in a gaseous atmosphere? Or does life need a rocky surface with large water areas like our oceans? 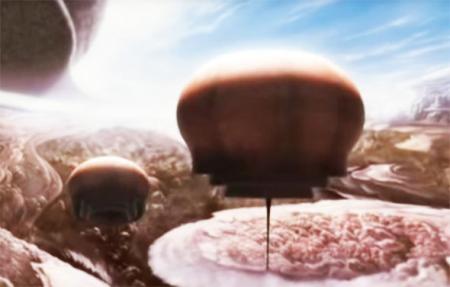 We really have no idea to those questions. Maybe live could live off water vapor in a gas planet’s atmosphere. Carl Sagan imagined “floaters” living in Jupiter’s atmosphere over 40 years ago.

Water is ideal for life. It can dissolve nearing anything. We know this when washing our face or cleaning up a mess. Water is also great for transportation. It can penetrate living cells, taking in what is needed like energy and food. On the flip side, water helps dispel things that are not needed, like deadly or toxic substances. 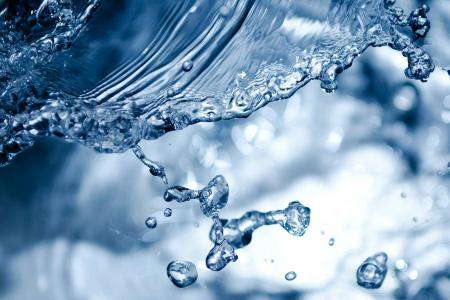 Water does all this because of its unique chemical configuration. The two hydrogen atoms are bonded to an oxygen atom. This means H2O has polarity. The hydrogen atoms are usually on one side, making a positive part. Oxygen has a negative part. This polar alignment allows water to dissolve other polar substances very easily.

With a star like the Sun, the habitable zone is estimated to extend from about 0.9 to 1.5 astronomical units (AU). The Earth is 1 astronomical unit, or 93 million miles. Mars is located about 1.5 AU, meaning it might be capable of having liquid water if it had a thicker atmosphere. Mars does have water ice at the poles and traces of water vapor in its mostly carbon dioxide air. 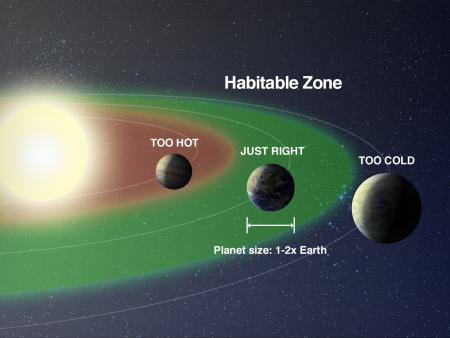 K2-18b orbits a cooler red dwarf star. Its location is much closer — about 0.14 AU, or about 13 million miles from its star. That would be about three times closer than Mercury is to our star. The calculated habitable zone for a red dwarf star is 0.12 to 0.25 AU. This exoplanet only takes 33 days to make one orbit.

The exoplanet K2-18b has water vapor and is located in a place where liquid water could exist. But adding up all the facts, the distant planet is not much like the Earth, and possibilities for life are lower than headlines have suggested.

Currently, humans have verified 4,000 exoplanets. But this number is the tip of one gigantic, galactic iceberg. Most assuredly, there are billions of planets in our Milky Way galaxy. Right now, whether or not life exists out there is up to you.

A Little Black Spot on the Sun

Mark your calendars on Monday, November 11, 2019 for a rare sky event when the smallest planet Mercury crosses the face of the Sun. This will be the last Mercury transit in Wisconsin until May 7, 2049 -- almost 30 years from now! A Mercury transit last occurred here on May 9, 2016. There will be one in 2032 and 2039, but they will not be visible from Wisconsin.

Mercury’s silhouette on the Sun is quite small and a telescope is needed to spot the planet. A Mercury transit was first observed in 1631 and was predicted by Johannes Kepler, the discoverer of the three laws of planetary motion. Telescopes with special safety filters will be available here at the Museum starting at 7:30 a.m., clear skies permitting. 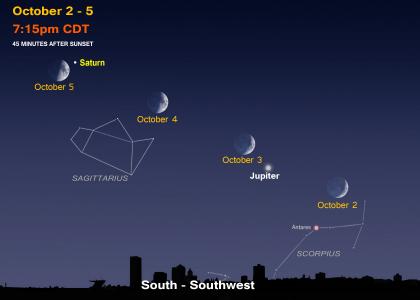 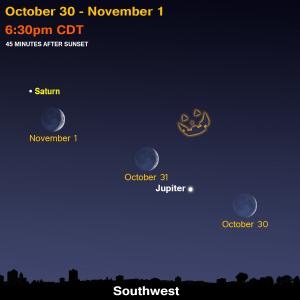 Jupiter and Saturn dominate the early October evening sky. The two gas giants are easily seen in the southwest sky after sunset. The Moon passes by from October 2-5. The Moon swings by the distant planets once again from October 30 to November 1. 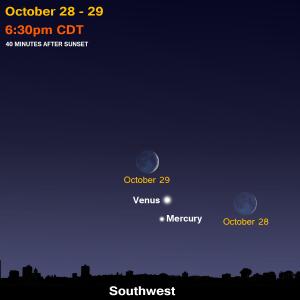 Venus is back — barely. Look for it very low after sunset toward the end of October. Mercury will be just below brilliant Venus and will be much harder to locate. The Moon will be an excellent guide on the nights of October 28-29. 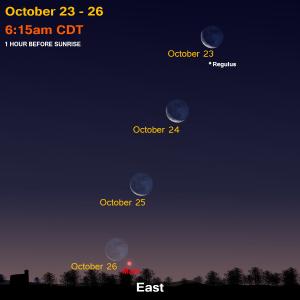 Mars is barely visible in the morning sky again toward the end of the month. Look low in the east just as dawn approaches. A waning crescent Moon may help you on the mornings of October 23-26.