Sometimes in the discussion of Pompeii one reads that the city was “perfectly” preserved for future generations or that we can see all aspects of daily Roman life preserved there. This is not quite true. Records suggest that Mt. Vesuvius had likely been giving warnings for days of an impending eruption. We can assume that some people – we can never know how many – had already removed their possessions and fled the area well before the final days. Also, after the eruption and centuries before the publicized rediscovery of the buried cities, people had been digging tunnels and holes into the cities. Whether these were the survivors returning to reclaim abandoned possessions or looters looking for gold and precious materials we don’t always know, but we do know the cities of Pompeii and Herculaneum were not left completely undisturbed.

House of the Surgeon Today
(Photo courtesy of Elisabetta Cova)

The true value of these buried cities is that they were left nearly intact, without overlays of later buildings and civilizations. Unlike other sites in the Greco-Roman sphere, where generation after generation remodeled or built over existing structures, these cities stand frozen at a specific point in time. Here are the traces of daily life – the brothels, the shops, the architecture, and the culture of the first century AD – without the impact of later habitation layered and intermingled on top. While perhaps not a “perfect” picture of daily Roman life, it is most certainly one of the least sullied by latter-day structures and changes.

For centuries before this time, most medical care in the Roman Empire was the responsibility of the pater familias, the head of the household. He was expected to know enough to care for most illnesses or injuries of family, slaves, and livestock. There were few medical specialists outside the household, but after Rome conquered the Greeks an influx of new medical practices and knowledge were blended with the old. Greek physicians were sold into the households of the wealthy, introducing a new level of treatment and care for the elite. Skilled physicians were only for specialized care and only for those who could afford them.

As the Greek medical practices became more commonly accepted within the Roman Empire, numerous individuals set themselves up as doctors or medical caregivers. Skilled practitioners ranged from experienced midwives to freed Greek doctors with knowledge and training. Unfortunately for the less wealthy, there were many others who simply called themselves medicus (Latin for doctor) and sold their services to anyone who could pay. There were no laws governing the practice of medicine or medical care, nor any organized schools. Not surprisingly, physicians, doctors, surgeons, or the multitude of others practicing some form of medical care were generally not well respected. Being a doctor was viewed as merely a trade, much as a blacksmith or fruit vendor. The grab bag of care available to the less wealthy - prayers to Roman gods, poultices of rotting pig flesh, and the highly erratic training (often as short as six months following another doctor around) – could lead to a very uncertain outcome for the patient. 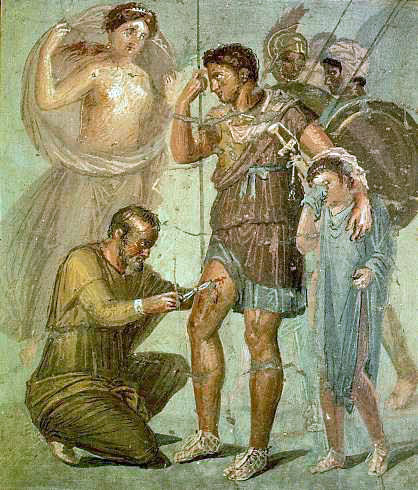 Nonetheless, there were aspects of Greco-Roman medical care that were quite advanced and often successful. Many medical advances arose from repairing the damage to human bodies on the battlefield. Because gladiators were of great value, rather like today’s high-priced athletes, they had some of the best medical care in the Roman Empire. The empire’s soldiers, particularly the higher ranked military elites, also had excellent care. By the time of the 79 AD eruption of Mt. Vesuvius, better surgeons and specialists were successfully performing bone setting, bladder catheterizations, cataract surgeries, cauterization of cancers, and other forms of bodily repair.

Women were both patients and practitioners. While most physicians and surgeons were male, Greco-Roman midwives by the 1st century AD were frequently female. Techniques for performing mastectomies, preventing pregnancy, and delivering babies were common and often successful.

Medical knowledge of the time also included the medicinal uses of plants, animals, and other elements. For example, the use of wines with herbs was an effective method for extracting active ingredients and the use of vinegars to bathe wounds may have helped reduce infections. Interestingly, some physicians followed a practice of washing tools between patients, perhaps only for religious reasons, but this would have improved a patient’s chances of surviving the treatments.

The ancient and historical texts of authors such as Pliny make reference to medical tools quite like those in the MPM collection. Based on the ancient texts and the context in which they were found, it is assumed that some tools were used only in surgery. Others, however, are commonly found in non-medical settings, suggesting more mundane purposes. Probes and spatulas may have been used as surgical probes or medicament preparation tools, or simply as makeup applicators. Shears may have been used to remove hair prior to surgery, but may also have had daily household uses, such as trimming a beard.