The Early Beginnings of Iranian Pottery

The analysis of pottery can tell us a great deal about how people lived in the past. Because of its durable quality and common usage, pottery is a very useful and abundant material that can help to answer questions regarding daily life activities, beliefs, past economies, political systems and social organization (Sinopoli 1991:83). Some of the earliest evidence of Iranian pottery dates to the Neolithic Period around the 7th millennium B.C. (Kawami 1992:9). Before the invention of the potter’s wheel in Mesopotamia around 4000 B.C., pottery was handbuilt using the coil or molding method. The style and shapes of early pottery on the Iranian Plateau are similar to its near neighbors to the west in Mesopotamia and Anatolia, providing evidence of cultural familiarity throughout the region. Though much of earliest forms of pottery lacked decoration, these vessels were functionally efficient and allude to an early awareness of how to manipulate clay into functional containers. Around the 5th millennium B.C., exterior painted decoration made from organic oxides appears in the form of geometric designs, in addition to representations of animals and symbols (Fukai 1981:1).

By the 4th millennium B.C., stylistic motifs of terracotta figurines and vessels suggest evidence of ritual or religious activity within the Iranian plateau (Ghirshman 1954:44). Decorative representations of a divine couple are depicted on pottery. Gods were associated with symbols of natural elements of power, like storms and lightening, and the female goddess was shown in the representation of the sun or the Earth. (ibid p.62) Below is an example of a stylized representation of a ceramic head, which may have been used in a religious or ceremonial context. 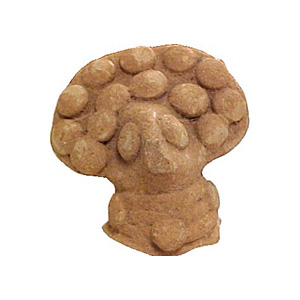