A Brief Synopsis of Iranian History: From the Paleolithic to the Mongols

The earliest evidence of human occupation within the Iranian plateau comes primarily from archaeological remains in caves and rock shelters that date to the Early Paleolithic, circa 45,000 BC. (Fisher 1968). These early inhabitants lived in a very dynamic environment, which required a mobile lifestyle of hunting and gathering. It would not be for another several thousand years that these short-term encampments began shifting to longer-term sedentary settlements centered close to rivers and fresh water sources. Some of the earliest open-air settlements in the world are found in Iran and dated to around 10,000 years ago (Matheson 1979:23). This period marks the beginning of the Neolithic revolution, which is characterized by the expansion of agricultural communities and increased social complexity, resulting in innovations in material culture, particularly the development of pottery.

Sometime around 5000 B.C., people began mining and manipulating the plentiful metal resources of the region, specifically copper. This period is known as the Chalcolithic and lasted until about 3500 B.C., at which time metallurgy became much more sophisticated by adding tin to produce bronze, marking the beginning of the Bronze Age. During the next 2,000 years, bronze technology became the predominant material for manufacturing weapons and high-status vessels; meanwhile, pottery continued to be refined and elaborated. By around 1500 B.C., iron began to be exploited alongside bronze for the production of weaponry, which marks the transitional period into the Iron Age and the subsequent city/states that began to consolidate their influence over a broader region. Some of these regional powers are known as the Elamites, whose capital was located in the southwestern city of Susa, the Babylonians and Assyrians of Mesopotamia, the Hittites of Anatolia, and the Scythians from north of the Caspian Sea. It was during this period that the first Indo-Iranians are believed to have moved into Iranian plateau giving rise to Iran’s first major empire, the Medians.

The Median Empire is considered the first Iranian empire, whose core area was located in the northwestern part of Iran near the Caspian Sea. This civilizations’ influence was extended over a vast territory, from western Turkey to Northern Pakistan. The Medians were united under Cyaxares, who was able to consolidate power among several tribal groups that routinely waged hostile campaigns against rival kingdoms, such as Assyria, Babylon, and Nineveh. It was not long, however, before Median influence waned and a new Iranian empire was born, known as the Achaemenids.

The Achaemenid Empire was founded by Cyrus the Great and was Iran’s first political government from 559 B.C. to 330 B.C. During this period, the Greeks referred to this civilization as Persians, named after the Achaemenid capital in the southwestern city of Pars. The Achaemenid Empire expanded through a series of military campaigns into central and southwestern Asia. To the west, Cyrus defeated the Lydian king Croesus in 546 B.C., which secured power in Armenia, Asia Minor, and the Greek Colonies. To the east, Cyrus defeated Parthia and Bactria. After he captured Babylonia in 539 B.C. and freed all of the Jews being held captive, he received mention in the Book of Isaiah. Darius I took control of the empire after Cyrus’ successor, his son, had killed himself. Like Cyrus, Darius became powerful leader and continued to maintain the will of the Achaemenid empire over a vast territory. However, after his death in 486 B.C., the empire became vulnerable to the outside world and would soon fall to a powerful force to the west, Greece.

Under the leadership of the famous Macedonian solider Alexander the Great, the Greek and Iranian peoples became united. As a result of a major influx of Greeks into Iran, they brought with them a Hellenistic artistic tradition, which eventually influenced much the art and architecture of Iran during this period. In the years after the death of Alexander the Great in 323 B.C., the vast empire was divided and placed under the power of his generals. One such general was Seleucus, who, in the late fourth century B.C., was successful in consolidating much of Iran into what became known as the Seleucid Empire. However, in 247 B.C., Arsaces I led a revolt against the Seleucid government and subsequently established an independent dynasty, known as the Parthians.

Like many of the empires before it, the Parthians became yet another influential Near Eastern empire between 247 B.C. and A.D. 226. The Parthians were successful in fostering extensive trade relations with Central Asia and China; however, they engaged in considerable conflict with the eastward expansion of the Romans. On several attempts, the Romans tried to conquer the Parthian Empire but failed until the reign of the Roman Emperor, Trajan. In A.D. 116, Trajan won battles in Armenia and Babylonia and eventually took over the Parthian capital in Susa, Iran. Shortly thereafter, Trajan’s successor Hadrian returned the territories back to their previous rulers. In A.D. 224, the Parthian king was overthrown and the new Sassanid dynasty was established. 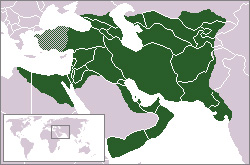 Sassanian means dominion of the aryans (Iranians). The Sassanian Empire is considered to be one of the most influential periods in Iran and the last great empire before the coming of Islam. Sassanian influence can be seen in art from China and India. The Sassanian Empire tried to revive the Iranian culture and traditions and also tried to eradicate the Greek cultural presence in the region. The main religion during the Sassanian rule was Zoroastrianism, based on the teachings ascribed to the prophet, Zoroaster. The religion placed strong emphasis on the principals of Good and Evil. The end of the Sassanian period came in A.D. 631 when an area spanning from Spain to India underwent a permanent transformation under the influence of an emerging cultural and religious movement, known as the Islamic conquest.

Between the years A.D. 660-750, Iran came under the authority of the Umayyad dynasty, which acted to consolidate Muslim unity through Islamic Law, Sharia. By A.D. 750, the Abbasid government, from its seat in the Mesopotamian city of Baghdad, began exerting its influence over the Iranian plateau. Nevertheless, over succeeding centuries of Islamic rule, semi-autonomous dynasties continued to control different regions of the country. One of the most influential dynasties under the Abbasid government was the Tahrids. The Tahrids capital was located in Merv, situated in the providence of Turkmenistan, east of the Caspian Sea. However, in A.D. 820, the capital was moved to Nishapur in the Khorisan region of eastern Iran.

Iran at this time was not influenced by the Islamic art and architecture to the west but rather was more influenced by Central Asia. In A.D. 1000, the Saljuks led a campaign into Transoxia in Turkmenistan, which facilitated in establishing greater Central Asian influence. By the end of the 10th century A.D., the Saljuks controlled the majority of Central Asia. Many cosmopolitan cities were subsequently established along the major thruroughfares of trade and communication, known as the Silk Road, leading from China to the Mediterranean.

Unified under the rule of Genghis Khan in the 13th century A.D., these equestrian experts spread from the Central Asian country of Mongolia, thus becoming known as the Mongol invasion. The Mongols were an alliance of several different tribes from the region and unified to form one of the largest empires the world has ever known. Under their violent reign, they controlled a region from Eastern Europe to Indonesia. By A.D. 1294, the Mongol Empire was split into four different regions. One of the four dynasties under the Ilkhanate rule included Iran, as well as parts of Iraq, Afghanistan, and Pakistan. The Mongol Empire ended in A.D. 1334 under the rule of Genghis Khan’s grandson, Mongka Khan. The widespread destruction left in the wake of this empire can be seen throughout Iran at sites such as Rayy and Susa.