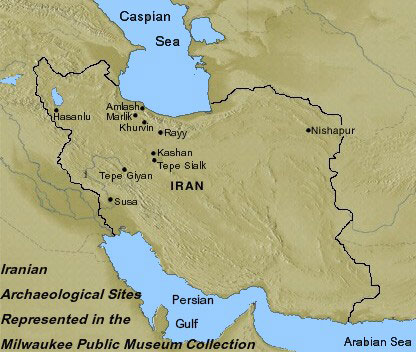 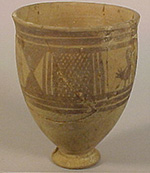 A54092/19970
Pottery Cup; Susa I, Iran; 4000 B.C. Susa is one of the oldest settlements with occupation dating as early as 7000 B.C. Susa was the capital of the Elam Empire, located in the southwest region of Iran near the Karkheh River. Pottery from this site is generally painted with geometric patterns and stylized, simplified animals. Prior to the 4th millennium B.C., archaeologists believe that women were primary makers of pottery. With the invention of the tournette, a primitive potter’s wheel, the task of pottery-making was transferred to men, though women still continued to make pottery by hand. The ornamentation on this pot is not typical for the pottery around this time period in Susa. The use of decoration on the pottery is indicative that it may have been distinguished as a special purpose vessel, commonly associated with burial rituals.

The MPM ceramic assemblage from Amlash is extensive, consisting of over 50 vessels, 29 bronze objects, 2 bronze projectile points, and one gold beaker dating to the Late Iron Age, circa 1200-800 B.C. Amlash is a modern town located in the Gilan province of northwestern Iran, along the uplands of the Elburz Mountains east of the Sefid Rud river valley. The majority of the vessels are in excellent condition and therefore likely come from clandestine excavations of local megalithic tombs built by a Indo-Iranian people considered to be part of the Marlik Culture (Negahban 1996:325). The quality of art and pottery from this region is appears to be more elaborate than the other areas of Iran at this time (Culican, 1965:32). Though Amlash is located near Mesopotamia, there is little direct influence from these southwestern cultures, due in large part to natural boundaries of the Elburz and Zagaros mountain ranges (Ghirshman 1964).

A main characteristic of Amlash pottery is its intricate sculptural detail and technical manufacture, a testament to their socio-religious ethos. Representations of animal figures are abundant in Amlash pottery and are usually depictions of common animals to that region, namely ram, ox, horse, stag, boar, and ibex. Human representations are also common, but are usually included in burial sites and may represent either deities or human individuals. Unfortunately, due to the illegal looting of many archaeological sites in Amlash district during the 20th century, very little is known about the exact context of these artifacts. Fortunately, this remarkable cultural tradition shows many similarities with the archaeological site of Marlik Tepe located nearby in the Gohar Rud Valley. Under the direction of Ezat O. Negahban of The Iranian Archaeological Service, the royal necropolis of Marlik was excavated between 1961 and 1962. A total of fifty-three tomb chambers of various sizes were uncovered, yielding a wealth of grave goods that attests to a very affluent and sophisticated cultural complex (Negahban 1996 vols. 1&2). Therefore, the material culture of Marlik exhibits similarities to other regional sites such as Amlash, Hasanlu, Khurvin, and Sialk, indicating a broad zone of interaction during the latter half the second and early first millennium B.C. (Matheson 1979:74).

The site of Tepe Giyan is located north of the modern city of Khorramabad in western Iran. The site was excavated by during the 1930s and revealed an occupation sequence from the 5th millennium B.C. to the 1st millennium B.C. The pottery from this site provides an exceptional range of aesthetic types that have become extremely useful for chronological dating purposes. The Museum's collection can be attributed to the Giyan III sequence, which is noted for its painted wares and tripod vessel shapes. The site appears to have destroyed sometime in the 9th or 8th c. B.C., possibly by an Assyrian assault (Matheson 1979:116). 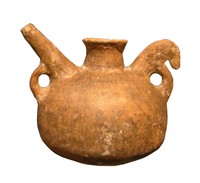 Khurvin is situated about 50 miles northeast of Iran’s modern capital of Tehran. Khurvin was influenced by Mesopotamia and Central Asia because of its location, near migration and trade routes. Agriculture was abundant in this region due to the presence of streams and other water sources from the mountains. Tombs were found in cemeteries similar to Sialk but here there was a lack of weaponry, which may indicate that there was more of an emphasis on farming and herding than warefare. Pottery was found in abundance in the tombs excavated at Khurvin. Unfortunately, there are several graves that were robbed and the findings are being sold illegally. The ornamentation on the pots is minimal but the long neck spouts are similar in form to Amlash, Hassanlu, Marlik, and Sialk pottery. 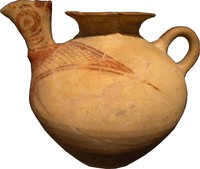 Sialk is situated in the modern city of Kashan. By the 10th century B.C., it was apparent that there was already a structured social system in Sialk through burial evidence. Prior to this period, graves were found in the floors of houses but now graves are found buried in hills with several graves grouped together. The graves of the rich are more tomb-like and confirm the presence of gold and silver in the form of jewelry and pins. Also at this time, copper and bronze weapons were being made in mass quantities and were included in burials, but pottery were the most abundant objects found in graves.

Large jugs are most commonly found grave goods. The decoration is a balance between geometric designs of natural elements or designs of animals. Vegetation and human figures were rarely depicted on pottery designs at Sialk. The representation of a bird is considered to be associated with funerary rituals, as it is commonly shown on libation vases. Rams are also typically found on Sialk pottery and can be identified by the exaggerated emphasis and curvature of the horns. The skill of the pottery is shown through the delicate shapes and forms as well as the elaborate designs that make Sialk pottery so unique. Most of the artifacts from Sialk are now in the Louvre Museum in Paris and the Tehran Museum in Iran.

Hasanlu is located on the northwestern border of modern Iran. Animal and human pottery representations are found primarily in grave sites at Hasanlu. The function associated with most funerary pottery is thought to have been for libation in burial rituals. The artifact shown below has a typical raised design around the top half of the piece, a common characteristic found in pottery from this area.

The province of Luristan is located in western Iran, a region known for its early utilization of copper and bronze technology during the second and first millennium B.C. The pottery from this region shares distinctive qualities of painted geometric design. Unfortunatly, there is very little information associated with much of the material culture designated as coming from Luristan. As a result, these artifacts may be compared with known vessel types that were systematically excavated, such as Tepe Giyan or Tepe Sialk. Moreover, because they are complete vessels suggests that they were probably burial accoutrements.

Beginning in the seventh century A.D., the Islamic Empire dramatically spread out of the Arabian Peninsula reaching as far as Spain to the west and Indonesia to the east. The Arab conquerors of the 7th and 8th centuries A.D. adopted and adapted to the artistic traditions in the areas they conquered, such as the geographic region of modern Iran. One significant influence of Islamic theology was experienced in the realm of artistic expression. Belief in a single creator, Allah, would eventually prohibit the artistic use of anything that might become an idol or indicate that the artist was attempting to duplicate the work of the creator. As a result, artistic restrictions resulted in the development of alternative art forms most notable of which are the Arabesque and Persian styles.

In the Old Persian Empire during the 7th century, the influx of Arab Muslims encountered a fully developed civilization with deep artistic traditions. The Arabs soon adapted to these traditions and eventually incorporated it into their own artistic form. Continued expansion of Arabian influences into eastern Asia resulted in large-scale trade of information and technology between China and the Mediterranean, along what is known as the Silk Road. As a result of increased transferrable wealth crossing vast distances, a powerful group of nomadic horsemen from the Mongolian Steppe consolidated their hostile ambitions over a vast territory of Central Asia. Despite the destructive tactics waged by these Mongol groups, their conquest acted to perpetuate the Persian style by disseminating such goods over great distances. Over time, many Mongol administrators joined the Fatamid sect of Islam, which was more tolerant in using human and animal forms in two-dimensional art, particularly glazed ceramics. The resulting Islamic ceramics of the Persian Style cover a wide range of glaze types and decorative techniques. Common Persian glazes include turquoise, lapis lazuli blue, cream, and clear. Some glazes are applied in several layers over painted floral or bird designs. The different decorative patterns show a variety of styles produced in the ceramic industries of particular cities such as Kashan, Nishapur, Raqqa, Rayy, Samarra, and Samarqand.

Around the ninth century A.D., Nishapaur became an important political center and capital of the Tahrids dynasty. The city is located in the northeast Korisan region of Iran, along a main artery of the Silk Road, which facilitated in making Nishapur a multiethnic city of diverse cultures and innovative technologies. The pottery from this region is very distinctive with magnificent polychrome wares and glazes of various colors. Some of the most notable pieces from this area include inscriptions of Arabic proverbs. Also common on pottery from Nishapur are representations of stylized animals, mainly birds and abstract floral patterns. Pigments most commonly found painted on pottery from Nishapur are yellow, black, green, and red.

Kashan is a city that known for its lusterware. It is located in central Iran near the city Isfahan. It is believed that Kashan was an important regional city in ancient Iran and was established by the Elamites around 7,000 years ago. Kashan pottery reflects a decorative technique of scratching details into the pottery in addition to complex decorative patterns.

Rayy was built under the Median Empire more than 5,000 years ago and is located near Tehran in north-central Iran. Rayy ceramics exhibit evidence of the Chinese-inspired pottery technique known as sgraffito. Sgraffito is a technique where two glazes are applied to the pottery and then a design is engraved into the glaze. The main colors used in the decoration are generally green and yellow, and the subjects usually are representations of birds.