The geographical regions of North America are diverse, and so too are the people who adapted to those environments. Tribes that shared a regional domain with access to many of the same resources and environmental constraints would often develop similar technology and artistic decoration. Regional boundaries only show general patterns of similarity; they are not static. Tribes would often move seasonally to take full advantage of natural resources, and those that lived on regional borders would frequently incorporate characteristics of multiple regional styles into their creations. Trade was also influential in maintaining an interchange of ideas across regional groups. It was not uncommon for a Northeastern Ojibwa cradleboard to be traded to a Plains tribe like the Sioux or Cheyenne in exchange for other valued items.

Researchers have used regional distinctions to simplify their discussion of Native styles and design, but not all researchers recognize the same regions. This map was produced by Alfred Kroeber, a well-known anthropologist who is respected for his intensive study of American Indian cultures. The culture areas represented – Arctic, Sub-Arctic, Northeast, Southeast, Plains, Southwest, Great Basin, Plateau, California, and Northwest Coast - are generally recognized standards. Some researchers may add others to recognize more specific stylistic differences (like a Prairie region that would combine the western Northeast and eastern Plains), but few would subtract from these.

When specifically studying cradleboards, regional, tribal, and individual characteristics can be very distinctive. The design components and decorative features are usually all that is required to determine a regional origin for the cradle. Even those tribes that lived on regional borders usually followed a single cradle tradition. 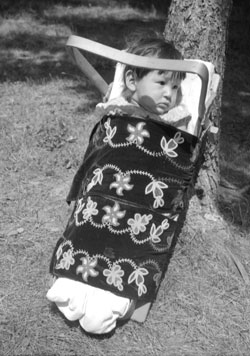 Indigenous cradleboards can be found in a variety of forms throughout North America. In the Northeast and Great Lakes, Native groups used a flat board and decorated cloth or hide wrappers to secure their children. On the Great Plains, tribes usually secured their infants in a hide bag that was often supported by a wooden frame. Among groups of the Great Basin and Southwest, circular wooden frames were covered with a hide sleeve in which the baby was laced. In the Northwest, groups often built trough-like wooden cradles that were lined with bark. Tribes of the Pacific Coast created woven, basket-like cradles.

In addition to the construction of the cradles themselves, the decoration and its application could also vary widely. Some tribes from California wove patterns of diamonds or lines on the cradle’s hood or body, depending on the baby’s gender. Northeastern tribes commonly incorporated floral beadwork or porcupine quill designs on their cradles, while Plains groups generally applied bold geometric designs in beads or quillwork.

While these generalities usually hold true, artists were allowed some freedom to individualize the cradles they created. Contact between different groups often led to the sharing of techniques or materials, the most pronounced example coming with European contact. As commercial goods like trade cloth, glass beads, cotton thread, and cut lumber became more readily available, they were integrated into Native designs. Materials like sinew or porcupine quills were abandoned for more accessible and easily-used materials. As a result, styles of cradleboard construction and ornamentation changed over time. While some aspects of cradleboards can initially appear similar, a great amount of variability actually exists.