Origins of the Cudahy-Massee Expedition, 1928-29 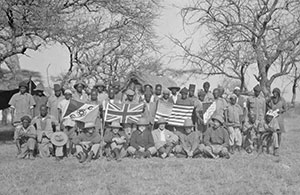 The Cudahy-Massee Expedition with full staff.

The Cudahy-Massee Expedition was the brainchild of Milwaukee Public Museum director, Dr. Samuel A. Barrett. Barrett wished to broaden the museum’s collections and help foster understanding about life in, what was at the time, British East Africa. Carl Akeley encouraged Barrett to procure specimens from Africa. Akeley, renowned for developing a realistic form of taxidermy and display known as “Milwaukee style,” worked at MPM from 1886-1894 as a taxidermist and sculptor. After his time at the Milwaukee Public Museum, Akeley moved on to the Field Museum in Chicago, Illinois, and later the American Museum of Natural History in New York City. Akeley went on five expeditions to Africa and he actively collected for the African Hall at the American Museum of Natural History. Barrett dubbed Akeley the “dean of African collectors.”

Barrett discussed the idea of an expedition with Carveth Wells, a renowned travel lecturer and safari leader. Wells enthusiastically presented the project to Chicago industrialist, Burt A. Massee. Massee, a Milwaukee native, agreed to help fund the expedition. In addition, John Cudahy, a Milwaukee-based businessman, expressed interest in not only funding the expedition but also participating. The whole plan was laid before the museum’s Board of Trustees and approved in 1925. 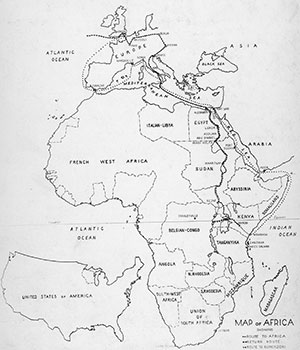 Map of Africa at the time of the expedition with route.

The expedition traveled to British East Africa, which at the time (1928) consisted of the colonies of Kenya and Uganda, and the Tanganyika protectorate (present day Tanzania), acquired from Germany after World War I. Arriving in Nairobi Kenya on July 18, 1928, the expedition went on a ten-week safari to Saronia in the Tanganyika protectorate. The safari then moved to the Mt. Kilimanjaro District, the Cherangani Hills in western Kenya, then to the northern frontier between Guaso, Kenya, and the Nyria River in Abyssinia (present day Ethiopia). From there, the expedition skirted the western foot of Mt. Kenya and the seven forks of the Tana River, then headed back to Nairobi before sailing up the Nile to Europe. In total, the Cudahy-Massee Expedition lasted a bit less than ten months.

Carveth Wells and Osborne Goodrich only remained with the expedition for a short period of time before embarking to Ruwenzori Range (present-day Rwenzori Mountains on the border of Uganda and the Democratic Republic of the Congo) in hopes of seeing glaciers. They returned to Nairobi to meet with the rest of the expedition on September 9, 1928, and Carveth Wells departed for the United States immediately following. John Cudahy left the expedition on August 26, 1928 for a shooting trip in northern and western Kenya. After his return from Ruwenzori, Osborne Goodrich met up with Cudahy. The remainder of the expedition was carried out by Samuel A. Barrett, Irving Perkins, and Owen Gromme.

The Milwaukee Public Museum Cudahy-Massee Expedition collected 1,976 ethnology objects representing over ten different ethnic groups. Natural history specimens include 1,406 birds, 1,056 insects, 312 mammals, and 288 plants, all collected during the Cudahy-Massee Expedition. The mammals are of a very broad range and contain 62 different species, including zebras, lions, hyenas, aardvarks, baboons, jackals, gnus, and giraffes, to name a few. Many of the mounted specimens are currently on exhibit. The history department houses firearms, a camp stove, and a pith helmet used by the expedition. Some of the insects collected include butterflies, moths, beetles, grasshoppers, wasps, bees, ants, and flies.