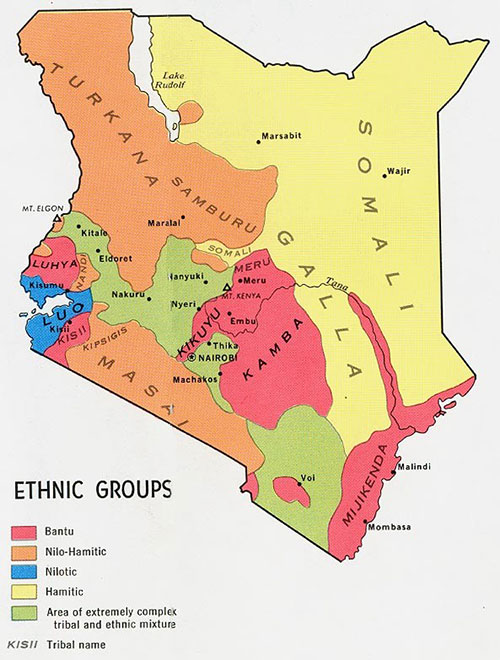 The majority of the ethnographic collection from the Cudahy-Massee Expedition came from the following ethnic groups.

The Embu reside in Kenya on the eastern slopes of Mt. Kenya. Embu is the name of their language and also the name of a city and a district within Kenya. The Embu are an agricultural society, and are closely related to both the Kikuyu and the Mbeere. Approximately 300,000 people are Embu. The Embu are members of GEMA (Gikuyu-Embu-Meru Association) political group.

The Irangi live in central Tanzania near the town of Dodoma. They are also known as the Rangi or Rongo. They are a Bantu-speaking group of approximately 300,000.

African languages consist of four distinct families: Afro-Asiatic, Nilo-Saharan, Khosian, and Niger-Congo. Afro-Asiatic languages, including Semitic, are spoken in North Africa, Arabic being the most common. Nilo-Saharan languages are spoken in a broken chain from the Niger River in West Africa to Ethiopia and the Upper Nile Valley. Nubian languages belong to this group, as does Maasai. Khosian, the “click languages” is a small and nearly extinct family of languages that was once widespread in Africa. It is confined today to pockets of small groups in southern Africa. The Niger-Congo, the largest linguistic group in Africa, includes the “Bantu” languages. Niger-Congo languages are spoken from the fringe of the Sahara Desert to the tip of South Africa.

The Kikuyu are the largest ethnic group in Kenya comprising twenty-two percent of Kenya’s total population. They are also known as the Gikuyu. A Bantu speaking group that came to Kenya during the Bantu migration (500 B.C.), the Kikuyu inhabit the fertile highlands between Mount Kenya and Nairobi. The Kikuyu are agriculturists and herders.

In the past several decades, the Kikuyu have been very well represented in Kenyan politics. The first president of Kenya, Jomo Kenyatta, was Kikuyu, and is viewed as the father of Kenyan independence. Kenyan independence was an arduous undertaking and one of the most familiar representations of this movement was the Mau Mau revolt. Kenya was under a state of emergency from 1952-1960 and detention camps were established to interrogate suspected participants. Almost all the people detained in the camps were Kikuyu. Currently, the Kikuyu have a political alliance with the Embu and Meru groups. They retain strong presence in Kenyan politics. The current president of Kenya, Mwai Kibaki, is Kikuyu.

The Meru live in the northeastern slopes of Mt. Kenya and they are an agricultural society. Meru is a term that actually groups together eight different ethnic groups that include the Tharaka, Chuka, Muthambi, Igembe, Imenti, Igoshi, Mwimbi, and Tigania. The Meru comprise only six percent of Kenya’s total population. Due to their habitation of the region, there is a city in Kenya named after the Meru people. Their language is also called Meru.

In the past, the Meru people were grouped together into one geopolitical district. This changed in 1992 when the Meru District was divided into three geopolitical aggregates: Meru, Nyambene, and Tharaka-Nithi. In terms of politics, Meru have been successful in electing officials and petitioning the government by entering into a coalition, entitled the Gikuyu-Embu-Meru Association (GEMA), with the Kikuyu and Embu. The Meru have been successful in placing members in the government and therefore they are well represented in Kenyan politics.

The Maasai live in northern Tanzania and southern Kenya. They are a pastoral society that is nomadic in nature, as they follow their cattle herds across the Tanzania-Kenyan border. They are the only group of people in these two countries that are allowed free access across the border. The Maasai encompass 16 smaller subdivisions. The exact population of the Maasai people is hard to determine as the Maasai view the census as the government meddling in their lives. Furthermore, the Tanzanian government does not conduct censuses based on ethnicity.

Maasai literally means “speaker of Maa,” which is their language. The Maasai believe that all cattle on the earth belong to them and they have more cattle per person than any other ethnic group in Africa. Agriculture is looked down upon by the Maasai because once the land is tilled it is no longer suitable for grazing. During colonization the Maasai were forcibly relocated to a Southern Reserve, which is still their home. In the past two decades, the Maasai have begun to participate in a market economy with other ethnic groups in Kenya. This has led the once self-sufficient society to rely more heavily on their neighbors.

Upon their travels out of Africa, the expedition sailed up the Nile and collected items from southern and central Sudan. The population of Sudan is split between black Africans and Arabic Africans. Sudan is the largest country in Africa and is approximately the same size as Europe. The official language of Sudan is Arabic. Due to its size and the Nile River, the climate of Sudan varies greatly between north and south. The north is a desert region, while the south is tropical with rain forests and swamps. Central Sudan features steppes and low mountains.

Sudan was a British colony until 1956, when it achieved independence. Since independence, modern Sudan has been plagued by strife. Two civil wars (one in 1972 and one in 1983) caused many Sudanese to be displaced from their home. Currently, Sudan is facing another crisis during which fighting in the Darfur region displaced over four million people and caused over 400,000 deaths (2006 CIA estimate).

The Nandi live in the highlands of western Kenya. They are part of the larger Kalenjin group, which accounts for 12 percent of Kenya’s total population. The Nandi economy subsists on agricultural and cattle rearing. They speak a Nilo-Saharan language and approximately 400,000 people are considered to be Nandi. Kalenjin was not a united ethnicity until World War II, with the hope that uniting would help them achieve independence. However, all of the people who comprise Kalenjin spoke a common language and shared many similar cultural traits. Kalenjin political wants were addressed by the second Kenyan president, Daniel Arap Moi, who was a Kalenjin.

The Mbeere reside in Kenya, east of Mt. Kenya and southwest of the Tana River. They are also known as the Mbe, Mbere, and Emberre. They are closely related to the Embu. They are a Bantu speaking society that relies heavily on agriculture. The Mbeere used to reside within the Embu district until 1996 when they received their own district. The population of the Mbeere district is 170,953.

The Turkana live in the northwest corner of Kenya and the northeast corner of Uganda. Turkana is also a district in Kenya and the name of their language. In Kenya, approximately 300,000 people are Turkana. After the Maasai, they are the second largest pastoral group within Kenya. The Turkana are a nomadic people who follow their herds, which provide the majority of their livelihood. Currently, the Turkana are facing a crisis of land shortage due to a variety of factors. In the 1990s, drought plagued their lands, cattle-raiding by neighboring groups depleted their herds, and former Kenyan president, Daniel Arap Moi, gave oil-drilling concessions to businessmen on Turkana lands.

The Kitosh are part of the larger Luhya group that comprises 14 percent of Kenya’s population. They live in western Kenya and the Luhya group straddle the Kenya-Uganda border. The Luhya are not a homogeneous ethnicity, since they are comprised of 18 subgroups, such as the Kitosh; but all of these groups speak a common language, and they share cultural and ethnic traits. They are primarily agriculturists, but they also keep cattle, sheep, and goats. The Luhya are one of Kenya’s poorest ethnic groups due to fragmented farms too small for commercial farming and reduced cattle herds. This, in turn, has caused many of the Luhya people to migrate to urban areas.

The Ikoma primarily live in the east and northeast sections of Lake Victoria in Tanzania. They also live in a small section of Uganda and western Kenya. They are part of the larger Shashi group and are a Bantu-speaking society. The Ikoma were a hunting society until the early 1950s, when they were forcibly removed from their homes with the founding of Serengeti National Park. After their removal, the Ikoma became farmers. They also raise some cattle and goats.