The introduction of iron metallurgy to the previously bronze-using areas of modern-day Germany occurred around 800 B.C.E. With the fall of Rome in the fifth century C.E., the people of central Europe continued to experiment with metallurgy, but no major technological advances occurred during the Middle Ages in terms of iron tools and weapons. Most of the objects in the Frankfurth collection that are made of iron therefore must be identified on the basis of style, a more useful indicator of date for some types of objects than others. Agricultural tools, for example, changed little if at all from the late La Tène period (pre-Roman Iron Age) to the Industrial Revolution. Before the 15th century C.E., with the introduction of cast iron technology, all iron in Germany would have been produced by forging.

The actual making of these metal objects was the responsibility of the blacksmith in medieval European society. After training and an apprenticeship in metalwork, a blacksmith would have the expertise to make metal objects to service the basic needs of their community. Levels of expertise varied, however, since not all blacksmiths could produce items of a more sophisticated nature. The demand to create metal objects would have been high and required access to ore, a furnace, a constant source of fuel to keep the furnace hot, the tools to forge the metal, and the space for all of these necessities.

Iron ore was available across Germany but the most prolific sites exploited in the Middle Ages are located in the southern regions of Swabia, the Eifel, and Franconia, as well as the Hunsrück Mountains. The ore was retrieved either from underground sources or from bogs before being smelted so that the bloom could be carbonized and forged. After the 15th century, cast iron was poured into molds for everything from keys and horseshoes to axe heads and swords. The metal was then forged from separate pieces of iron by hammering into the more distinct forms needed and then allowed to cool.

The furnaces for smelting changed in shape and size over the years. Some used water power to achieve the consistent flow of air needed to keep the fire going but this was very rare until after the eleventh century. Hand cranks and other means of sustaining the temperature in the furnace were used much earlier by the blacksmiths or their apprentices. Bellows increased in popularity in the thirteenth century, although they were used much earlier in Asia and Africa and were helpful in controlling the temperature of the furnace. 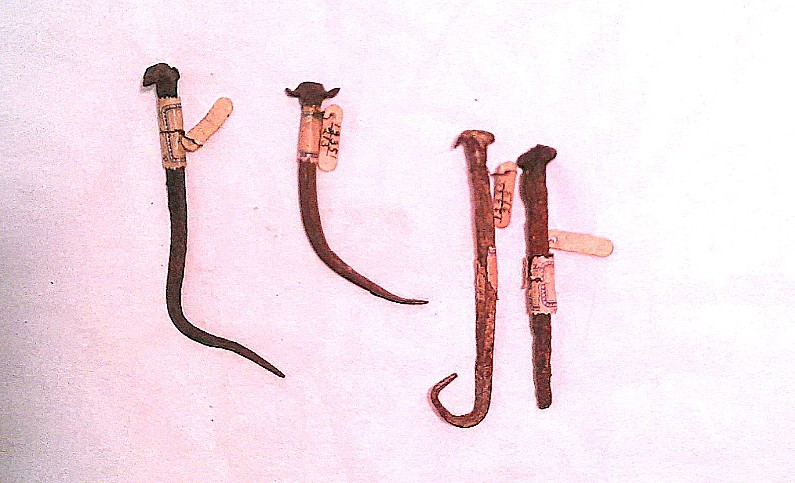 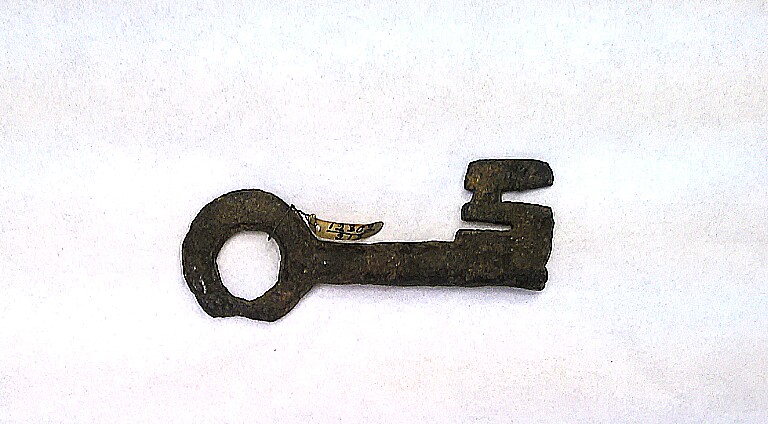 Many objects in the German Medieval Metallurgy Collection were for daily use and some of them tend to be overlooked in museum contexts. Horseshoes, nails, buckles, keys, and even kitchen utensils were essential objects in the everyday lives of medieval Europeans. Nails differed in size but were similar in shape. The characteristic bent nail found in an archaeological context looks similar to the letter ‘J’, indicating that it was used. The nail was a fixture in all aspects of medieval society.

Keys in the collection reflect different time periods as well as changing purposes. At first small and simple, they became more sophisticated as the need grew for more stable security for homes, especially food storage areas and money chests. The iron keys of the collection are primarily for everyday use and are not as ornate as other keys of the time period. These objects, however, help us understand the norm in Central Europe for the common person.

Warfare during the Middle Ages, especially in Germany and northern European countries, has been a subject of much deliberation, study, and fascination by scholars and the general public. The weapons used in battle included axes, swords, blades, and lance heads. In an atmosphere of constant conflict, Germans in the Middle Ages were in need of protection as well as ways to gain territory and establish power.

While lances and halberds were introduced in the Middle Ages after the horse became more prominent on the battlefield, axes, swords, and other bladed weapons never lost relevancy because of their practicality. Medieval fighters typically had a shield, a sword or other bladed weapon, and occasionally an ax and thus were not only well fortified with arms but always well prepared. Also, some weapon types had distinct social and status associations. For example, the sword was seen as a noble weapon and was associated with high social status while the bow and arrows and spears were viewed as lower class weaponry. No matter the class of the individual, all weapons allowed their owners to protect their property or community and were part of the societal bonds between feudal lord and vassal or king and citizen in the reciprocal promise to fight or to defend when called upon to do so.