“Travel makes one modest. You see what a tiny place you occupy in the world.”
- Gustave Flaubert, 19th-century French Novelist

This is how astronomers discover exoplanets. The pebble is the planet; the searchlight is the star. To find an Earth-size planet transiting (passing in front of) a Sun-like star, you have to be able to measure starlight dimming only 80 parts per million, or 0.008 percent. If you find this drop on a repeating cycle, you have uncovered a new exoplanet.

Back in January, NASA announced its Transiting Exoplanet Survey Satellite (TESS) discovered its first Earth-size planet in its star’s habitable zone, or the  “just-right Goldilocks zone.” This region is not too hot nor too cold, but just right for liquid water to exist -- and possibly life.

Called TOI 700d, the planet orbits a cool and small red dwarf star. The system is located just over 100 light years away in the constellation Dorado the Swordfish — a constellation best seen in the southern hemisphere.  The new exoplanet is 20 percent bigger than Earth. It gets almost the same amount of energy from its red dwarf star as we do from our Sun because it orbits much closer — every 37 days. TOI 700d is the latest discovery of a potentially lifelike Earth. There could be millions, if not billions, of these planets throughout the Milky Way galaxy.

As of February 2020, TESS has identified about 1,660 candidate exoplanets, of which 38 have been confirmed so far. TESS is exploring the entire sky over the course of its two-year mission. 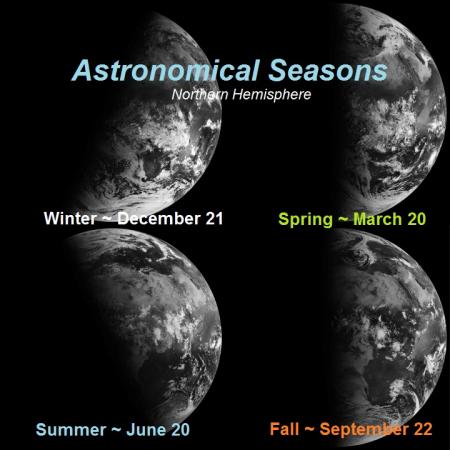 The starts for astronomical seasons are chaotic.

This year, spring starts on March 19 at 10:50 p.m. CDT, Wisconsin’s earliest vernal equinox since 1896! Due to time zones, it will be the first time since then that the entire United States begins spring on March 19.

For the next three years, the first day of spring will move back to March 20. Spring won’t start on March 21 in the Central timezone until the year 2103.

Astronomical seasons are determined on the Earth’s tilted orbit around the Sun. At the equinoxes, the Sun shines directly over the Earth’s equator and everyone experiences around 12 hours of day and 12 hours of night. During the June and December solstices, the Earth is tilted by 23.5° toward or away from the Sun, depending on which hemisphere you live in, southern or northern. 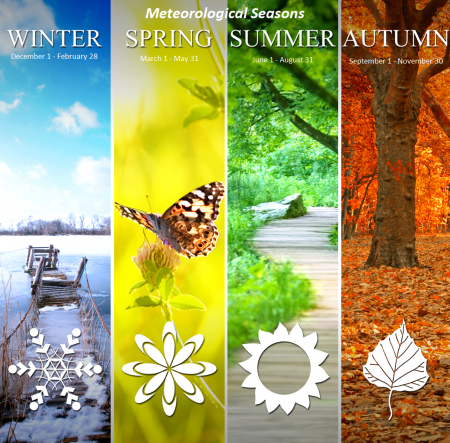 Meteorologically, the beginning of spring is March 1. This method began because it is easier for weather measurers to compare seasonal and monthly records over the years. These starting points make sense to us naturally, and we are comforted by seasonal starts that don’t change.

Of course, nothing happens to us, specifically, on either March 1 or March 19. However, if it’s a sunny day on the equinox, and you are driving east around sunrise -- or west at sunset -- the Sun’s blinding light may slow you down. This is because the Sun rises directly east and sets directly west on the equinoxes (and many streets are aligned north-south and east-west). 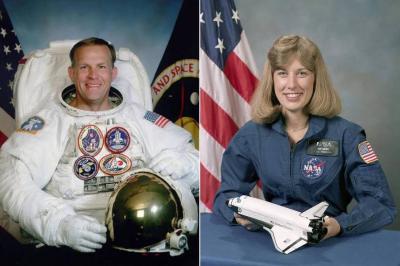 During the recent Valentine’s program at the Planetarium, we did a little segment on a couple that flew in space in 1992, the only one so far. Jan Davis and Mark Lee were both astronauts with NASA -- and husband and wife! They married shortly before their mission and it was too late for NASA to change their assignments. NASA now forbids couples from flying together in space.

With space tourism heating up again, will this romantic part of space travel make future news?

In 2021, Elon Musk’s Space X Corporation is partnering with tourism company Space Adventures to fly up to four people at a time on a five-day trip in Crew Dragon capsule. Details are sketchy and many hurdles remain. Forecasters think 2022 or 2023 might be more practical. The price tag is estimated at over $50 million per person, or 100 million per couple, if any will be allowed. 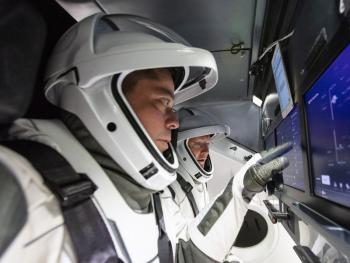 Space X is scheduled to NASA astronauts Bob Behnken and Doug Hurley very soon — May 7, 2020. Last year, they completed an uncrewed test flight to the space station. Many think that day will get pushed back. America has not launched its own astronauts into space since the last space shuttle mission back in July 2011.

Russia's space agency Roscosmos is also working with Space Adventures to fly two passengers to the International Space Station in 2021. And unlike past space tourists, these two passengers will fly together. Again, there is no mention whether a couple will be allowed or not.

Russia launched seven space tourists between 2001 and 2009. One with deep pockets flew twice. Charles Simonyi, an American businessman of Hungarian descent, flew to the International Space Station in 2007 and 2009. Back then, a space excursions cost about $20 to $25 million dollars. 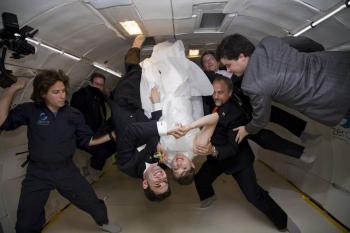 The picture sure looks like the couple was married in space. They were weightless, but still in Earth’s atmosphere. In 2009, Noah Fulmor and Erin Finnegan wanted to be official space tourists but had to settle for a Zero-Gravity Corporation airplane ride. You could say they were “heels-over-head” for each other.

They flew on a modified 727, sometimes referred to as a "Vomit Comet." Passengers are able to free fall for about 30 seconds at a time as the plane follows its parabolic track. An actual space tourist, Richard Garriott, who flew on the ISS in 2008, was the master of ceremonies for the high flying lovers. 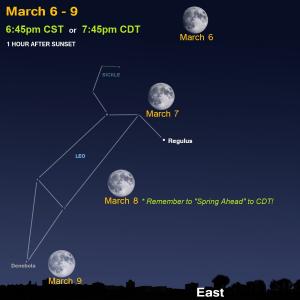 “In like a lion…” is an expression to mark March and the start of spring. Spot Leo’s head, the “backwards question mark,” or “sickle,” in the east shortly after sunset. The full Moon nears the star Denebola, the tip of Leo’s tail on Sunday night, March 9—which is also the day we “spring ahead” with our clocks to daylight savings time. 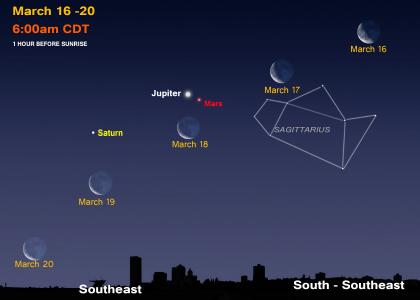 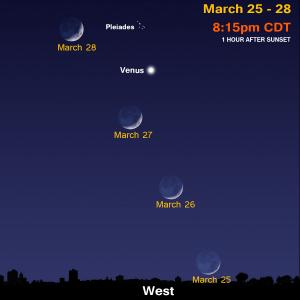 Venus sets four hours after the Sun. The unmistakable beacon shines almost halfway up in the western sky. The hottest planet nears the glittering Pleiades star cluster near the end of the month. A crescent Moon gives Venus some competition on March 27-28. 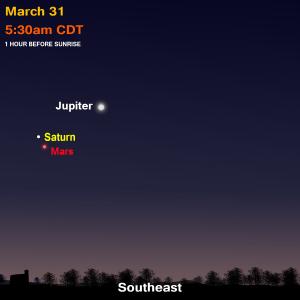 By March 31, Mars will have left massive Jupiter and now nears slowpoke Saturn (30-year orbit). Saturn and Mars shine near the same brightness, and only a few stars can outshine them.