Description and History of Oil Lamps

A lamp is a device that holds and burns fuel, typically oil, as a means of producing light. Although oil lamps have taken on a variety of shapes and sizes throughout history, the basic required components are a wick, fuel, a reservoir for fuel, and an air supply to maintain a flame. 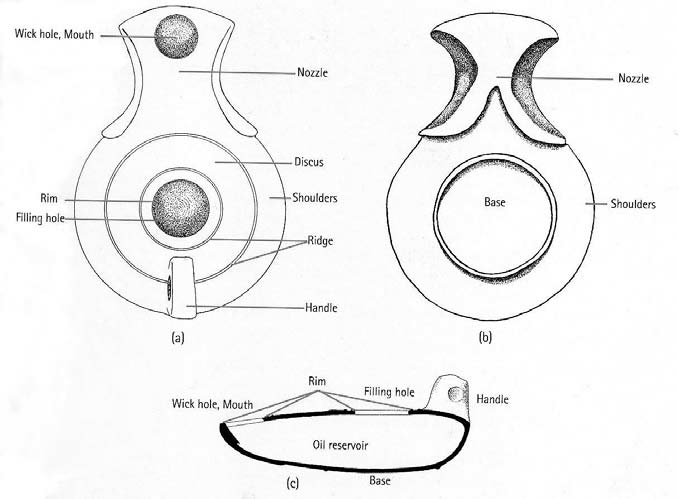 Some of the earliest lamps, dating to the Upper Paleolithic, were stones with depressions in which animal fats were likely burned as a source of light. Shells, such as conch or oyster, were also employed as lamps, and even may have served as the prototype for early lamp forms.

Clay lamps appeared during the Bronze Age around the 16th century BC and were ubiquitous throughout the Roman Empire. Initially, they took the form of a saucer with a floating wick. 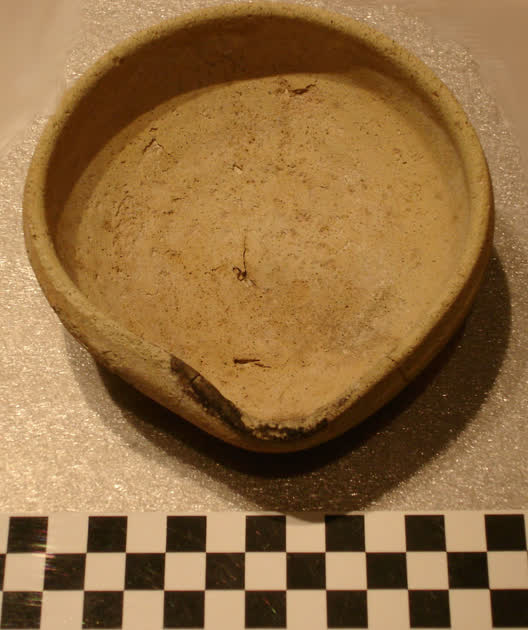 Soon after, these saucers began to develop a pinched or folded rim which resulted in a nozzle and served the purpose of holding the wick in place, thus controlling the flame as well as the smoke. Lamps with folded rims are often referred to as “cocked-hat” lamps. 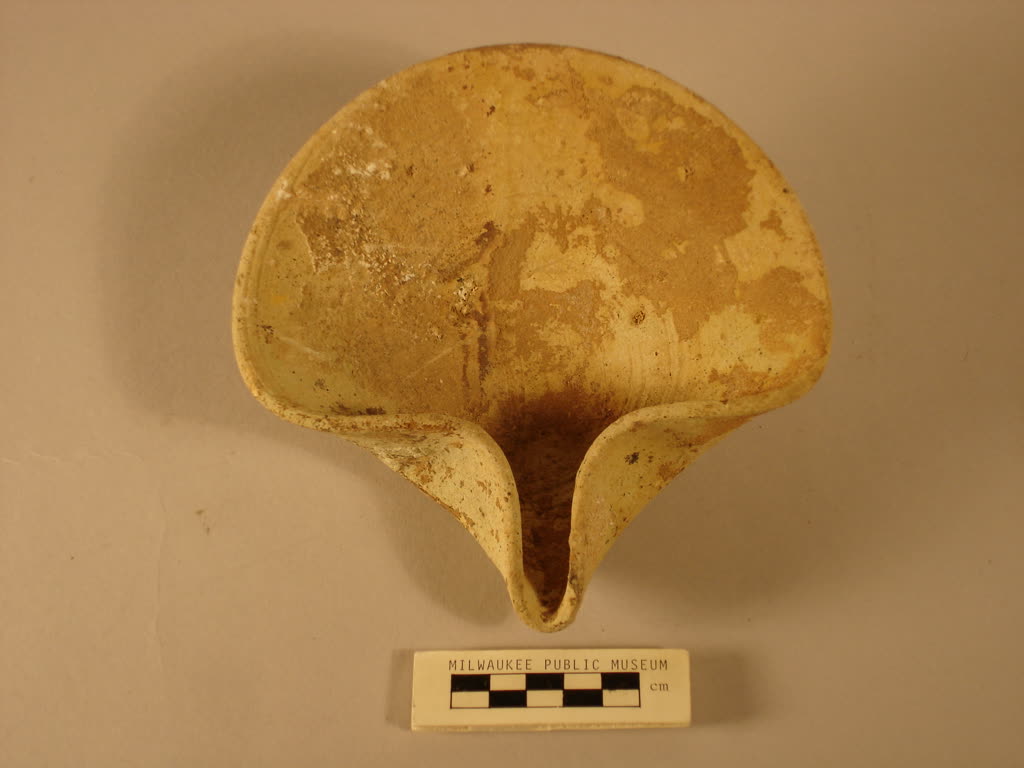 As they evolved, clay lamps became more enclosed, moving from a pinched nozzle to a bridged nozzle, and sporting the addition of a rim. These changes aided in reducing the amount of oil lost through spillage. 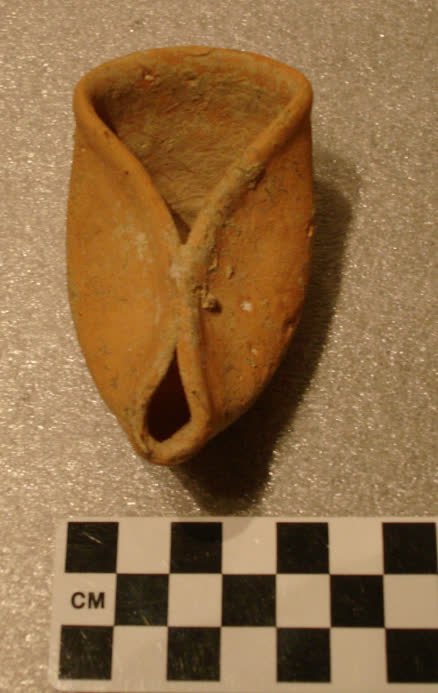 Lamps also began to show signs of experimentation with changes in overall body shape and the addition of multiple nozzles, a handle, and clay slips, a coating that was applied to the outside of clay lamps during production in an effort to prevent oil from seeping through the porous clay. These technological advances have been accredited to the Greeks, whose lamps were exported all over the Mediterranean between the sixth and fourth centuries BC due to their high quality of craftsmanship. 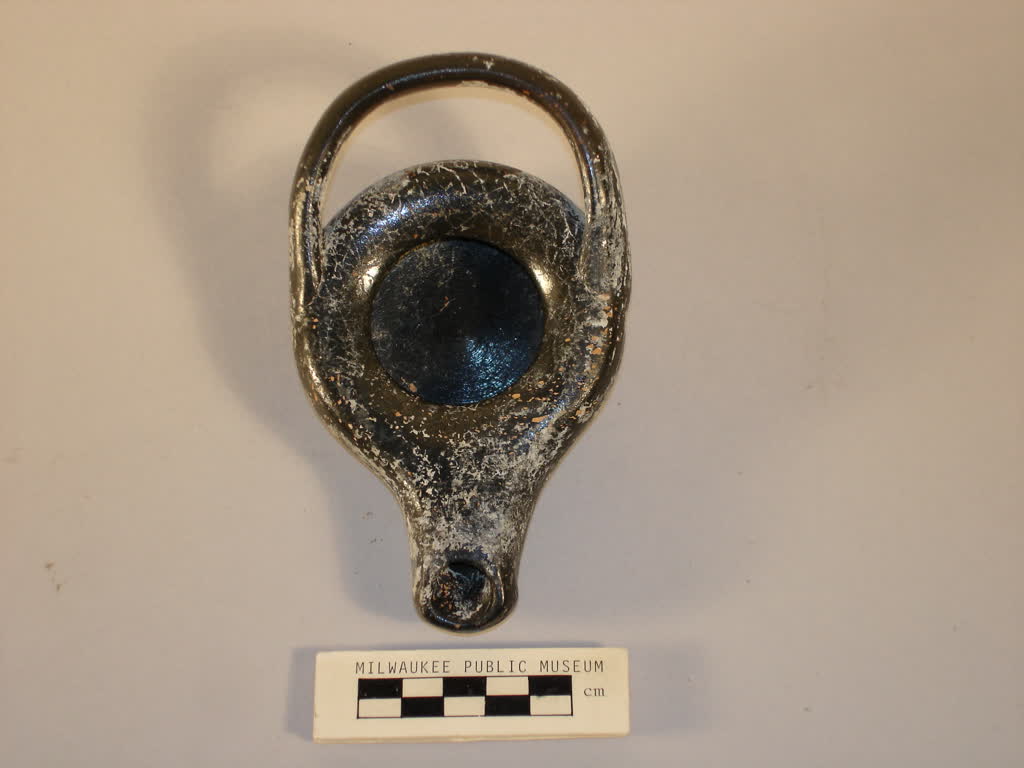 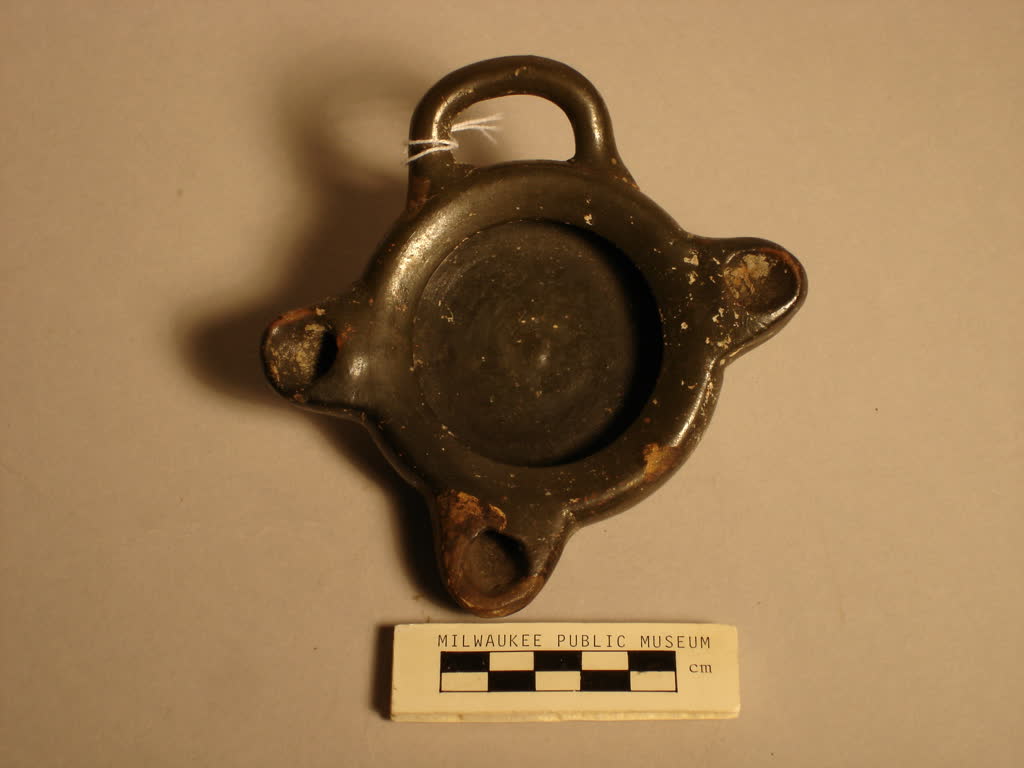 Further enclosure of the lamp body by Roman crafters allowed for more decoration on the discus. They also developed a channel on the nozzle to draw back any oil that dripped from the wick. Between the first and second centuries AD, Italian lamps became the dominant style in the Roman world. 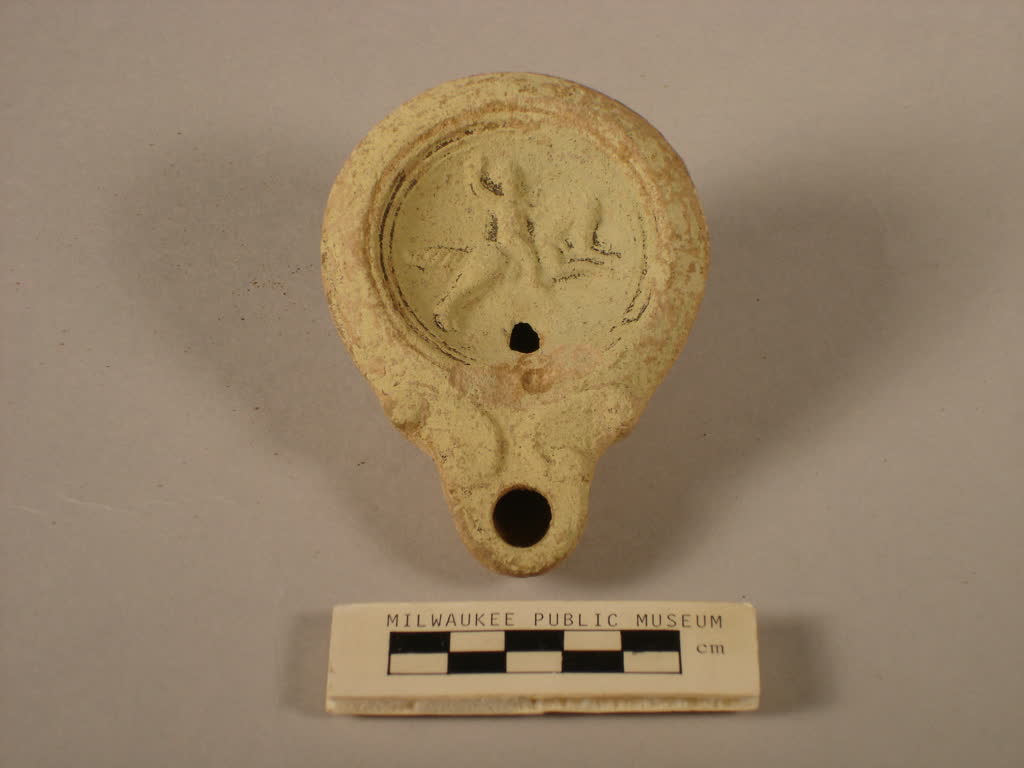 Stone and clay were not the only materials used to make lamps. While stone and clay lamps continued to be produced, glass lamps appeared during the fourth century AD. However, they do not frequently appear in the archaeological record, probably due to the ease with which glass breaks, and there are no examples in the MPM collection.

Advancements in metalworking technology, or metallurgy, allowed for the development of metal lamps, which were popular during the Hellenistic, Roman, and Byzantine periods. 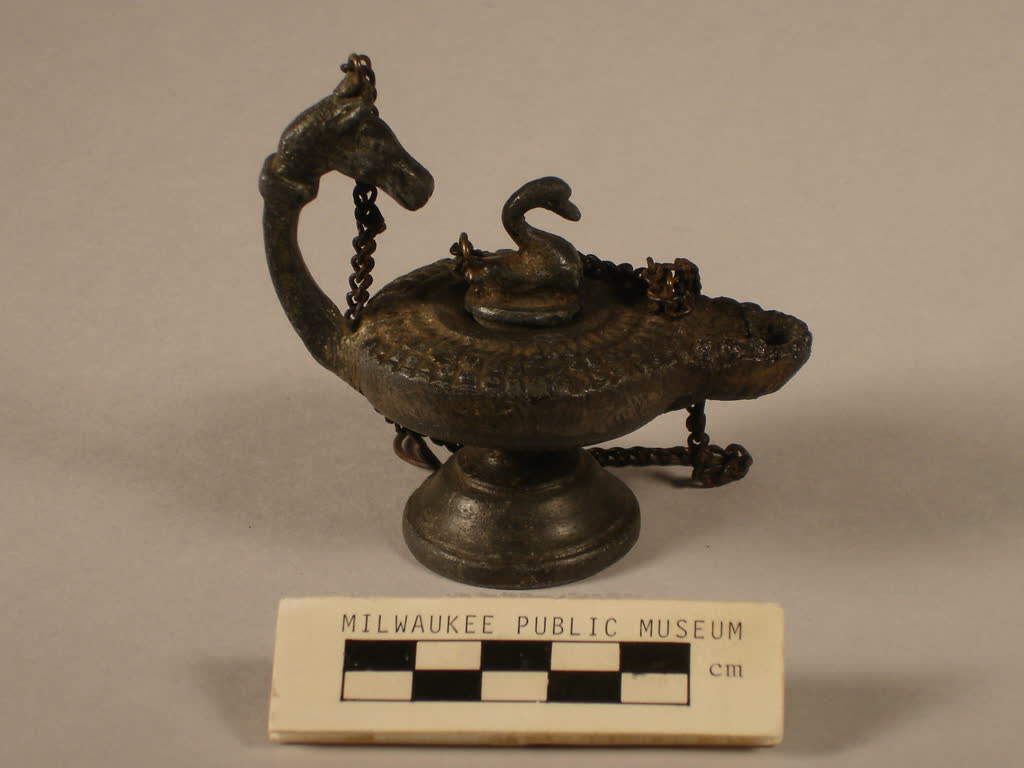 Lamps were used by ancient people in a variety of ways, both indoors and outdoors. They served utilitarian, ritualistic, and symbolic purposes.

Business owners, such as innkeepers and barkeepers, used oil lamps to light their businesses as well as the streets nearby. Noblemen used lamps to light their paths when they or their guests were out after dark. Soldiers used them to light forts and military encampments. Fishermen are believed to have used lamps on their boats when going on nighttime fishing excursions, and when out to sea, galleys likely had oil lamps hanging at the stern to indicate their positions to one another. 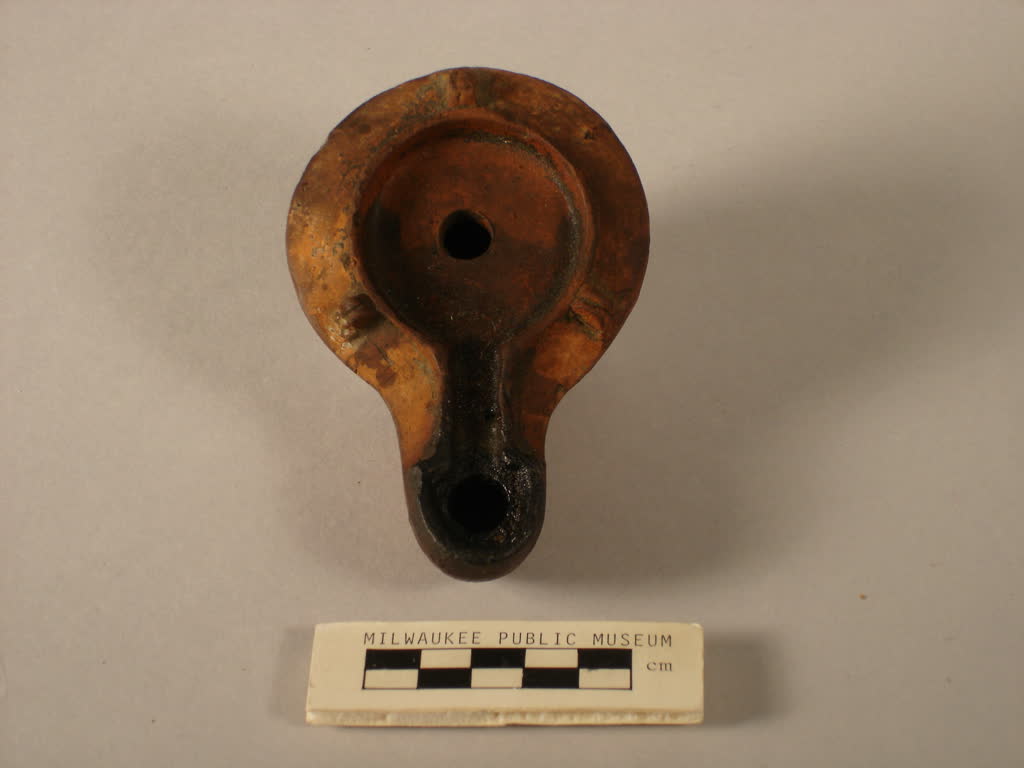 In the entertainment sector, lamps were used to light venues for after-dark sporting events such as gladiator shows. They were also used for “special effects” at the theater to indicate when a scene was supposed to be set at night.

In religious contexts, oil lamps served the simple utilitarian function of lighting temples and shrines, and they served a number of ritualistic functions, as well. Many of the religious practices in ancient Rome involved some form of ritual sacrifice or offering. Because light was considered a blessing, oil lamps were frequently dedicated at temples and shrines as votive offerings. They were also a common component in burial practices, and lamps were often buried with the dead in order to light the way into the afterlife and beyond. 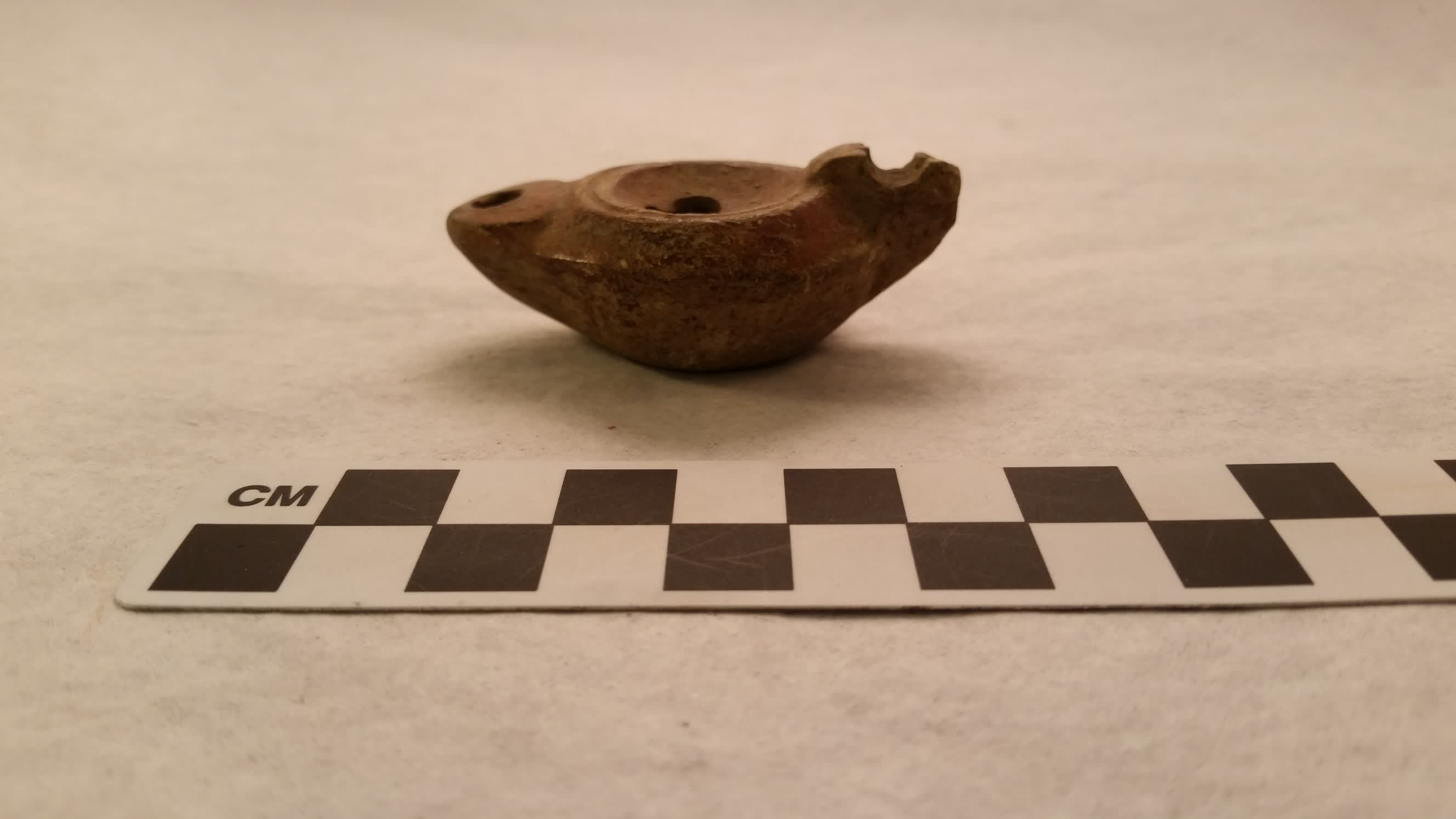 In some cases, oil lamps served as a status symbol. Wealthy families used and displayed lamps made of metal, a higher quality material, lamps with intricate or exotic imagery, and lamps with multiple nozzles which burned more fuel, making the lamp more costly. 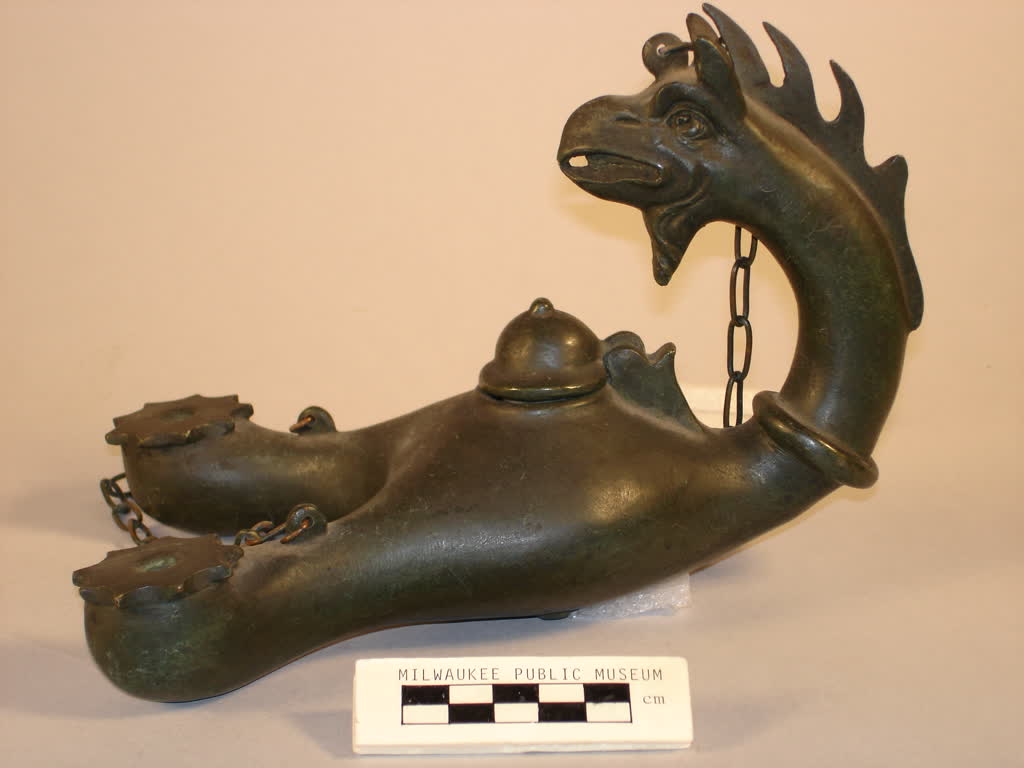 Roman era oil lamps were made of a variety of materials including stone, clay, shell, glass, and metal.

Clay
Clay lamps were manufactured using a number of methods. They could be hand-molded, wheel thrown, or impressed into a mold. Some show signs of being made using a combination of these methods. Clay lamps make up the majority of lamps found in the archaeological record.

Glass
Lamps made of glass were blown and, unlike clay lamps, were capable of holding oil without the risk of seepage. They also projected light more efficiently than lamps of other materials. However, due to the presence of air bubbles, blown glass cannot stand up to the intensity of a direct flame the way clay or metal can. As a result, glass lamps tended to break easily. This may be one reason why they are found less often in the archaeological record.

Metal
Metal lamps were either cast or hammered into a mold, though casting seems to have been the method of choice. Bronze appears to have been the most common metal used, however, lamps of iron, lead, gold, silver, and copper have also been found. Although metal lamps were sturdier, and thus had a longer lifespan than lamps made of other materials, they often did not survive into the modern day. This is likely due to the fact that metal objects, especially those of precious metals such as gold, silver, and copper, were often melted down and reworked into something new.

Fuel and wicks
Besides the vessel itself, oil lamps also require some kind of fuel as well as a wick. Fuel types ranged from animal fat to bees wax to various plant based oils including olive oil, sesame oil, and grape-seed oil. Olive oil is believed to have been the primary source of fuel used in the Mediterranean. Wicks were any kind of fibrous material, typically linen, papyrus, or other plant fibers. 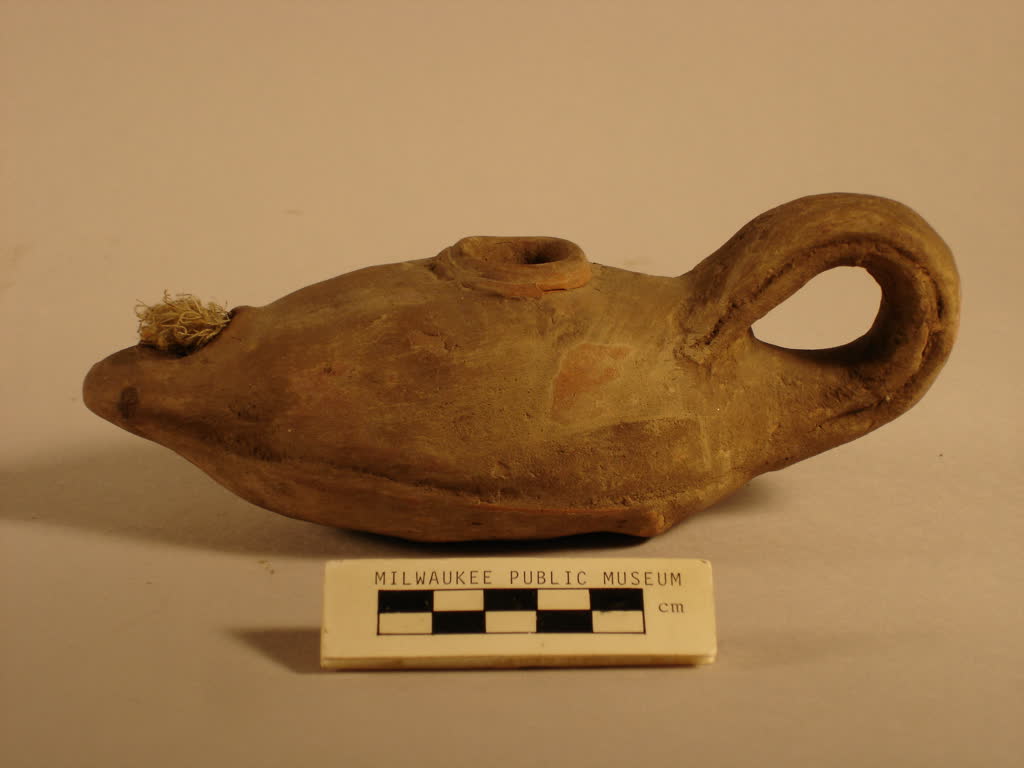 Maker’s marks
A maker’s mark is a word or symbol typically found on the base of an artifact. They are similar to modern brand logos which appear on everything from cars to clothing to food products. In much the same way brand names are used today, maker’s marks were used in ancient times to advertise products of a specific craftsman or workshop to potential buyers. Today, archaeologists can use maker’s marks to trace the origin of artifacts. 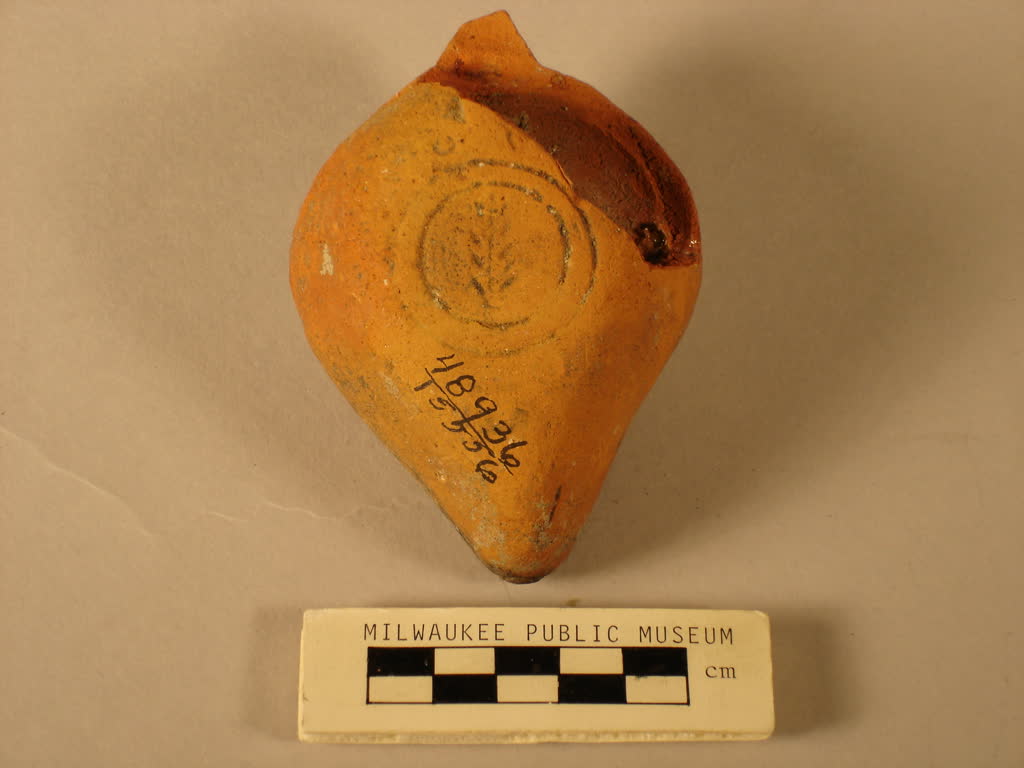 A48936/15556
Leaf and branch maker’s mark on base of Imperial Roman discus lamp. This mark was common on lamps produced in Northern Africa. 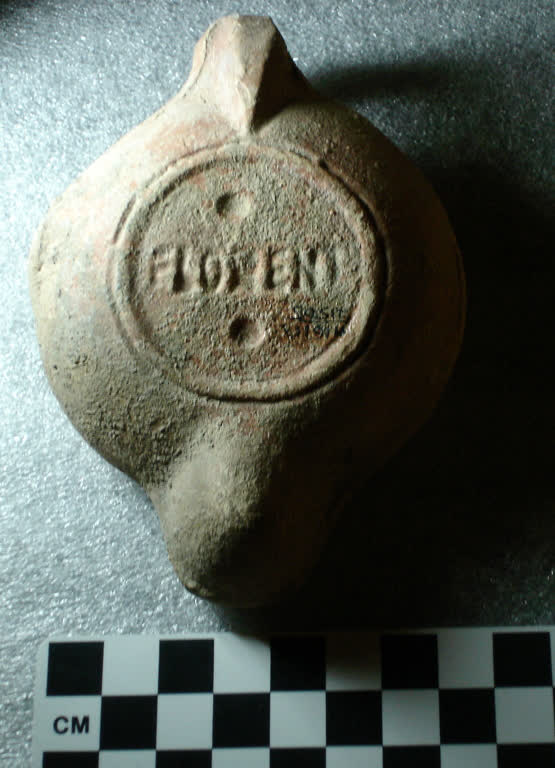 N16113/21500
FLORENT maker’s mark on base of Imperial Roman discus lamp. This mark was common on lamps produced in the vicinity of Rome. 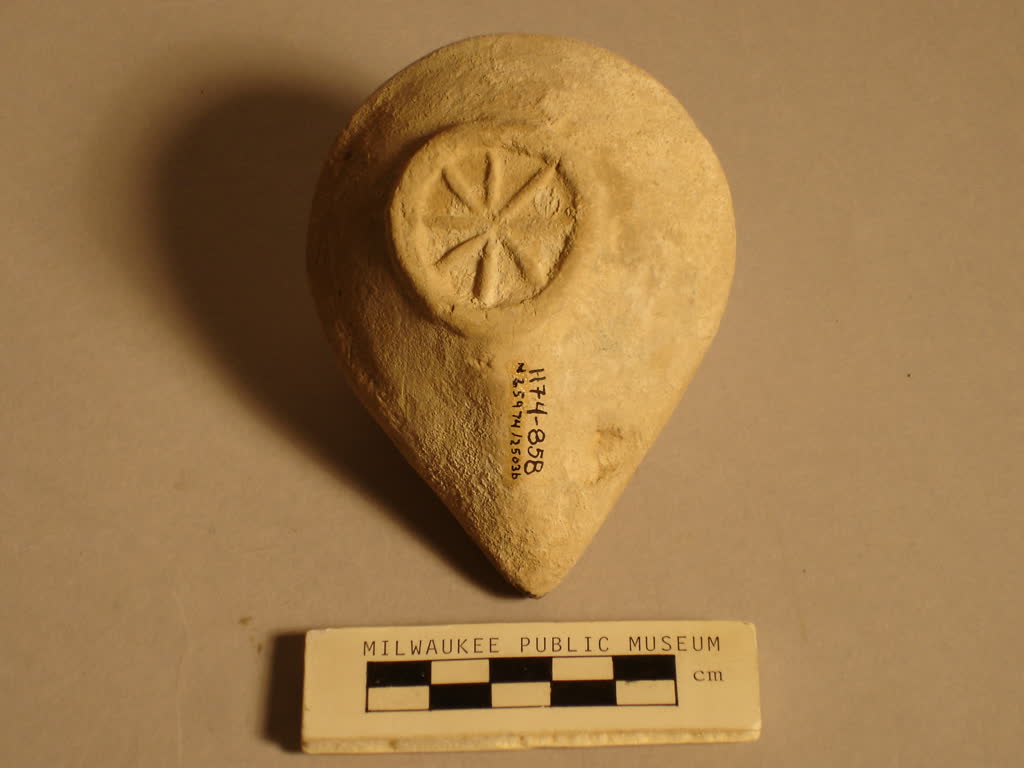 N25974/25036
Eight-spoked wheel maker’s mark on base of Roman Levantine lamp. This mark was common on lamps produced in the Levant.

One of the more prolific maker’s marks found on Roman oil lamps was the word FORTIS. This mark was typically impressed into the base of “Factory lamps” that originated in Northern Italy between AD 70 and AD 230. “Factory lamps” are lamps that were produced on a massive scale, much like commercial goods are today, and then exported throughout the Mediterranean and Roman Empire. 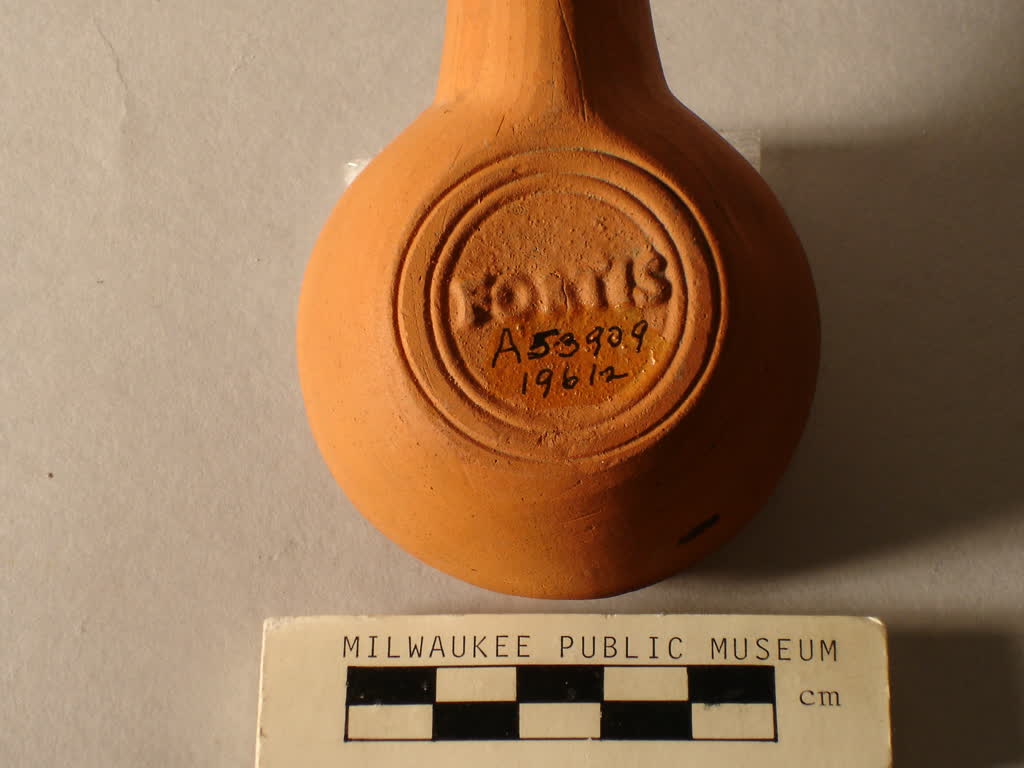 A53909/19612
FORTIS maker’s mark on base of reproduction Roman “factory lamp.” This mark was common on “Factory lamps” produced in Northern Italy.

Iconography is the images and symbols appearing on artifacts and works of art, as well as the study of those images. It reflects the social identity of a culture and can be a useful tool when studying people of a particular region or time period.

The use of iconography by artists and craftsmen can be attributed to many factors, for instance, the desire to spread ideas, to make a statement, or to beautify a work.

Throughout history, iconographic imagery appeared in a variety of contexts including frescoes, paintings, metal works, and ceramics. Oil lamps were no exception. Lamp iconography in the Mediterranean covered a wide range of topics such as religion, nature, sports, entertainment, and erotica. 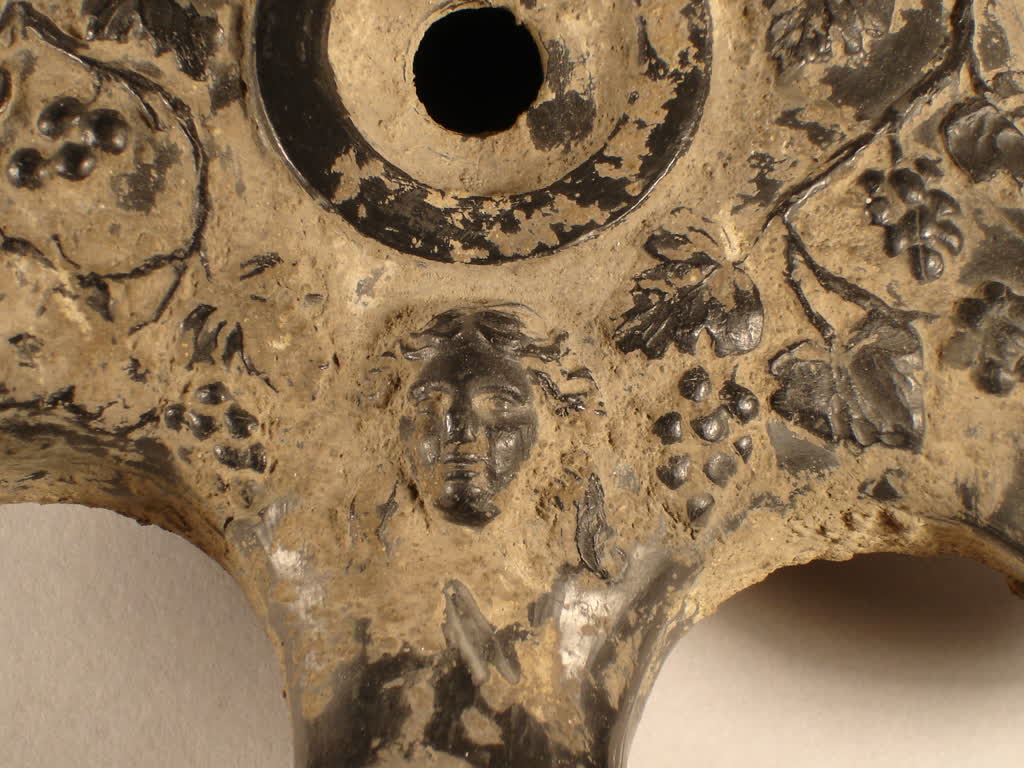 E21337/4970
Roman tri-nozzle lamp decorated with images of grapes, vines, and a human head, possibly that of Bacchus, the Roman god of wine. 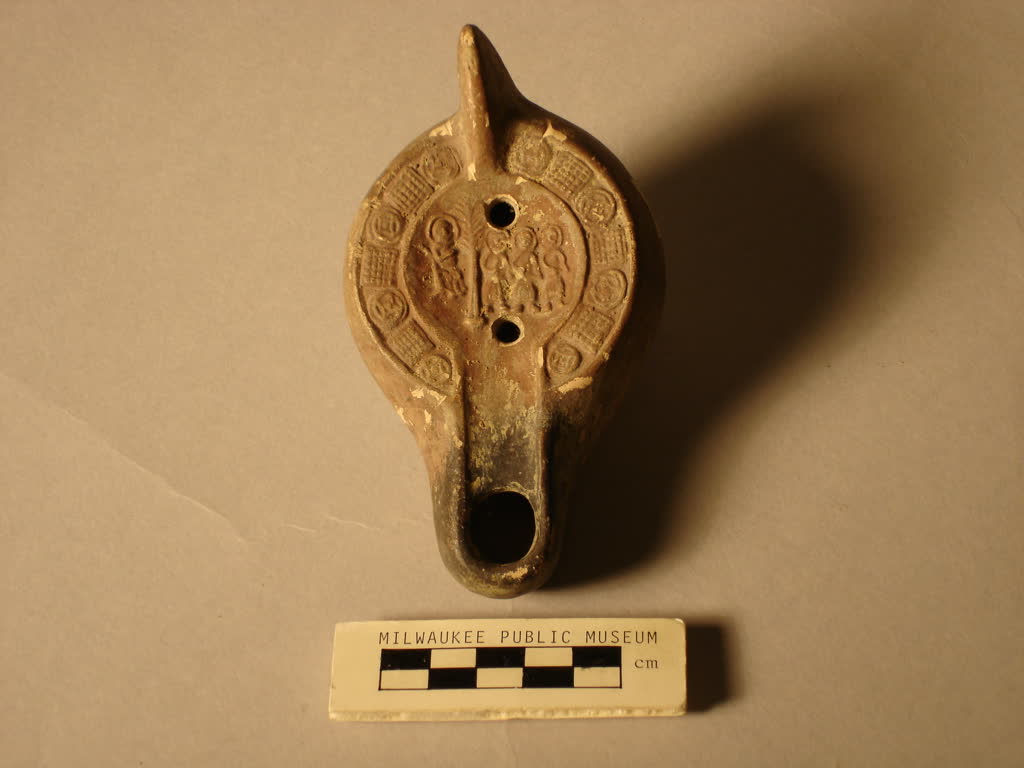 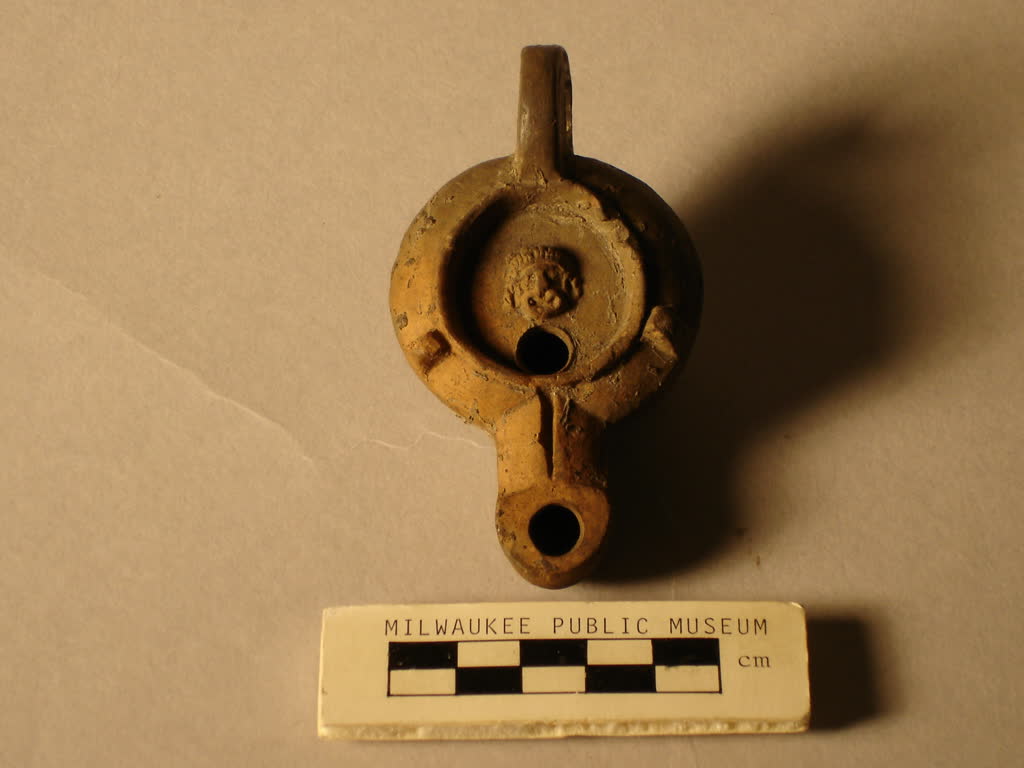 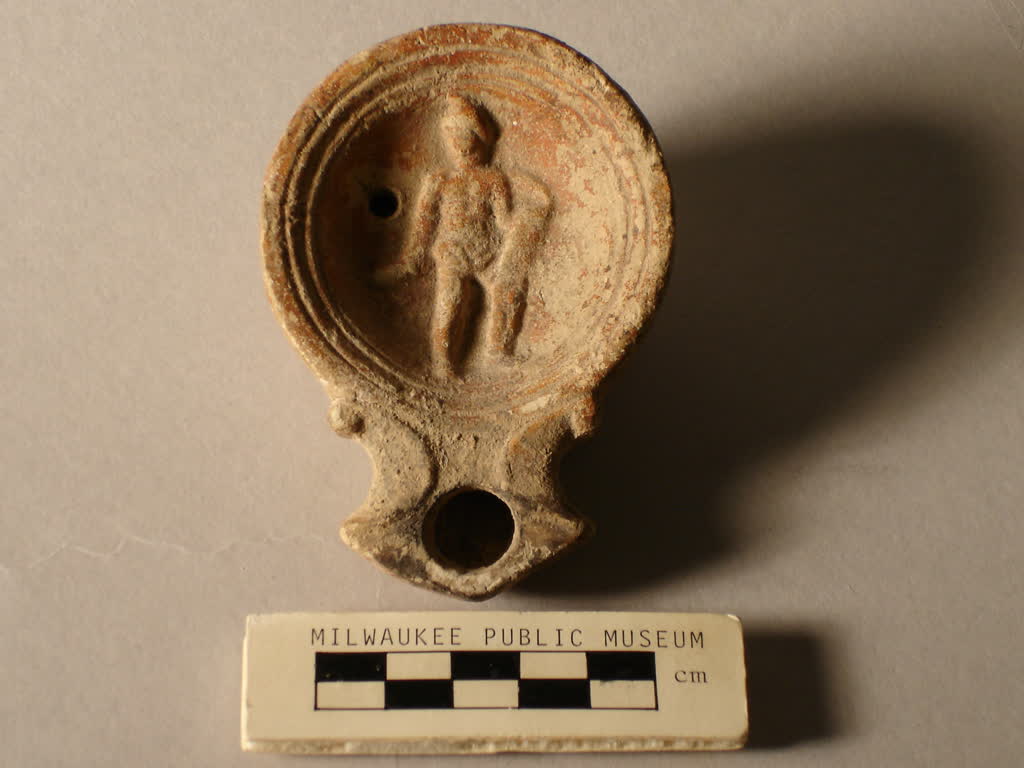