Over the past century and a half the discovery of thousands of copper artifacts, primarily on Wisconsin soil, has given rise to speculation and interpretation of their manufacture and function.

Many of these artifacts leave little doubt as to their probable function, but others are not so well understood. The Old Copper Collection at the MPM constitutes the entire range of known artifact types. 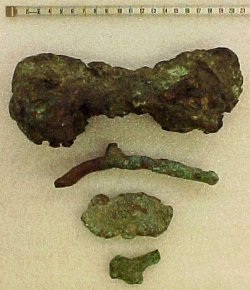 This type of copper has been found in scattered pockets as far south as southern Illinois, as the result of advancing glaciers during the Pleistocene. As these glaciers scoured the landscape of the Keweenaw Peninsula, they picked up exposed copper nodules that range from a few inches to several feet in length. These nodules were eventually deposited in the glacial outwash hundreds of miles from their original source. It was undoubtedly from these pieces of metal that much of the artifacts from the Old Copper Complex were manufactured. Here are examples of float copper found in Wisconsin, as well as some examples of nodules hammered into modified pre-forms. Great Lakes native copper is typically more than 95% pure. 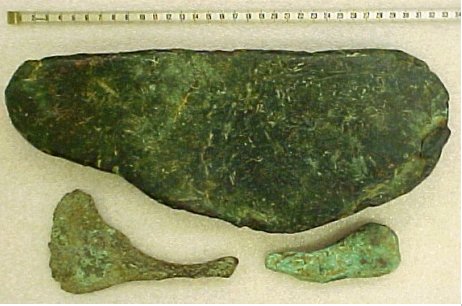 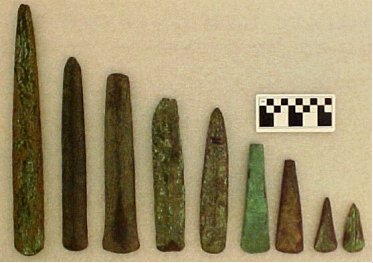 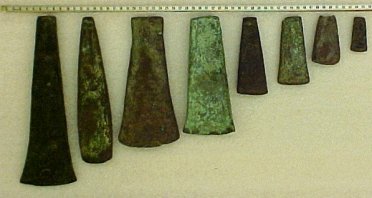 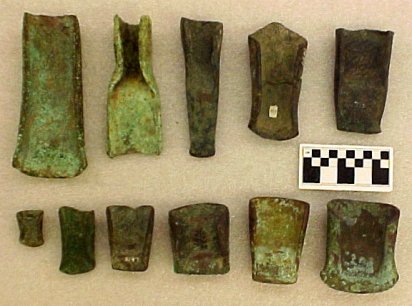 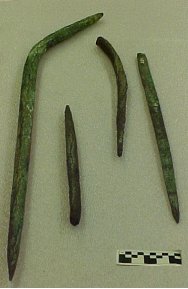 Pikes range widely in size; indeed the largest found in Wisconsin is shown here and measures 75 centimeters in length. The majority of these artifacts are pointed on both ends, though some are blunted. The primary function of the pike was for puncturing or piercing purposes, perhaps for breaking through ice for winter fishing (Penman 1977:19).(Left to Right: 40301/1083(75cm), 40301/1083, 2173, 2183, 2184 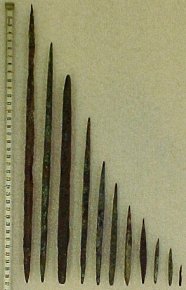 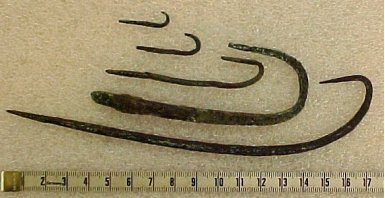 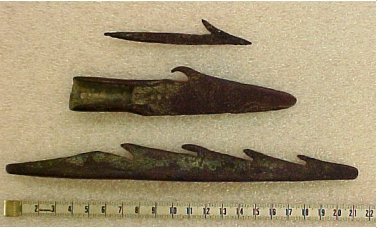 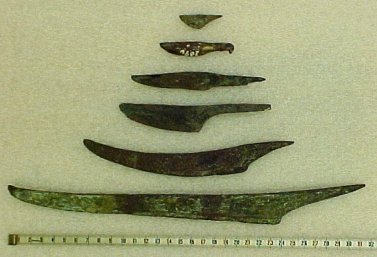 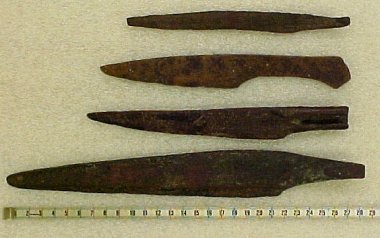 Knives come in a variety of shapes and sizes. There are about 100 knives in the MPM collection, and they range from 4 to 32 centimeters in length. They would have been hafted onto a handle and used for cutting meat or plant material. As these tools became dull, it is likely they were resharpened and used in food processing. 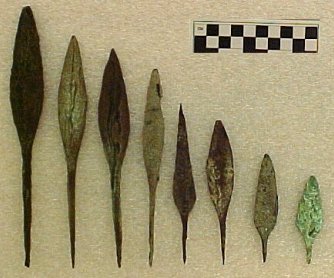 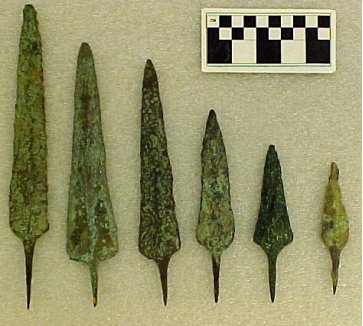 This type of spearpoint is common and may have been contemporaneous with rat-tail points. Currently there are roughly 100 different stemmed points in the MPM collection. These range from around 5 to over 25 centimeters in length. The stem of these projectiles would have been inserted into a wooden shaft and likely reinforced with wrapped cord or sinew. (Left to Right: 1908, 15730/9394, 1910,1911, 11786/1571, 11577/1487) 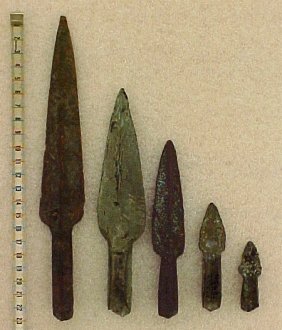 Socketed-tang points are one of the more common projectile points produced in the Old Copper Complex. Currently there are over 300 examples in the MPM collection. Depending on their size, these projectiles would have functioned either as spear points or atlatl dart tips. The socket would have been hafted to a wooden shaft and likely secured with a cord wrapped around it. Some sockets have evidence of rivet holes, for better securing the projectile to the shaft with a copper pin/nail. Typically they have a ridge running along the dorsal surface, which would have added extra stability to the projectile. They range in size from a few centimeters to over 20 centimeters. (Left to Right: 15604/4394, 11909/1669, 11511/1487, 34559/9543, 11505/1487) 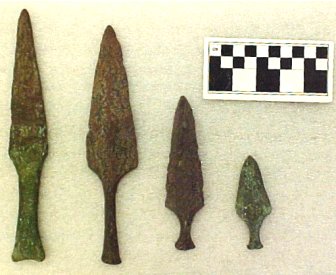 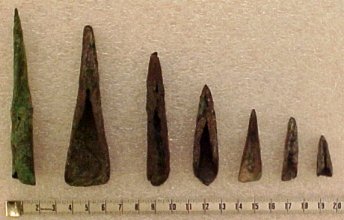 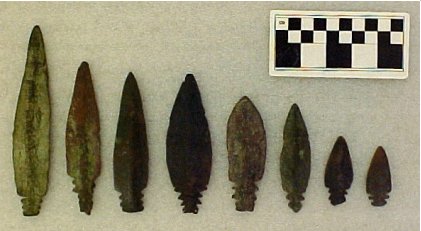 These types of copper projectile points are not very common, however they typically exhibit a uniform shape. The variance on hafting techniques is indicative of different forms of innovation most likely the result of unrelated cultural groups. These spearpoints are fine examples of technological ingenuity during the Old Copper Complex of the late Archaic period. (Left to Right: 30361/8175, 11744/1487) 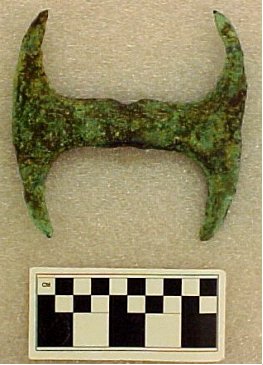 This type of artifact is quite rare and few have been found throughout the Great Lakes. Because of their resemblance to stone examples, it is believed that these implements would have functioned as an atlatl weight, similar to banner stones of the same size and shape. This example (43402/11996) measures 13 x 12.5 x 1.6 centimeters and was discovered with a cache of 20 other copper artifacts in Fond du Lac, Wisconsin during the construction of a sewer trench in 1916. 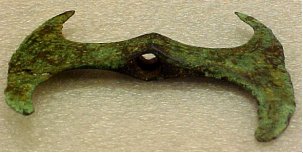 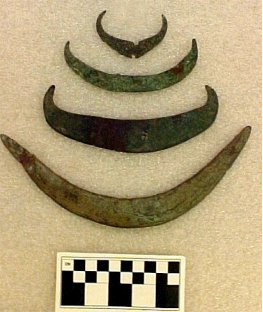 The exact function of crescent-shaped objects has generated numerous debates as to their specific purpose; some believe that they may have been used as cutting tools, while others argue they were more likely worn as ornaments around the neck. Crescents come in various shapes and sizes and generally have blunt edges, suggesting that they may not have been used as cutting implements. 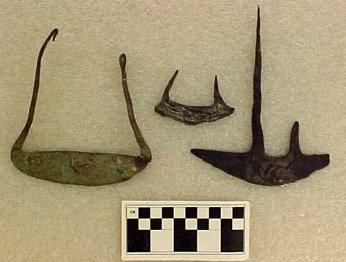 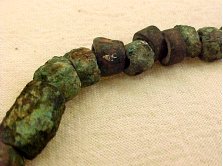 It is hypothesized that beaded necklaces were produced more frequently in the later Archaic period (ca. 1,500 BC) as signs of wealth. While beads are commonly found, whole necklaces are rare. These copper beads are typically rolled into different cylindrical lengths and then would have been threaded with an organic fibrous cord. The following are two fine examples of copper necklaces found in the Milwaukee area. 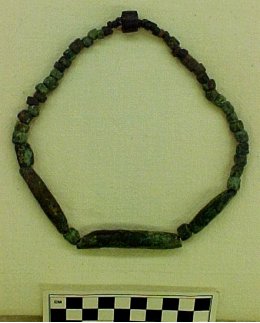 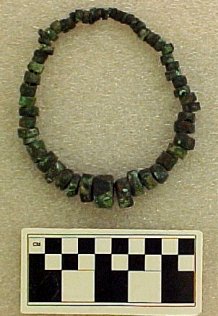 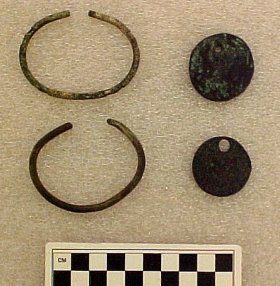 Other examples of personal ornaments include bracelets and pendants. Bracelets/bangles would have been worn around the wrist or ankles, while pendants would have been attached to a cord and worn around the neck. These items may have acted like a talisman or simply worn as decorative jewelry. It is likely that these types of artifacts are late manifestations of the Old Copper tradition, which extended into the proto-historic period. BRACELETS (Top to Bottom: 11721/1487, 11790/1571)