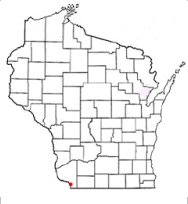 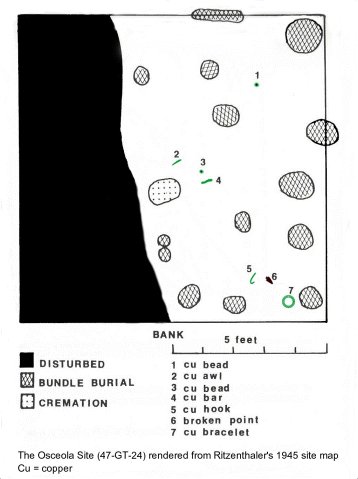 The Osceola Site is located along the Mississippi River shoreline about two miles south of the town of Potosi in Grant County, Wisconsin. In May of 1945, two local fishermen, Ralph Turner and Victor Irish, came across an assemblage of artifacts eroding out of the river embankment. Subsequent investigation by Edwin Goke and John Grindell of Platteville led them to report the site’s significance to the Wisconsin State Historical Museum and the Milwaukee Public Museum. In August of the same year, Robert Ritzenthaler and John Douglas from the Milwaukee Public Museum led an expedition there, in what became the first scientific excavation of an Old Copper Complex site.

The total estimated number of burials at the Osceola site was 500, though prior to excavation many had been disturbed by human impact or natural erosion. These burials invariably consisted of both single and multiple bundle-reburials, with no specific orientation. Furthermore, partial cremation of human remains was noted also. Due to the varying state of preservation and vertical depth it was concluded that the site was in use for a long but undetermined period of time. The material culture from the site generally did not occur in the burials, yet it was found within the same occupation horizon. These included a variety of utilitarian and ornamental copper artifacts, finely crafted chert side-notched projectile points, chert drills and flat smoothing stones.

Therefore, based on the lack of chronometric dates and the absence of any pottery in association with the copper artifacts, the conclusion was that the Osceola Site was occupied sometime during the pre-pottery phase of the Early Woodland Period. This relative date was derived from the poor preservation of skeletal material found at the site, in addition to the heavy patina and corrosion found on the copper artifacts, compared with better-preserved copper implements from the later Mississippian Period (Ritzenthaler 1946:69). Seven years after the Osceola investigations, the first chronometric date on an Old Copper site was obtained from the Oconto Site in eastern Wisconsin. The Oconto date suggested that Old Copper might date as early as 4000 B.C. 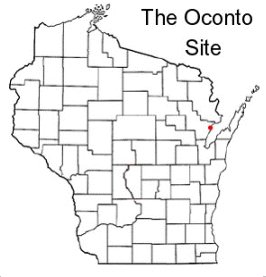 This Old Copper Culture cemetery is located on the outskirts of the town of Oconto in Oconto County, Wisconsin. D. Baldwin discovered the site in 1952, while digging in an abandoned gravel quarry. During that same year an archaeological expedition was launched from the Milwaukee Public Museum led by Dr. Robert E. Ritzenthaler and Warren L. Wittry. In total, 45 individuals were excavated from the cemetery, each occurring in a variety of burial types. The majority of these interments were bundle and flexed burials within pits, some with more than one individual per grave. The Oconto site yielded a total of 26 copper artifacts which included: seven awls, four crescents, three clasps, one socketed-tang point, one fishtail point, one ovoid point, one fishhook, one bracelet, one spiral coiled tubing, one rivet, one spatula, and four small unidentifiable fragments. There was a variety of non-copper artifacts also recovered from the site such as side-notched chert projectile points, shell beads and a unique one whistle associated with a juvenile burial (Ritzenthalar and Wittry 1952). The copper material excavated from the Oconto site is now housed at the Oconto County Historical Society (OCHS) and the Copper Culture Historical Association (CCHA). 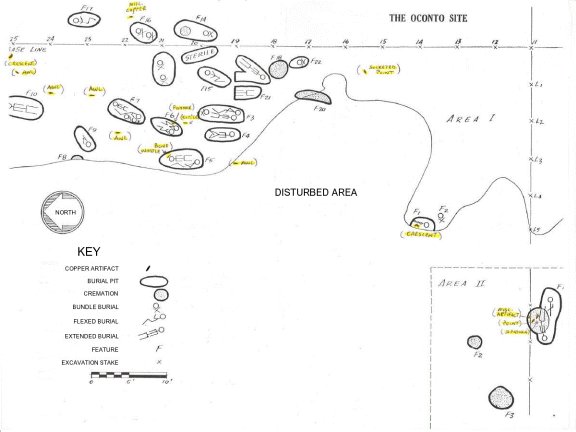 How old is the Oconto site?

In 1953 the first ever radiocarbon date from a prehistoric site in Wisconsin (C-836) was obtained from a carbon sample at the Oconto Site and sent to W.F. Libby (the inventor of C14 dating) at the University of Chicago Institute for Nuclear Studies. The calibrated date came back as 5600 +/- 400 B.P. (Before Present). This early date was a big surprise and its significance quickly made front-page headlines, as it was not only the earliest dated site in Wisconsin but also in eastern North America (Ritzenthalar 1954:3). Subsequent carbon 14 and radiometric dating resulted in a wide range of dates; from 7560 +/- 600 B.P. to 4590 +/- 400 B.P., the latter determined to be the more accurate (Binford 1962, Mason & Mason 1961). However, the most recent AMS (Accelerator Mass Spectrometry) dates from the Oconto Site have confirmed the Middle Archaic occupation: 6020 +/- 60 B.P and 5250 +/- 110 B.P. (Pleger 1998:6582). 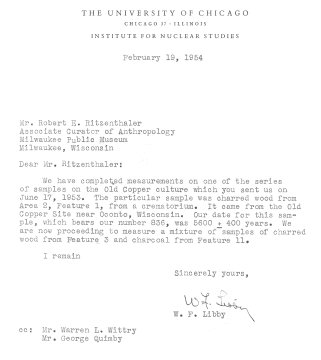 The Original letter from W.F. Libby, regarding the first carbon14 date from the Oconto Site 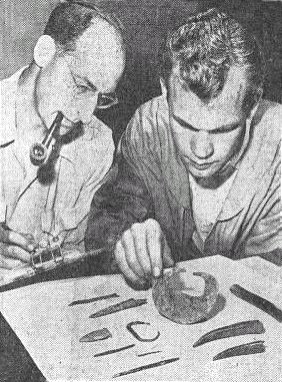