Plains ledger art was adopted as a means of historical representation for the Indian peoples of the Great Plains during the late 19th and early 20th centuries.

Although the Plains Indians had no written language in which to record their history, they did have a long tradition of preserving oral histories pictorially. For centuries, Plains Indian men kept historical records of their tribes, first with petroglyphs and pictographs on rock walls, and then painted on buffalo hides. Historical records as well as individual visions and experiences were also painted on tipis and personal garments. 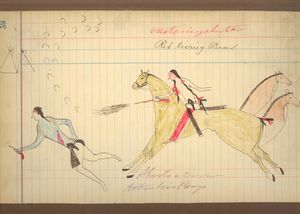 As traders, explorers, and military men pushed further into the Great Plains region beginning in the 1830s, the Plains Indians were exposed to a new medium for their drawings - the ledger book. Used to keep inventories by the white men, the Indians soon adopted the ledger book as a canvas for their own form of historical documentation, often drawing over inventory lists made by the previous owner. The ledger drawings were done in pen, pencil, crayon, and sometimes watercolors that the Indians obtained through trade or by taking them from soldiers' bodies on the battlefield.

Lasting for nearly 70 years, ledger art was a transitional medium that mirrored the changes in Plains Indian life at the time. The earliest surviving ledger drawings are from the early 1870s and depicted events from the artist's life such as acts of warfare or courtship. By the late 1870s, however, most Plains Indians had been influenced by American culture in some way, and it became apparent in their ledger art. Often, the drawings chronicled the new experiences that came with reservation life and assimilation into American society. The most famous of such drawings are those done by the Plains Indians imprisoned at Ft. Marion in St. Augustine, Florida from 1875-1878. The prisoners were encouraged to sell their work for two dollars a drawing, leading to a demand for Indian ledger art among the American middle class. 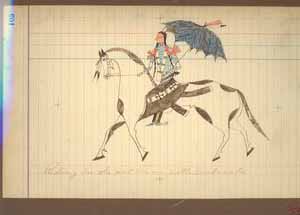 "Riding In the Hot Sun With Umbrella"

By the 1880s, artists across the Great Plains were making ledger drawings specifically for sale to traders, Indian agents, and military men rather than personal use. During this time some artists continued to draw in the traditional style with images of warfare and warrior life, while others experimented with three-dimensional drawings and new subject matter. At this time, more artists began to depict ceremonial and daily life, not only for the benefit of American society who purchased the drawings but also as a way to remember "the good old days" before the Plains Indians were forced onto reservations. The production of ledger art continued as late as the 1930s in some areas, but by the 1910s they were made explicitly for tourist trade or at the request of anthropologists. 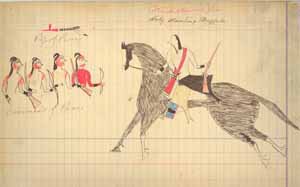 The Red Hawk ledger book comprises the majority of the Plains drawings in the collection of the Milwaukee Public Museum. The collection consists of 105 ink and crayon drawings that the Milwaukee Public Museum purchased in 1897 from H.H. Hayssen of Chuncula, Alaska. According to a handwritten note found inside the ledger, Captain R. Miller originally "captured" the book from Red Hawk at Wounded Knee Creek, South Dakota on January 8, 1891, just days after the infamous massacre at Wounded Knee.

The Wounded Knee Massacre occurred on December 29, 1890 when the Seventh Cavalry of the U.S. Army intercepted Big Foot's band of Mineconjou Sioux on their trek to the Pine Ridge Reservation in present day South Dakota. The Cavalry's mission was to disarm the group of Sioux and transport them to Fort Bennett in North Dakota. Big Foot's band was disarmed at the village of Wounded Knee, but for unknown reasons a single shot was fired in the process. Accounts vary as to who fired first and why, but the gunshot incited the soldiers to fire rapidly on Big Foot's band. Anywhere from 150 to 300 Sioux were killed that day, including many women and children.

A note inside the ledger written in Lakota identifies Red Hawk as a part of Red Dog's band of Oglala Sioux. Red Hawk almost certainly lived in the Wounded Knee Creek district of the Pine Ridge Reservation as census rolls of the area from 1874 - 1905 list two men named Red Hawk, as well as many of the men depicted in the ledger drawings. His involvement in the incident at Wounded Knee is still unclear. On the day of the massacre, a few neighboring warriors attempted to help Big Foot's band and it is possible that Red Hawk was one such warrior. However, it is speculated that Captain Miller acquired the ledger from one of the two Red Hawks found in the census rather than someone involved in the massacre. 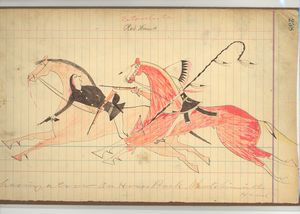 "Chasing Crow on Horseback, Shoots Him in the Head" - Cetanluta (Red Hawk)

The Red Hawk ledger art is drawn in the characteristic Sioux style with no background and few identifying traits for the warriors pictured. The majority of the drawings show episodes of warfare and horse capture, particularly between the Sioux and Crow. Both tribes were longtime enemies of each other and, during the time the ledgers were drawn, conflicts between the two nations were common. The Crow allied with the U.S. Army, fighting and acting as scouts, especially during the 1870s against the Sioux and Nez Perce.

Discrepancies in artistic ability and style indicate that several men besides Red Hawk contributed to the ledger. In addition, many of the drawings include the name of the pictured warrior written in Lakota, English, or both, as well as descriptive captions. The captions are written in a different handwriting from the names suggesting that someone, possibly Captain Miller, added the captions at a later date. 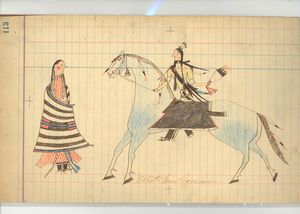 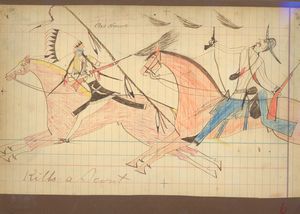 In 1961, the Milwaukee Public Museum published a portfolio containing 36 reproductions of the Red Hawk ledger drawings with an accompanying informational booklet. The portfolio is now out of print, but can still be purchased from the Museum's Out of Print Publications.

For more information on ledger art and to view other collections visit plainsledgerart.org.