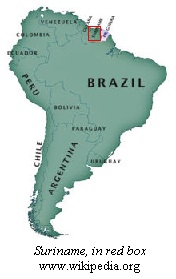 Suriname and the Maroons

Suriname, originally a Dutch colony, has been independent since 1975. This small country, located on the northeast coast of South America, has cultural attributes more in common with Caribbean countries. Suriname has maintained a great diversity of ethnic groups, each with their own strong and longstanding forms of cultural expression such as woodcarving, textile art, music, and ceremonies. Though Dutch is the official national language, over 20 other languages are spoken and recognized by the Surinamese government. Suriname is thus a multiethnic and multilingual country.

Roughly 20 percent of Suriname’s population is Maroon, a term denoting descendants of African runaway slaves from Dutch plantations during the late-seventeenth and early-eighteenth centuries. Maroon culture, because of the people’s African heritage, is strongly rooted in West and Central African cultural traditions, with some Amerindian influences. Maroon groups are widely dispersed across Suriname and extend into neighboring French Guiana. The largest ethnic group, the Ndyuka, are centralized around Marowijne River, which forms the border between French Guiana and Suriname. There are six major Maroon groups. The Ndyuka and the Saramaka, with about 50,000 people each, are the two largest. (The name Ndyuka used to be spelled Djuka; the latter is now considered outdated and pejorative.)

The Ndyuka
The Ndyuka are one of the largest Maroon ethnic groups, and their culture, beliefs, and aesthetic styles are similar to, but vary slightly from, that of the other five Maroon peoples of the Guianas. The Ndyuka speak a Creole language unique to their people, called Ndyuka or Aukan. Most of Ndyuka vocabulary comes from English and several African languages, with smaller contributions from Dutch and Portuguese. The Ndyuka are similar to West African peoples in terms of physical appearance. Since it is rare for Ndyuka women to marry or have children with non-Maroons, they remain genetically close to their African ancestors.

Among the Ndyuka, as in all other Maroon tribes, everyone works on artistic projects in everyday activities, and are admired for their excellent skill in woodcarving, calabash carving, and textile arts. Social relationships and tokens of love and affection are the central reason for the production of art. Historically, only men practiced woodcarving, while women did calabash carving and textile arts. Because object were created as gifts men have large collections of clothes, capes, and breech clothes from wives and past lovers, while women own large collections of wooden objects like food stirrers, stools, trays, and peanut grinding plates. Calabash carving, also prevalent but done mostly by women, produces spoons and dishes with intricate designs for everyday use. Women’s textile arts, produced as exchange gifts for a husband or lover, have transformed greatly as access to trade cotton from the coast has increased. Trends in fashion change quickly, utilizing elaborate embroidery, appliqué, and patchwork, with women freely borrowing from others while making it their own.

Geography
Suriname has a tropical environment and climate, with lush jungle regions and fertile river valleys. There is a wide variety of flora and fauna, which provides Maroon artists with an abundance of resources for their exquisite woodcarving. The climate is relatively uniform due to Suriname’s location near the equator, with an average temperature of around 80 degrees Fahrenheit.

Ndyuka villages and camps, like other Maroon villages and camps, are located along the rivers of Suriname, which provide the primary source of transportation, using individually owned canoes. There are six different rivers located in eastern Suriname on which Ndyuka villages are established: Sara Creek, Upper Commewyn, Cottica, Marowyn, Tapanahoni, and Lawa. Social networks foster a high level of independence and, moreover, every adult may have multiple residencies many miles apart, leading to a great deal of inter-village and camp travel by canoe. Though Maroons have always been dependent on coastal societies for select goods, more recently populations have begun greater travel, and even settlement, in the capital city of Paramaribo, the only city in Suriname, which also serves as a the primary commercial center for the country. 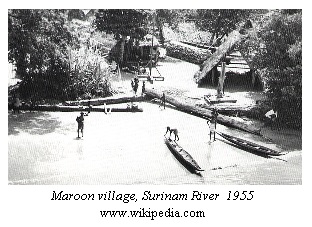 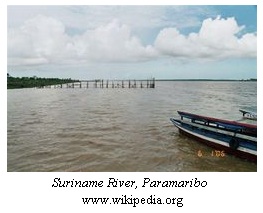