Figure 1. Mural of Aztalan by MPM artist George Peters circa 1937

Aztalan is the largest and most significant archaeological site in the State of Wisconsin. Located on the Crawfish River in south-central Wisconsin, it is near the town of Lake Mills, about fifty miles west of the City of Milwaukee.

The occupants of the site, known archaeologically as Middle Mississippian peoples, may have migrated there just prior to 1100 A.D. There might have been direct migration from the largest known Mississippian city state in North America called Cahokia, near East St. Louis, Illinois or possibly from some other site within the Cahokia social sphere. Regardless, archaeologists have traced Aztalan to Cahokia through the thousands of prehistoric cultural remains excavated from the site.

Aztalan is the northernmost known outpost of the Mississippian culture. These early Wisconsin settlers built large earthen temples, mounds, houses, and an enormous stockade that surrounded a village site area of over twenty acres. Here they hunted, fished, and farmed the land with other non- Mississippian native groups for about a century and a half. By 1250 A.D. the people living at Aztalan mysteriously abandoned the site. This abandonment foretold the eventual demise of Cahokia and the Mississippian lifeway in the Midwest as the focus of the Mississippian civilization shifted to the southeastern United States.

Figure 2. Location of Aztalan in Wisconsin 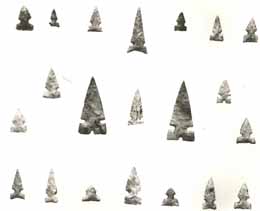