Mississippian Culture, Cahokia, and Its Relationship to Aztalan

Around 800 A.D. Late Woodland Indian cultures in the Midwest made a shift to more extensive maize (corn) horticulture and by 1000 A.D. had organized a complex society referred to by archaeologists as Middle Mississippian. This distinct cultural name is derived from its development in the central part of the Mississippi River valley.

At the heart of this prehistoric Mississippian culture was the city of Cahokia, the largest Native American settlement ever constructed in North America. Cahokia is situated on the Mississippi River floodplain in west central Illinois, across the river from St. Louis, Missouri. At its greatest power around 1150 A.D., Cahokia covered more than five square miles and had a population estimated at over 10,000 people. The center of the site of Cahokia was a diamond shaped metropolis that had a great plaza ringed by large earthen platform mounds, other mounds, and the houses of important families.

Within this great central precinct, the seat of Cahokia's civic and religious power ruled. A huge wooden stockade, complete with watchtowers, enclosed the central 200 acres of the city. At the north end of this great plaza stood Monks Mound, a flat-topped, platform mound that was over 100 feet high and covered 16 acres at its base. It is believed to have supported the main residence of paramount chiefs. 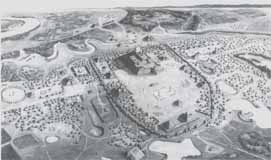 Figure 4. The site of Cahokia as it might have appeared about A.D. 1150.
Credit: Cahokia Mounds State Historical Site, painting by William R. Iseminger.

Monks Mound is the largest prehistoric earthen structure ever constructed in the world. Large construction projects such as Monks Mound indicate a society that was organized and complex.

Food and other resources were not distributed by markets but through ceremonial redistribution during the course of important seasonal ceremonies and feasts, and controlled by the ruling class of chiefs held in the central plaza area.

The Mississippians at Cahokia, as well as at Aztalan, turned hundreds of fertile acres into farmland, and this vast agricultural enterprise formed the base of the Mississippian economy. Besides maize (corn), Mississippian farmers grew squash, pumpkins, and plants such as sunflowers. They also ate many different species of fish, and hunted game (especially deer), and gathered wild plants, berries, and nuts.

The Mississippians traded for many exotic and highly prized objects that were used to help reinforce the status of leaders. Things such as copper, lead (for white paint), deer, and certain types of stone materials such as Hixton Silicified Sandstone were the basis of Mississippian trade interests in the northern frontier, and may have influenced the location of Aztalan as a Mississippian outpost in Wisconsin. Trade and other social and political processes expanded Cahokian influence out into much of the Midwest, as well as, eastern, and southeastern North America.

The Mississippians did not have a written language, but representations of their beliefs were preserved in engravings on stone figurines, shells, ceramic designs, effigy smoking pipes, and stone tablets. The Mississippian belief system expresses concepts that have great antiquity in North America and are still shared by many Native American people today. A dualistic structure underlay their religious beliefs, dividing the real and supernatural worlds into upper and lower levels with the earth and humans in between. The purpose of many ceremonies was to maintain balance between the two. Mississippian life revolved around many ceremonies and rituals, and being an agricultural society, many of these rituals and symbolisms were expressed in artistic themes related to fertility. In the Mississippian belief system, serpents and other underworld deities were associated with rain, water, and fertility and often involved the renewal of the cosmos.

Wood, stone, animal bones, plants, and shell all provided the necessary materials for an array of tools that helped the Mississippians in their daily lives. Some of the most important materials were the various types of chert, a flint-like material that was chipped into knives, scrapers, arrowheads, and large hoes used for maize (corn) agriculture. One type of chert that was utilized for hoe manufacturing specifically was called Mill Creek chert, obtained from quarries in southern Illinois.

While many of the lithic (stone) materials could be acquired locally, the Mississippians also obtained specific stone materials through symbolically important trade. Finely-made arrowheads called Cahokia points were sometimes made out of Hixton Silicified Sandstone obtained from Silver Mound in Wisconsin. Many of these finely crafted arrowheads were found in a large cache in the Mound 72 burial at Cahokia. 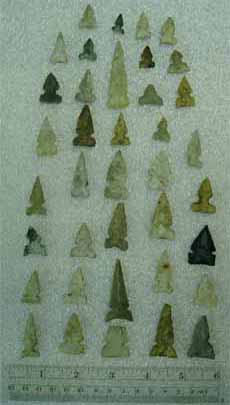 The Mississippians also made numerous types of ceramic (pottery) forms for food storage, preparation, and other special ritual purposes. Many different forms of pans, plates, bowls, beakers, and jars are represented in the archaeological collection from both Cahokia and Aztalan. The Ramey Incised bowl with its interlocking scroll motif and black slip color is the most recognizable. Many examples of this type of pottery have been discovered at Aztalan and helped to further identify Aztalan as a Middle Mississippian site related to Cahokia.

The Interlocking scroll motif is believed by many researchers to be symbolic of fertility and life regeneration, and Ramey vessels may have been used for special cleansing medicines in these rituals.

Mississippians left behind many examples of their physical appearance. Tattoo patterns on the body and face, hairstyles, and clothing from animal hair and natural fibers are depicted on shell gorgets. Actual recovered pieces of adornment include ear spools and shell beaded capes found at Cahokia and Aztalan.

The Mississippians played an important game we call chunkey. It involved throwing a spear at a small, rolled stone disk. The main object was to throw the spear closest to where the "chunkey stone" stopped rolling. These wheel-like "chunkey stones" are found at many Mississippian sites including Aztalan. This game is also similar to one played in Mesoamerica, and carried great political and social importance.

Warfare was a large part of Mississippian society and evidence to the fact can be found in many Mississippian images that depict warriors with war clubs holding the severed heads of their victims. It is also seen in the large fortified stockades that surrounded both Cahokia and Aztalan. These formidable walls were made of huge wooden posts that were interwoven with branches from trees such as willow, and plastered with a mixture of river clays, mud, and grasses in the wattle and daub technique. At Cahokia, this enclosure enclosed roughly 200 acres of the main site; at Aztalan's height around 1150 A.D. (a much smaller site), only about 20 acres were enclosed. Large buttresses located at intervals along the wall helped serve as watchtowers and also helped support the structure itself. Two sets of progressively smaller enclosures subdivided the town and may also have segregated it into different social and ceremonial spaces, possibly reflecting Aztalan's expansion over time.