Today, Aztalan is a state park managed by the Wisconsin Department of Natural Resources whose goal is to preserve and interpret the site. Through archaeological investigations and historical work, many of the mysteries of Aztalan have been solved, but many questions still remain. For example: Who were the people who occupied Aztalan before the Mississippians? Why did the Mississippians come to Aztalan? What was the relationship of these people to others, such as the Late Woodland Effigy Mound builders and later, the Oneota? What caused the collapse of Aztalan? These and many more questions are being considered by current researchers, and almost every year, there are new discoveries that add to the understanding of the site.

Lack of funding is a constant threat to the preservation of Aztalan. A Friends of Aztalan State Park group was formed in 1994 to help assist the Wisconsin Department of Natural Resources with fundraising, tours, and other park programs that promote increased public awareness. An advisory board of archaeological experts was also created to help guide the park in the most pressing research and interpretation matters. With input from this group, the Department of Natural Resources developed a long-range plan. A main goal of this master plan is to build an interpretive center which will assist in telling the story of Aztalan. The Friends of Aztalan State Park group, which is lead by former Wisconsin state archaeologist and Aztalan expert Robert Birmingham, has set a fundraising goal of one million dollars to assist in the building of this interpretive center. No doubt future excavations will reveal more information and questions to be answered. 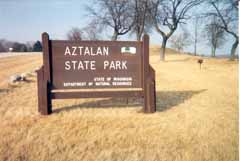