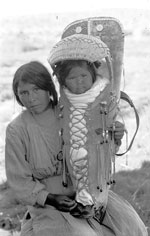 The vast majority of American Indian baby carriers were made of hide and cloth, or woven from woody stems and shoots.

These are referred to simply as “cradles” and “cradle baskets.” While the term “cradle” better encompasses the variety present in Native carrier construction, it is also frequently used to describe carriers used by non-Native cultures. “Cradleboards” are the most commonly recognized type of American Indian baby carrier, and as the term implies, include a wooden component that was most frequently a flat backboard. Because the term is specifically associated with American Indian cultures, it continues to be used by researchers and Native peoples as a means of easily identifying all types of Native cradles. Both are acceptable terms for these objects, but when specifically discussing styles not involving a board, “cradle” is the most suitable description.

Cradle making was often reserved for the most accomplished artisans, and cradleboards were some of the most costly items to produce, usually given as gifts. In fact, few children had a cradle created for them. If a family didn’t have a cradle of their own, one was often borrowed from friends or distant relatives until the child outgrew it. Those families that were gifted with a cradle continued to use it for generations.

Whether on cradleboards or in cradles, children were often swaddled in cloth, laid on a cushion of soft plant material, and then lashed securely. This binding often prevented the movement of arms and legs, which imitated the feeling of being held. Children spent the majority of their first two years of life in a cradleboard, only removed for short periods of time. Cradleboards served the roles of both bed and carriage. With the child safely secured, mothers and family members were free to complete daily chores, either with the cradle strapped to their backs, or leaning upright against a stable object. This allowed the child to socialize with the group, and be easily accessible, should it need feeding or changing.

While all cradleboards had the singular purpose of securely carrying a child, some cradleboards were viewed as symbols of kinship and Native identity, and have often been considered by others as works of art. Cradles held both symbolic and practical purposes, so great care was taken in their creation; some took months to complete. While modern technology provides alternatives to the cradleboard, the additional communal aspects have been influential in the maintenance of cradleboard traditions. 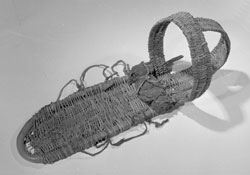 The Museum’s collection of cradles, cradleboards, and associated accoutrements includes nearly 200 items. The Museum possesses 63 cradles and cradleboards in complete or nearly-complete condition, which come from every cultural area in the United States. A great number are attributed to the Ojibwa/Chippewa, Winnebago/Ho-Chunk, Iroquois, and Potawatomi tribes of the Northeast (Great Lakes) area, as well as Western tribes like the Paiute, Pomo, and Kwakiutl, and the Hopi in the Southwest.

Some tribes created their cradles with multiple removable pieces, so cloth wrappers and ties, bedding, or umbilical amulets that were often attached to the board itself also make up a significant part of this collection. While integral components of the cradle, they cannot always easily be attributed without corresponding pieces, and are not included in this webpage.

Toy and model cradles were created for young girls to use in play, which helped to prepare them for their roles as future caretakers. Frequently decorated and usually including dolls, toys often differ in size and construction from their practical counterparts, so they have also not been included in this survey.