One of Aztalan's most famous and intriguing discoveries was the burial of a young woman known as the "Princess Burial." This large conical burial mound measured about 50 feet in diameter and stood about six feet above the ground when it was originally constructed. 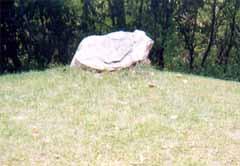 This mound was located at the end of the long line of ceremonial conical post mounds just northwest of the main enclosure. This burial was one of the most unusual burials recorded in Wisconsin because it contained the remains of a female in her early twenties adorned with 1,978 perforated discoidal local clam shells and a few imported Gulf coast marine shells. These shells were part of a series of three garments that had been wrapped around the woman. Each of the belt wraps was about four feet in length and six inches in width; one was wrapped about the shoulders, the second about the waist, and the third wrapped twice about the lower body around the legs and the ankles. The beads on the garments graded downward on her body from larger beads to smaller beads. There were also 18 other beads of the same kind that had been tossed and scattered in the burial context making the total 1,996 crafted beads in all. The "princess" was placed on her back in a fully extended position at a depth of nearly 10 feet from the original surface of the mound.

The grave measured about eight feet in length by three feet in width. The burial had been covered with earth, and then with a layer of white sand about twelve feet in diameter in the center of the mound. Barrett speculated that the burial might have contained other perishable artifacts such as wood or a bark covering that had decayed long ago based on the dipping of this layer of sand that was originally level with the surrounding surface.

The presence of so many shell beads is somewhat reminiscent of the famous bead burial of an important individual at Cahokia's mound 72. Here, the person was laid on a platform covered with thousands of similar discoidal shell beads in the shape of a large bird.

The Aztalan individual was dubbed the "princess" by Samuel A. Barrett because he reasoned that her status, as exhibited in this elaborate and distinct burial, was likely inherited, but her actual status is unknown. It could be that she was from an elite Mississippian family that ruled Aztalan or perhaps she was part of a chiefly lineage.

Her status, and the reason she was buried where she was, is a mystery. Barrett found no other artifacts with the burial that could help date it, but such beaded burials are not known for the indigenous Woodland people in Wisconsin. Examination of the "princess's" bones revealed a slight curvature of the spinal column that was most likely the result of an early arthritic condition. There has been speculation that this abnormality might have caused her to be looked upon differently and perhaps even revered.

The Milwaukee Public Museum reconstructed this elaborate burial for a museum exhibit, but due to increased awareness and sensitivity about Native American burial rights, the exhibit was removed in July, 1973.