North America was colonized by several European powers and these various nations brought a wide assortment of goods to the continent to be traded with native groups.

Many ordinary objects from Europe had a powerful market value for American Indian tribes. These items and their associated purpose were often adopted and adapted by native peoples. Such is the case with silk ribbons, which were used by Woodland Indians to create a form of appliqué decoration not seen before in Europe. 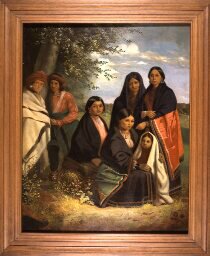 E65663/27931 - Painting of Menominee women by Samuel M. Brookes, 1858.This painting shows the early use of silk ribbons as a decorative trim to garments, such as skirts and shawls.

The silk ribbons used in native ribbonwork were brought by French traders to the Great Lakes region in the later part of the 18th century. After the French Revolution, extravagant clothing decorated by ribbons quickly went out of style in Europe and the unwanted ribbons were exported to the Americas. In addition to the silk ribbons, tribes in the Great Lakes area traded for metal knives and cookware, bells, small mirrors, glass and brass beads, guns, alcohol, and wool blankets. 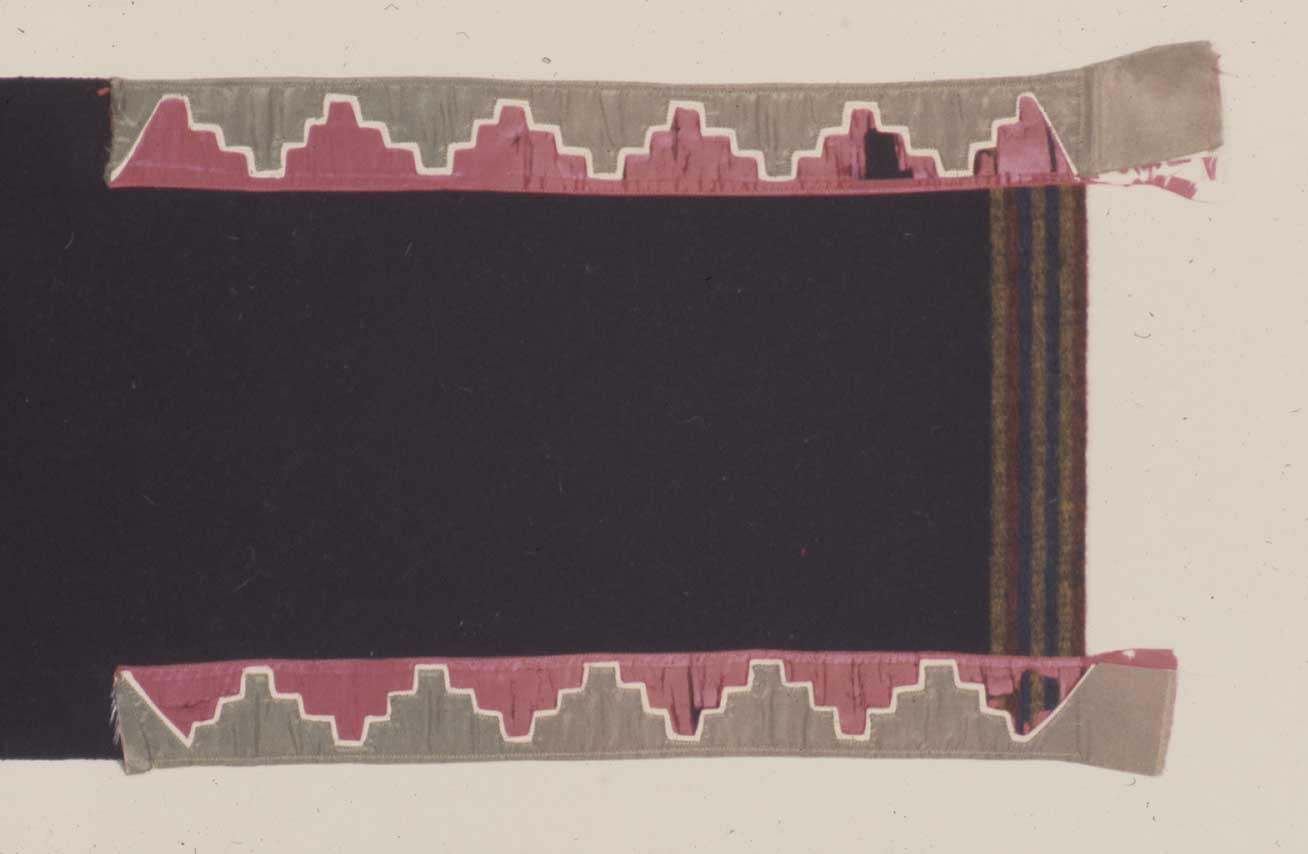 The exact origin of ribbonwork appliqué is unknown, but by the beginning of the 19th century, Europeans had observed this unique style of decoration among several tribes. The first recorded instance of ribbonwork appliqué was on a Menominee wedding dress made in 1802. Ribbonwork reached its peak in the last quarter of the 19th century, having moved out from its epicenter in the Great Lakes to several tribes in the Prairies, Plains, and Northeast. 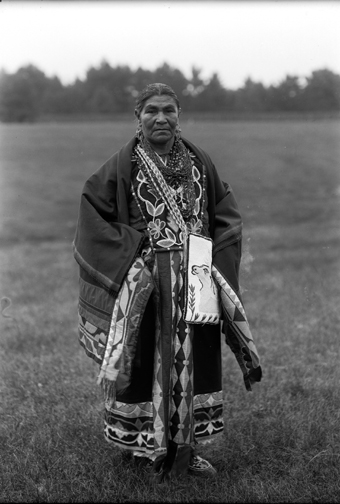 Ribbonwork appliqué initially lasted for just a century, the craft quickly dying out in the early 1900s. This time period coincided with the dislocation of many tribes from their traditional homelands and ways of life. Thus the appliqué technique was not practiced in many groups, or was only done by a few individuals.

Due to government interest in native art in the 1930s, federal agents began to collect information about the traditional production of ribbonwork among the tribes that originally produced it. Museums at this time also began to display early examples of ribbonwork. By the 1970s, the same time as a native cultural resurgence and Indian activism, ribbonwork was again being produced by various Prairie and Plains tribes.

Since then, ribbonwork has regained popularity in a few of the Woodland groups. The production of ribbonwork has changed significantly from its traditional form, since the use of modern conveniences, such as sewing machines, has made it easier to create. Ribbonwork, like other native art forms, also has an economic value for those who sell it in the non-Indian market. Despite these modifications from its traditional form, ribbonwork is mainly produced for American Indians to be used as decoration for items worn at native cultural events, especially powwows. 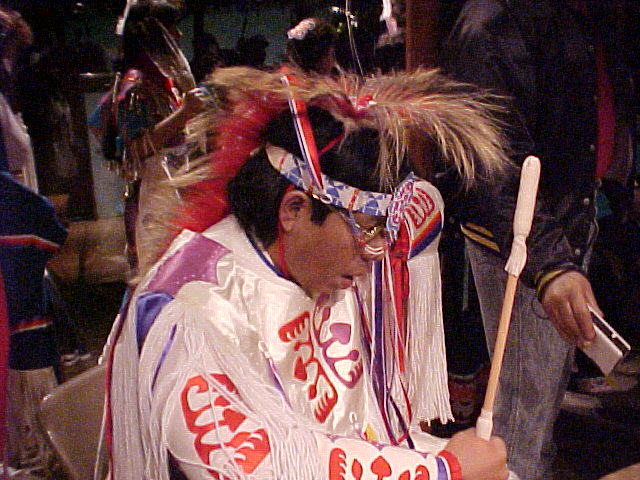 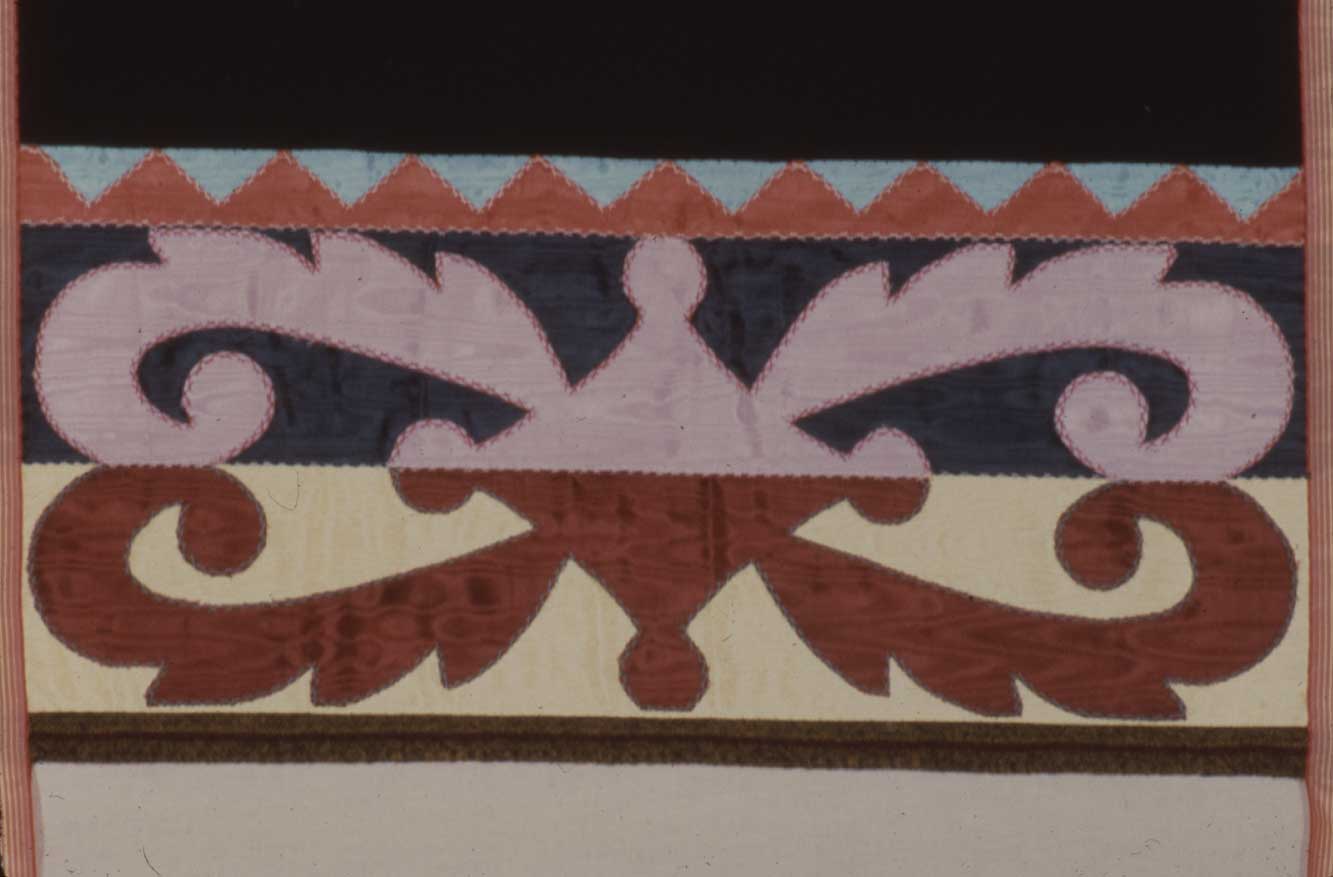 Ribbonwork appliqué involves sewing many strips of colored ribbon onto another base fabric to serve as a trim or decoration. Patterns are created in the ribbonwork strip by cutting or folding the material at different levels of ribbons to reveal many colors of cloth.

Diagram of a pattern ribbon (A)

The ribbonwork strip is created using two components: an uncut base ribbon and a secondary cut or folded pattern ribbon. The secondary ribbon is attached to the base ribbon to reveal a pattern made from the color of the base ribbon. Highly intricate ribbonwork patterns contain more than two ribbons and create a pattern of several different colors. Contemporary ribbonworkers have been recorded to use up to twenty different ribbons. The ribbonwork strip can also be embellished with other materials, such as beads or shells, to enhance the design.

The original ribbons were made of brightly colored silk and the appliqué was hand-stitched on darkly colored wool, broadcloth and sometimes leather. Due to the nature of the material, early productions of items with ribbonwork are extremely perishable and fragile. Contemporary ribbonworkers utilize the sewing machine to create more complex designs at a quicker pace and may also substitute silk ribbons with the less inexpensive taffeta, grosgrain, or satin ribbons. 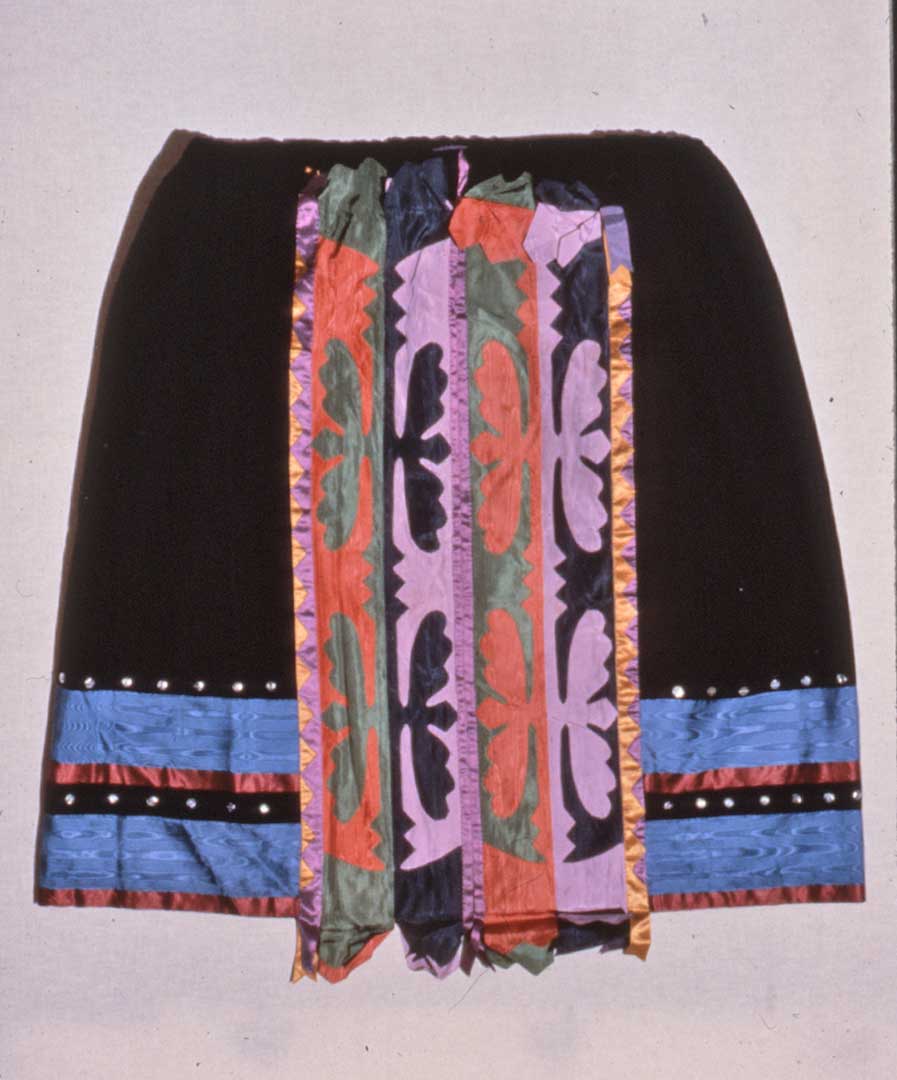