The earliest historical documents regarding Sami culture (Tacitus A.D. 98 and Procopius A.D. 550) portray them as hunters and fishers.

However, there is reason to believe that ancestors of the present-day Sami inhabited the area by at least the birth of Christ. There is little mention of them until the ninth century in King Alfred's account of the Norse chieftain Ohthere's tribute from coastal Sami (Stephens 1984). This and the few reports in the next few centuries portray the Sami as hunters and fishers. It was this Viking period (A.D. 800-1100) that witnessed the highest levels of expansion and population growth in Samiland. Trade was extensive and Sami sacrificial sites in Swedish Lapland contain hundreds of metal objects from the Nordic region, Russia, and Eastern and Western Europe. Sami seasonal settlements were abandoned in the 14th century due to an expansion of Swedish state control and agrarian expansion, the influence of the Church, and also the effects of the Little Ice Age and the Black Death. The colonization of Sami lands by Nordic populations ushered in the Sami transition to reindeer herding and nomadism (Broadbent, 2006).

Spoken by about 35,000, the Sami language is part of the ancient Finno-Ugric language family and most closely resembles Finnish, Hungarian, Estonian, and several lesser languages spoken in northwestern Russia (Field Museum, 6). There are ten Sami dialects, Northern Sami being the largest; is spoken in Norway, Sweden, and Finland. The other dialects, however, have only a few hundred speakers each, and are thus highly threatened.

Though the birthplace of the Finno-Ugric languages cannot be located with any certainty, central and northern Russia west of the Ural mountains is generally assumed to be the most likely spot, perhaps around the third millennium BC. There is evidence that before the arrival of the Slavic speaking tribes to the area of modern-day Russia, speakers of Finno-Ugric languages may have been scattered across the whole area between the Urals and the Baltic Sea, c.4200-c. 2000 B.C. (Wikipedia, 2006). 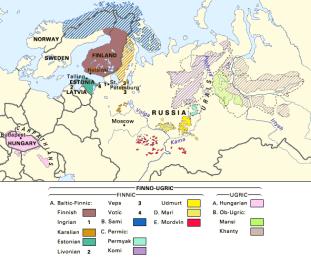 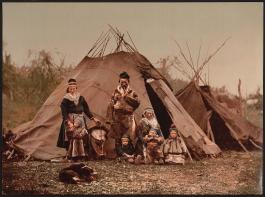